Metro Trains Melbourne has asked the booth’s octogenarian owner to find a new site after more than 50 years at the station. 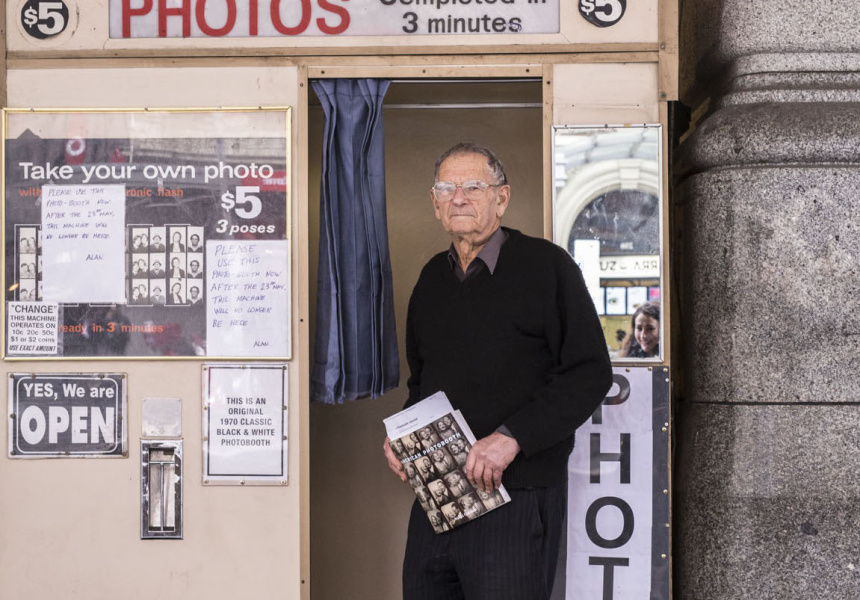 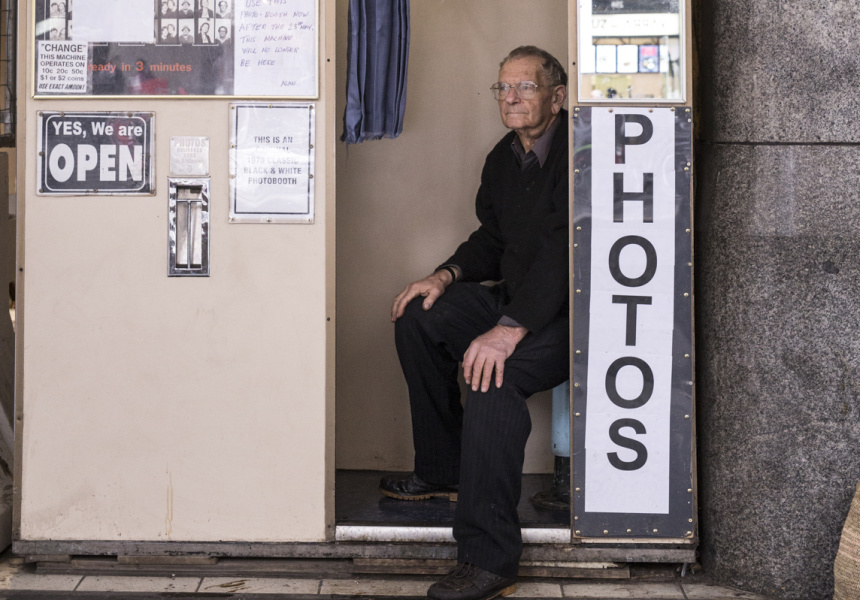 The iconic black-and-white photo booth at Flinders Street Station may be on the cusp of developing its last three-framed print. The photo booth has been operating at the station for 56 years – its current owner, Alan Adler, bought it 46 years ago with his wife Loraine.

In the past few days Adler put up a handwritten sign on his machine with a simple message, “Please use this photo booth now. After May 23, this machine will no longer be here.” Some of the photos next to the sign are test prints of Adler as a younger man.

On Monday morning Adler – who turns 86 in a couple of days – told Broadsheet he was asked to remove the booth “as soon as possible” by Metro Trains Melbourne business development manager Marty McConnell early last week.

Adler says he walked around the station with McConnell a few days later to look for a new site, but the pair were unable to agree on a location. Adler says McConnell told him some of his proposed new sites were unsuitable as they fell on Melbourne City Council land.

"Flinders Street Station is undergoing works to improve the amenity and accessibility of one of our city’s great cultural icons," Metro Trains spokesperson Andrew Nelson told Broadsheet. "We understand the significance of this photo booth and are working closely with the owner to find a new location."

Broadsheet understands that Metro Trains has given Adler another month in his current location until a new site is agreed upon. The aforementioned works are part of a $100 million station upgrade that includes the reconfiguration of an entrance on Flinders Street that will see additional myki gates installed where the photo booth is currently set up.

Adler says he is unhappy with how the eviction has been handled given his long history at the site. Although the images are in the hands of countless owners, he might be responsible for one of the largest collections of vernacular photography ever captured in Australia.

While it's impossible to confirm Adler's estimation, the photo booth has undoubtedly been a popular stop-off for commuters for decades. It not only solidified memories for those who put themselves in front of its flash, but also the Adlers themselves.

“We’ve been around the world. We’ve met other photo operators. We’ve been to the factory where they made the machines three times," Adler says. "We have friends all around the world involved in the black-and-white photo business."

Despite being saddened by Metro Trains's consultation process, Adler admits that business has been far from booming. Technological advances in digital photography have relegated the slow and imperfect process of his machine to a nostalgic novelty.

“I can’t sell it either because it’s more of a hobby for me at this point. You can’t make money out of it anymore because it’s all been superseded by digital cameras. I think it’s close to being the end of the line for black-and-white photo booths in Melbourne,” he says.

Despite their antiquated appearance, photographs produced with traditional black-and-white printing techniques still last far longer than their digital and inkjet counterparts. The silver-halide particles embedded in black-and-white photographic paper are able to hold an image for more than 100 years if stored properly.

“People love to use it. The photos are terrific. I got some taken for my 50th birthday party about 30 odd years ago. Because they’ve got a silver base they last forever, they simply don’t fade. The digital photos these days start losing their quality after three or four years,” Adler says.

He is worried that, if the booth is indeed removed at short notice, his stockpile of specialised and expensive chemicals and photographic paper will go to waste.

“I’ve got this huge supply of paper and about six months to get rid of it, otherwise it’ll just go down to the bloody tip,” he says.

At the peak of their business the Adlers operated 16 machines around Melbourne at locations including Highpoint, Chadstone and Southlands.

“There was a lot of counting because it was all coins, and it used to come in 20-cent coins,” Loraine Adler recalls. “For god’s sake were we glad when the two-dollar coin came in. What a relief."

“It’s been quite rewarding,” Alan Adler. “We made quite a bit of money when it was in its boom time about 10 or 15 years ago. I don’t make any money anymore out of it.”

Regardless, he wants to stay, with his booth, at Flinders Street – its home since the early 1960s. He's very clear on that. “I do not want to leave."