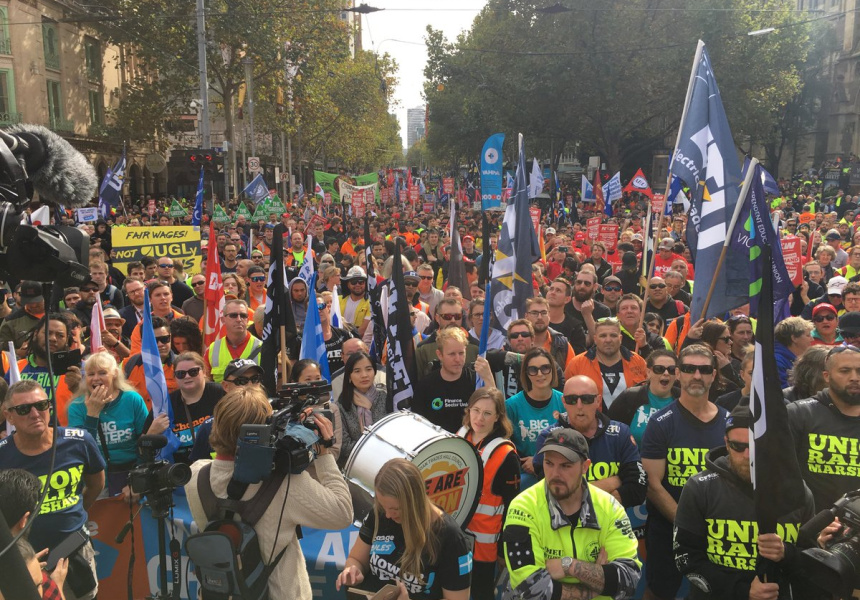 This morning at 10am around 60,000 workers and union members gathered in Melbourne’s CBD to show their dissatisfaction with elements of the 2018 budget, and to demand new pay agreements.

Trams running through the CBD have been affected by the protest.

“Essentially any route that comes through the city is affected today as a general rule. We’re monitoring where the rally is at any given point and adjusting services in real time to make sure that we keep as many trams moving as we can on as much of the networks as we can,” Yarra Trams spokesperson Simon Murphy told Broadsheet.

A Metro spokesperson told Broadsheet trains were not being affected.

The three-hour protest began at Trades Hall and moved through the city down La Trobe Street before stopping at Melbourne Magistrates’ court and heading back towards Lonsdale Street.

As reported by the Age, Victorian Trades Hall Council Secretary Luke Hilakari addressed the crowd outside outside Melbourne Magistrates’ court.

"Last night's budget did nothing for working people. Malcolm Turnbull threw crumbs to Australian workers. Crumbs are no longer good enough for working people – we want the whole cake. We want our penalty rates back, we want equal pay for women,” said Hilakari.

"Police were pleased with the behaviour at today’s rally in the CBD, with no incidents, injuries or arrests taking place," Victoria Police told Broadsheet in a statement.

View from the stage at Flinders Station. People are all as far as the eye can see down Swanston Street #ChangeTheRules pic.twitter.com/58Yte6pC4s

For updates to Yarra Trams services head to yarratrams.com.au.