A CBD Building Is Getting a New $2.5 Million Green Roof Oasis

The research hub will eventually share its findings with the public. 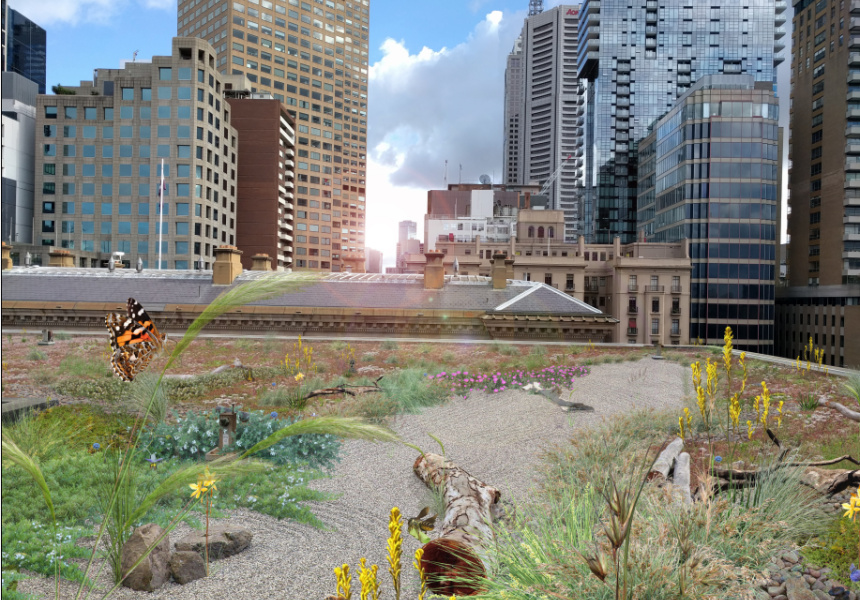 Photography: Courtesy of City of Melbourne
1/2 Lush greenery and diverse plant life will take over the roof of 1 Treasury Place to create an urban oasis, in a joint $2.5 million Melbourne City Council and Victorian Government initiative (not-for-profit Hort Innovation, a horticulture research and development company, has also contributed funding).

The rooftop will serve as a demonstration and research site to investigate the feasibility and design possibilities for the creation of green urban infrastructure in Melbourne. Green roofs have been shown to reduce greenhouse gas emissions, lower energy costs, boost stormwater retention, subdue heatwaves and improve personal wellbeing. There are currently only 40 green roofs in Melbourne.

Associate Professor Nicholas Williams, an ecologist at The University of Melbourne, is leading the team of researchers on the project. Part of the research includes determining why Australian cities have lagged behind those in Europe and North America when it comes to green roof uptake.

“In 2007, I realized that green roofs were quite common overseas, but we didn’t have any, really, in Australia at that time,” Williams tells Broadsheet. “If they’ve got lots of benefits, why aren’t there more green roofs on Australian buildings? That’s what we’re trying to find out.”

Williams cites Toronto as an example, explaining that by-laws have made the inclusion of green roofs mandatory for certain types of new buildings.

He hopes the Treasury Place project can set an example and serve as a model for similar projects. Findings from the research will eventually be shared with the public.

“We’re trying to encourage building owners and managers to retrofit them to existing buildings, where possible, and also incorporate them into new buildings,” says Williams.

Climate change is an issue that needs to be tackled in Australian cities that are prone to heatwaves, he says. “We know that heatwaves are a major killer for Australians. What green roofs do is keep moisture in air, so that will help cool the city,” he explains. “If there are plants on the roof, they will absorb the heat and reflect it back into the atmosphere instead.”

With most of the world’s population now living in big cities, Williams says it’s important that more sustainability initiatives are integrated into urban spaces.

“If we could make our cities more sustainable, by using green infrastructure, incorporating biodiversity, and letting natural systems do a lot of the work for us, it’s going to reduce the impacts on the surrounding landscape and the world globally,” he says.

The design of the green roof will be by Aspect Studios, also behind Sydney’s The Goods Line and the new Sydney Fish Market. Construction on the 1500-square-metre project is expected to begin early next year and be completed by June 2020.

Other urban infrastructure projects have been announced in recent months, including Melbourne Skyfarm in Docklands and Green Spine in Melbourne’s CBD, as well as the Eveleigh Treehouse in Sydney.