Dreamed up in a moment of desperation, the inaugural Royal Prestbury Cup kept local families entertained for days and raised close to $1000 for charity. Now the guy who came up with the idea is urging other people to give it a go in their community. 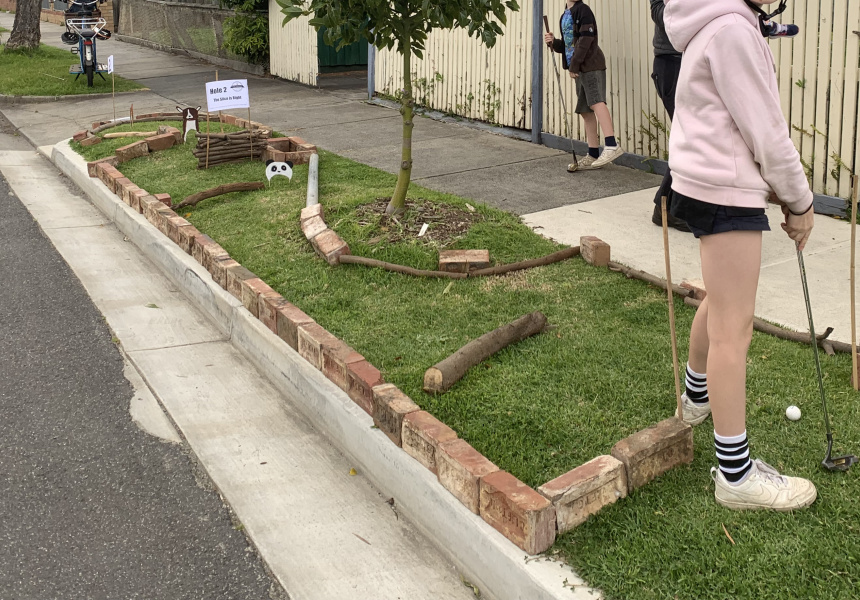 The Boredom Files is a Broadsheet series about all the creative, eccentric and hilarious ways people get themselves through lockdown.

School holidays. They’re a blessing and a curse for parents and children alike. There’s more quality time together, but also plenty of boredom, frustration and monotony mixed in. And lockdown has only intensified the bad bits.

With kids aged 11 and 13, app developer Ian Hillman knows it all too well. But earlier this month he struck on an idea – one that galvanised his local community, kept families entertained for days and raised nearly $1000 for the Royal Children’s Hospital.

“I was sitting in the garage at about 10.30 on a Tuesday night, looking down the barrel of school holidays, and just wondering how on earth I was going to fill in this time, during the Covid times,” Hillman says. “Then I saw my putter sitting in the corner.”

He decided to build a minigolf hole on the front nature strip, and wondered if any other parents might want to join in. So he posted in a couple of local Facebook groups.

Ten days later, on the Grand Final public holiday, 20 Covid-safe holes had been built on nature strips around Preston and Thornbury. Families used whatever they had on hand: PVC pipes, terracotta roof tiles, pot plants, lengths of timber, astroturf and plywood. Some kids painted signage.

“It filled in so much time beforehand – it was kick-arse,” Hillman says.

The 9th hole, Bracken Birdie, featured a halfpipe-style ramp to launch balls onto a park bench, roll along its length and down a pipe at the other end. The 14th hole, Holey Cow, had kids hitting their balls into the mouth of a papier-mache cow, and watching them roll out its backside. Other holes had punny names mainly for parental amusement, including Who’s Your Caddy?, I Like Big Putts and Bogie Nights.

On the day parents handed out scorecards, and a dedicated QR code linked to an online map showing the location of every hole in the inaugural “Royal Prestbury Cup”. Players were encouraged to donate a gold coin for the Royal Children’s Hospital, which came to “just shy” of $1000 all said and done.

Play carried over to Saturday and Sunday, as families weren’t in a hurry to dismantle their holes. The event was such a success, there’s talk of making it an annual thing – and maybe even timing it just before hard rubbish collection, making the holes easier to clean away.

Hillman reckons more people and community organisations should give it a crack, too, whether to raise money or just entertain local kids.

“It really does give you a sense of purpose; something to do,” he says. “Hopefully some people will read this and go, ‘Yeah, I can do that.’ Because it was really easy to pull together.”