Last week a $22,000 piece of publicly funded art, in the form of a giant, skull-faced banana, was the victim of an attempted decapitation in Fitzroy. 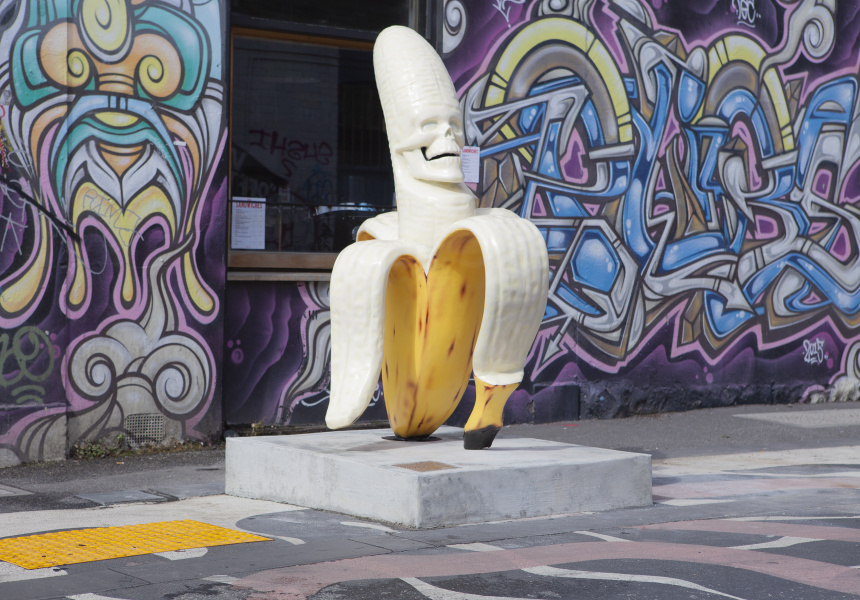 On Saturday November 27, Victoria Police reported a 1.8-metre-tall fibreglass sculpture of a skull-faced anthropomorphic, semi-peeled banana had been vandalised on Fitzroy’s Brunswick Street.

The piece, by artist Adam Stone – one in a long history of contentious banana related art – had only been in place on the corner of Rose and Brunswick streets for two weeks when it became the victim of an unknown vandal, who took to the piece with a hacksaw on Friday night.

The incident was captured on CCTV and released the following day by Victoria Police. The banana survived the attack. Council officers inspected the work and Stone patched it up over the weekend. The piece took 12 months to make and was commissioned by the City of Yarra and financed by a grant from the Traffic Accident Commission.

Stone said the foreboding fruit – made from steel, fibreglass and car paint – was conceptually inspired by a brief online fruit-carving trend dominated by Japanese artist Kishimoto Takehiro, as well as the kitschy roadside behemoths of Australian highways – the Big Banana, Pineapple, Prawn and friends. The work, he says, also speaks to the “innate hubristic tendency in Western culture towards unsustainable excess – you’re peeling back to the darker side”.

“Melburnians, like most urban dwellers, have a history of defacement of public works,” says Justin Clemens, an associate professor at the University of Melbourne’s school of Culture and Communications. In the early 1980s, the much-maligned “Vault”, a geometric (and, coincidently, banana yellow) steel sculpture by artist Ron Robertson-Swann, he says, was “commissioned at great expense, widely abused, graffitied, hounded out of the (then) City Square, kept in a vault for years, before it finally found some rest and quiet in the piss-stained sands next to the Australian Centre for Contemporary Art”, in Southbank.

“[Public art] is an assertion of money and power, as well as distraction and ornamental surplus,” says Clemens – which is also why public works tend to attract acts of wilful destruction. Most taxpayers, Clemens reckons, can more easily see the “multiplicities of use and enjoyment” provided by a new bike path than they can while observing a menacing, inanimate banana that “just sits”.

“$22,000 sounds a lot,” he adds. “If you break it down, of course, it’s almost nothing” compared with what a bike path might cost. The banana sculpture also provided employment to a painter, an engineer, a welder and other sole traders and small businesses as part of the council’s overall post-Covid recovery strategy.

Stone says he doesn’t recognise the person in the video and has no idea what prompted the attack, except possibly the banana’s generally “loaded significance in popular culture.” More plausibly, he suggests the incident “was probably just a bit of displaced youthful male energy – he probably thought it would be funny”.

“Bananas are hilarious – totally phallic, weird colours, kinda edible but also kinda abject – and if you slap a skull onto one, that just makes it funnier,” says Clemens, who isn’t surprised Stone’s work attracted this kind of attention.

While Stone will now have to spend some of his summer break undertaking banana repairs, he concedes the attack has lent the work an unexpected gravitas, stirring up conversations about public funding and the arts. And while the attack left him feeling “a little tender”, Stone says he would prefer to have created “something that people notice and gets people talking rather than just disappearing into the fabric of the street”.

As of December 1, according to a Victoria Police spokesperson, there have been no further developments and the case remains ongoing. 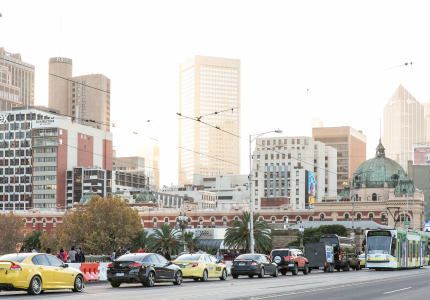