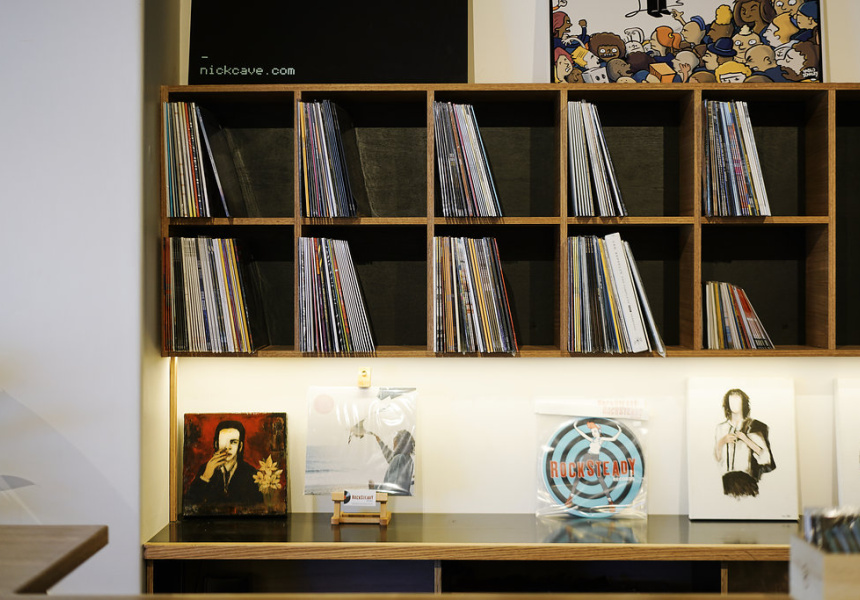 Pat Monaghan has been selling records for more 30 years. In that time, he’s seen vinyl’s popularity rise, drop and rise again. Beginning in Perth at Dada Records, Monaghan then found himself behind the counter at Melbourne’s Au Go Go in 1994. After its closure in 2003 and a subsequent 14 years at Basement Discs, Monaghan’s dream of owning his own store was realised with help from wife Jay Magee.

Were it not for the neon sign shining over the Elizabeth/Lonsdale Street intersection, you might miss Rocksteady completely. Heading into Mitchell House and up the elevator, you’ll eventually find the space; swathed in red linoleum and colourful posters. Records – most of which are new, ordered from both Aussie and international distributors – sit in custom-made timber shelving.

True to its name, Rocksteady is big on reggae and Caribbean music. There’s funk, soul, rock, jazz, hip-hop and indie records too, including plenty from local acts. You’ll also find a few turntables, books, prints and CDs littered through the shop. New stock comes in every day.

Close to established favourites such as Wax Museum and Off the Hip, Rocksteady makes for another great stop on the CBD vinyl circuit.