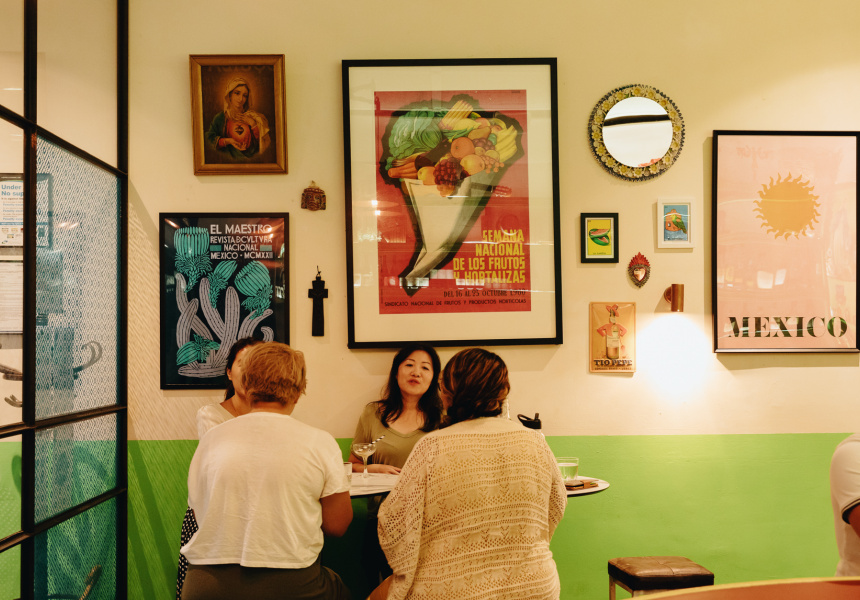 Mexican chef Sarai Castillo spent seven years living and working in Australia, including five years with Frank Camorra’s Movida group. But, like so many other international visa holders, she was ineligible for any financial assistance from the government during Melbourne’s 2020 Covid lockdowns.

As a means of keeping herself – as well as her international colleagues – employed during those periods, Castillo and Camorra launched Comida Corrida, a series of takeaway food packs centred around her home-style Mexican cooking. The project was named after the Mexican equivalent of a prix-fixe menu.

It was so well received that Castillo was given a permanent platform as head chef at Tres a Cinco, a Mexican bar and eatery showcasing the best of her lockdown dishes. It’s at the former site of Bar Tini, Camorra’s late-night, Spanish-inspired bodega, next to Movida on Hosier Lane.

But Tres a Cinco is more than just an opportunity for Castillo to flex her culinary muscles. It’s also a way for her to spotlight the variety and regional nuances of Mexican cuisine. She’s serving a little bit of everything from around Mexico. In addition to the aforementioned beef tacos, there’s a vegetarian alternative with fried cauliflower and pico de gallo; a battered-fish taco with jalapeno cream; and a taco hailing from the Yucatán Peninsula that’s stuffed with pulled pork braised in orange juice and achiote paste.

Also expect some of Castillo’s childhood favourites; the chilaquiles rojos is a flavour bomb of pan-fried tortilla chips doused in spicy red chilli sauce and topped with feta and a fried egg. It’s a traditional Mexican breakfast, but here it’s available all day. There’s also esquite, a Mexican street-food snack of corn (off the cob) with aioli and lime; and tamales, steamed parcels of masa (maize dough) stuffed with prawn and chorizo. For dessert there are two options – a jiggly chocolate flan or a take on Castillo’s most-loved childhood dessert, a Mexican icebox cake called lemon carlota.

The drinks selection is just as considered. There are 20-odd cocktails, all based around tequila or mezcal (including eight different Margaritas) with the exception of two spritzes. It's the spirits list that really shines, though. In addition to tequila and mezcal, you'll also find less common agave-distilled products – including sotol, raicilla and pechuga.