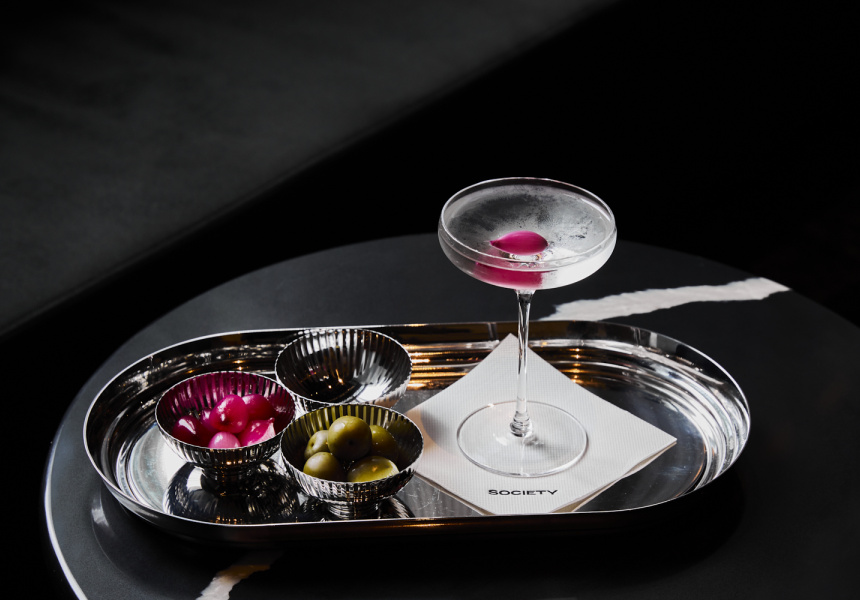 Chris Lucas is behind some of Melbourne’s best-loved venues, including (Chin Chin, Baby Pizza, Hawker Hall and Kisumé). But Society is his biggest opening yet.

The sense of occasion starts once you get to 80 Collins. Look for the ground-floor elevators, between which “Society” is etched in big block letters. Once you’re upstairs on level two, the first thing you’ll spot is the dining room. Specifically, what’s above the dining room: three colossal crystal chandeliers hang from the sky-high ceiling. They mimic the curves of the charcoal booths and jet-black tables below.

The lounge next to the dining room, which is reserved for walk-ins, has a smoky mirrored ceiling, plush horseshoe-shaped chairs and a curvaceous banquette. There are also plenty of seats up at the angular marble bar (also no reservations). Private diners have some impressive options, too, including a striking room with 20 green velvet chairs and a spotted-gum table. A hunk of white-swirled black marble sits at one end, while hidden behind it – in what looks like a cupboard – is a state-of-the-art-kitchen..

Although chef Martin Benn and maitre d’ Vicki Wild have left Society, their influence on the restaurant is clear. Benn’s bite-sized caviar pretzel was a best-seller at opening. As was Maple, a dessert: a stunning cluster of edible leaves in a jelly pool flavoured with sauternes, a French dessert wine. With the exception of some staples, the menu changes constantly. And despite its fine diner facade Society is a la carte only, which makes it suitable for anything from a quiet weeknight dinner to a long, lavish catch-up lunch.

Then there’s the immaculate service: when you arrive, your jacket will likely be whisked away before the elevator doors have fully opened. Your drink order will get taken shortly after that. We recommend choosing a cocktail: they’re overseen by 2018 World Class Bartender of the Year, Orlando Marzo. Classics start at around $26, or they’re $145-plus when made with vintage spirits from as far back as the ’50s.

Just as much attention has been paid to the filled-to-the-brim wine cellar, where Lucas Restaurants’ all-round beverage director Loic Avril (ex-Fat Duck and Dinner by Heston Blumenthal) stores a chunk of the 10,000-plus listed bottles. One by-the-glass list features 40 significant vintages of renowned wines, tapped via vacuum-sealed Coravin machine so they can also be sold in single glasses. At the top end of the scale is a $45,000 1945 Chateau d’Yquem Sauternes from Chris Lucas’s personal collection. That said, house pours start at about $13.

Beyond the wine cellar is a second, more casual restaurant – the Lillian Terrace – which has a more rustic and warm feel than Society. While Melbourne-based architects Russell & George fitted out Society in a moody palette of blacks and charcoals, Lillian is more timber, tanned leather and soft, tasselled lights. It’s still awfully smart, with a David Noonan jacquard tapestry taking pride of place. Outside, an L-shaped terrace looks out onto the rooftops of Collins Street.