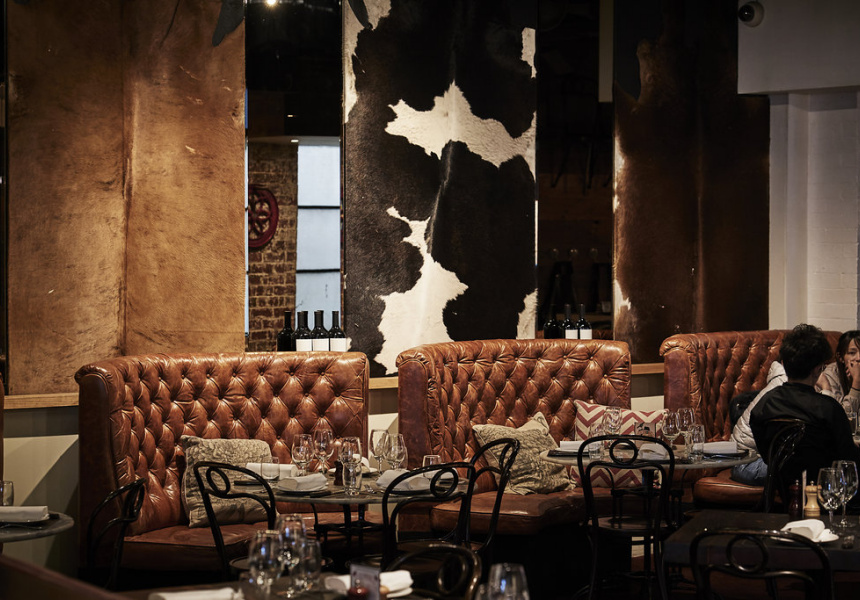 San Telmo is truly inspired by its namesake barrio in Buenos Aires – rustic, bohemian, brimming with antiques and one-off finds collected by brothers and co-owners Dave and Mickey Parker on their travels in and around Buenos Aires. You can count on each item having a story behind it too, such as the entrance doors, which were bought from a wrecking yard after being salvaged from a mansion in San Telmo. The other two owners, Jason and Renee McConnell, also co-own newer restaurants Palermo, Asado and Pastuso with the Parkers.

The menu revolves around a parrilla (pronounced "pa-ri-sha" in Argentina), a type of grill favoured for cooking meat in many South American countries. Argentinians have a particular affinity for chargrilled beef, which is often the centrepiece at birthday parties and other celebrations. The same is true at San Telmo, which favours pasture-raised beef from O'Connor, one of Australia's best producers of the stuff. There are usually five steaks on the menu, alongside chicken, lamb and fish.

But even with the unashamedly meaty menu, this is a place where vegetarians can muddle through a full meal. There's a number of creative sides incorporating Spanish and Italian influences, just like you'd find in Buenos Aires. Burnt carrots might come with hazelnuts and goats curd, for example. Provolone could be fried and dressed with oregano, chilli, pepper and lemon.

If you're just in for a drink after work, take a seat at the the 10-metre hardwood bar and snack on a few empanadas, ideally with a glass of malbec or another varietal selected from the extensive, 100 per cent Argentinian wine list. There's also a respectable roster of beers and cocktails.