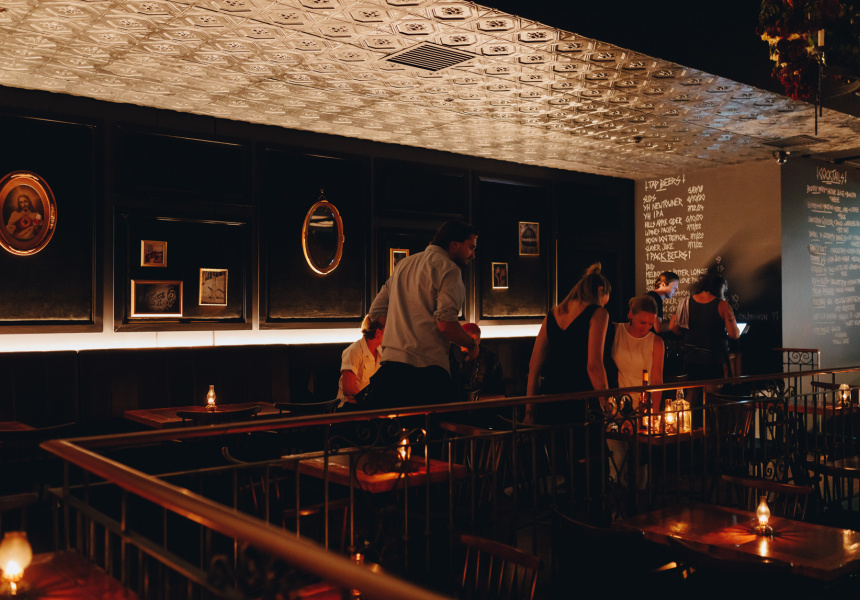 Sydney’s burger scene can be divided into two categories: before Mary’s and after Mary’s. When its first location opened in Newtown in 2013, the venue’s canny mash-up of loud music, natural wines and American-style cheeseburgers was a seismic shift for fast food in the city.

The Mary’s Group is a now a burger-driven empire, with spots in the Sydney CBD, a pizzeria, a bottle shop and even an old-school dinner-and-a-show diner. Mary’s Melbourne is the first Victorian outpost for Sydney’s burger barons.

To find the bar, head down a narrow alley off Franklin Street in the CBD. Look for the door with “Mary’s ❤’s Melbourne” scrawled on it, heralded only by a bare red lightbulb. Step inside, navigate a staircase and another door, and you’re in.

Inside, it’s immediately dimmer and louder than you expect. A playlist heavy on Queens of the Stone Age, Death from Above, Shame and Deftones sets the tone. Service is friendly and familiar.

The menu – the same as at the Newtown original – is written on the wall in the same aggressive angular handwriting as the front door. The burgers are the main event and come four ways: a cheeseburger, a fried-chicken burger, a mushroom version, and the signature Mary’s beef burger. There’s also fried chicken by the half, whole or double.

Plus, everything can be made vegan. That whole fried chicken? Say the magic word and you’ll get the cauliflower version.

The cocktail list is a bit of a rollercoaster ride. There’s a high-intensity Bloody Mary topped with a melted square of processed cheese; a textbook Margarita; a gin, pét-nat and watermelon number called the Unicorn Cooler; and a Malibu Daquiri.

Seek out the wine list by award-winning group wine director Caitlyn Rees, whose selections include “Outcasts” (a category for styles that don’t fit neatly anywhere else) and an “Oxi Hipster Section”. There’s a strong contingent of local producers, too.