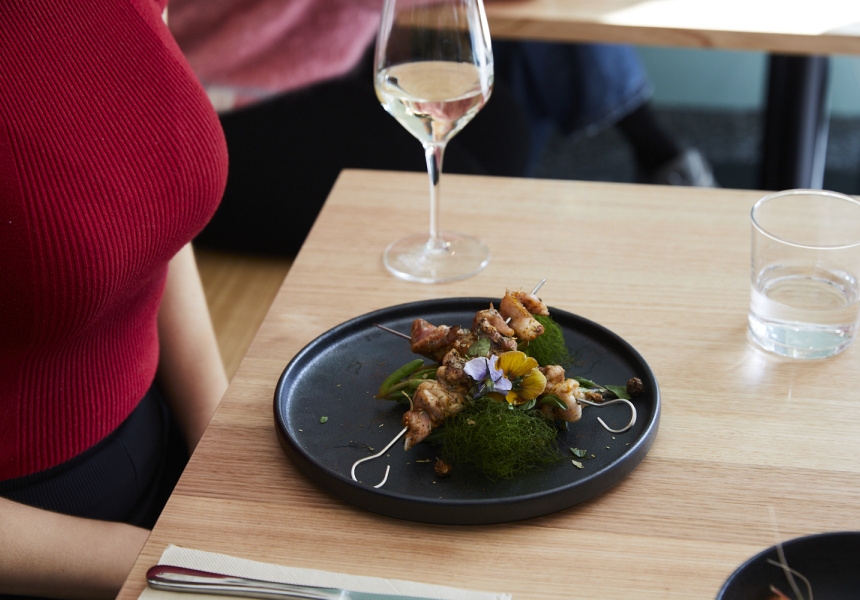 At the second venue from Mabu Mabu chef-owner Nornie Bero, you’re greeted by a pink neon sign that says “Big Esso”. It means “the biggest thank you” – to everyone who’s supported Mabu Mabu from its beginnings as a South Melbourne Market stall, through to its launch as a Yarraville cafe. The thank you also extends to this continent, for its abundance of native produce and ingredients.

Bero's mission is to make indigenous ingredients and cuisine more accessible – particularly that of Mer Island in the Torres Strait, where Bero grew up. She's doing it at Mabu Mabu, but Big Esso represents the next step – an expansion – of the plan. The all-day bar and kitchen is at Fed Square, beside the Koorie Heritage Trust and right across from Acmi, on Wurrundjeri land. Here, she’s drawing from the food of her childhood, with shared plates of local seafood.

Highlights include a bucket of chargrilled prawns with sea succulents and Bero’s own hot sauces; pipies with fresh tamarind, chilli and Neptune’s beard (a fine stringy seaweed); ginger-poached periwinkles (sea snails) with chilli aioli; and fried crocodile with saltbush, pepperberry and pickled karkalla (a sea succulent). There’s also namas, a coconut-cured kingfish that’s similar to ceviche, and a dish called zurra, a broth that's similar to a fish consomme.

The indigenous focus extends to the drinks menu, too. Her Yarraville cafe doesn’t serve alcohol, so this is the first venue where Bero gets to highlight local booze. The entire beer, wine and spirits list is Australian, except for a few conspicuous outliers. There are wines from Tarrawarra Estate and Giant Steps in Victoria; Unico Zelo, Bird in Hand and Alpha Box & Dice in South Australia; and Vasse Felix in Western Australia. Stomping Ground beer is on tap, supported by tinnies from Stone & Wood and Two Birds.

The welcoming diner has timber furnishings, woven accents and green bar tiles. There’s a mural to one side by Indigenous artist and activist Aretha Brown, and original art by Gunditjmara and Torres Strait Islander artist Lisa Waup has been printed onto some tables. A bamboo tiger shark sculpture from Moa Island also hangs from the ceiling. A small retail area offers products from Mabu Mabu’s Indigenous-owned partners, as well as house-made hot sauces, seasonings, spice mixes and teas to take home.