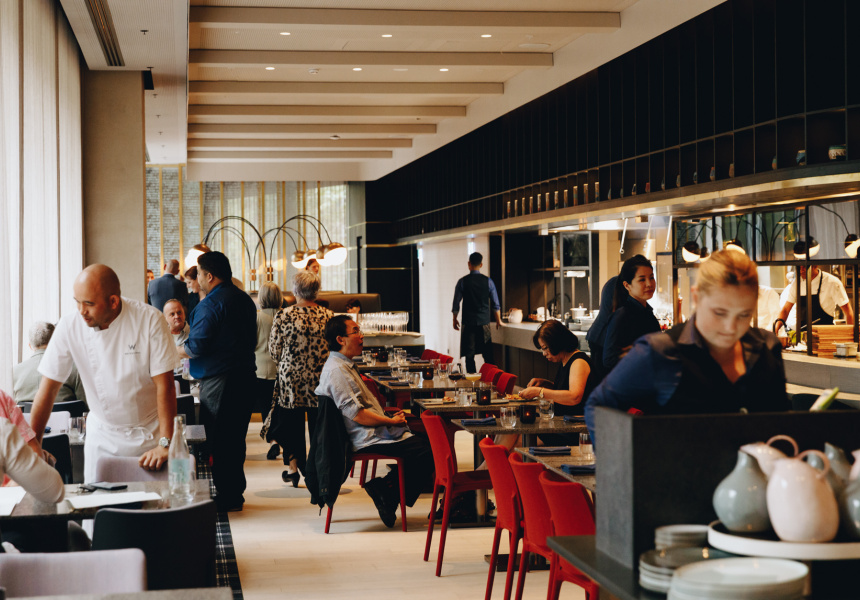 For Coda and Tonka’s Adam D’Sylva, jumping on board to helm the flagship restaurant at new luxury hotel W Melbourne on Flinders Lane was a “no-brainer”.

As creative culinary director of the recently opened 110-seater Lollo, he’s created a harmonious, globetrotting menu that he says pulls from his Italian-Indian heritage – working alongside the hotel’s executive chef Jihun Kim.

My eyes immediately dart to the lasagne – and then to the $52 price tag. “Lasagne ended up being a Covid staple so I wanted to elevate it somehow – make it even more luxurious,” says D’Sylva, who uses duck mince in place of the rudimentary pork or beef for the rich bolognaise-y layers. It’s baked to order, with a crisp crust and dollops of buffalo mozzarella. “We do it rotolo style [with rolled-up pasta sheets] so you can share it,” though I doubt you’ll stop at your allocated portion.

And while it might sound sacrilegious, D’Sylva’s pasta-less cacio e pepe is – surprisingly – a triumph. Wedges of crunchy, chargrilled cosberg lettuce sit beneath a silky cheese-and-pepper sauce. “I personally don’t like mayonnaise,” says D’Sylva, so consider this his Caesar salad alternative for the mayo-averse (croutons included).

The ultra-crunchy chicken cotoletta is made with corn-fed chook (from Hazeldene’s near Bendigo) instead of grain-fed because, he says, “You can burn the fuck out of it and it will still be juicy”. And there’s also yellow fin tuna tataki with pops of pomegranate and a good whack of horseradish; gooey buffalo mozzarella en croute (wrapped in pastry and baked until golden brown) that guarantees a dramatic cheese pull; and a fragrant, spicy red duck curry – balanced expertly – with snake beans and Thai basil.

Lollo’s drinks list – by the W’s food and beverage director Garth Welsh – confidently covers all the bases; the wine program is around 70 per cent Australian (and half Victorian), vermouth and aperitivi are well-represented, and there are dedicated sections for hard seltzers, saisons, and sour and wild-ferment beers.

Cocktail-wise, the Karen 3.0 is a spritzed-up blend of Aperol, absinthe, pampelle and champagne that Welsh says was inspired by “Karen From Brighton”, who caused a social-media stir during lockdown for her bored-of-Brighton proclamation. And the “big, bold and burly” all-Aussie Negroni is a swish-together of Never Never gin, Adelaide Hills Distillery’s bitter orange aperitif and Maidenii sweet vermouth, with riberries, quandong and aniseed myrtle.

But it’s the restaurant’s Mornington Peninsula water Welsh can’t stop raving about on our visit – and to our writer a few weeks later. Three Bays is said to take 2000 years to rise from the Palaeolithic Basement to the backyard of a Red Hill hobby farm. And even Zac Efron and Anna Kendrick are fans.

Lofty floor-to-ceiling windows give the restaurant a sense of airiness, and the dining room curves around a rambling open kitchen. Dramatic arched light fixtures hang over a series of comfy leather booths. Lollo sits in stark contrast to the W’s subterranean cocktail bar Curious; its walls and ceiling are blanketed in dark-timber beams, creating an intimate cocoon-like feel. It’s the perfect post-dinner-drink destination.