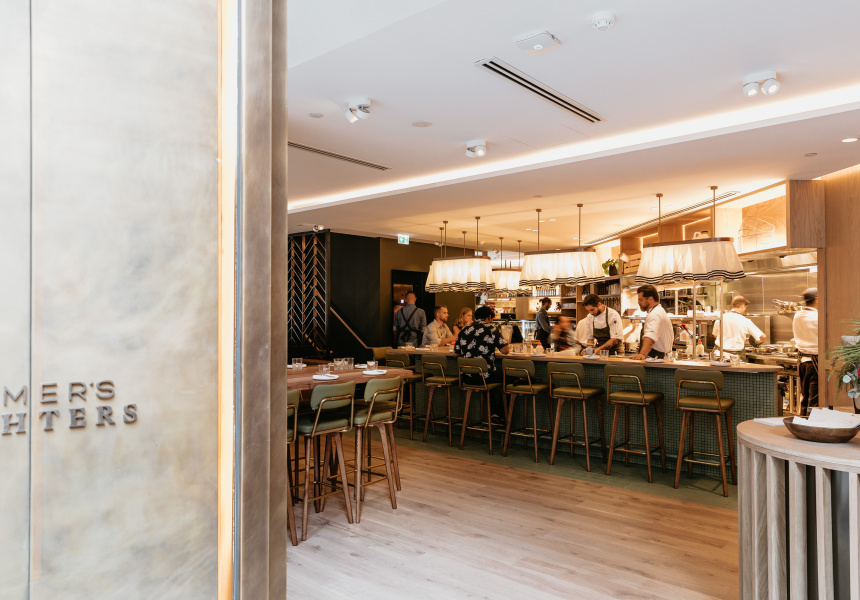 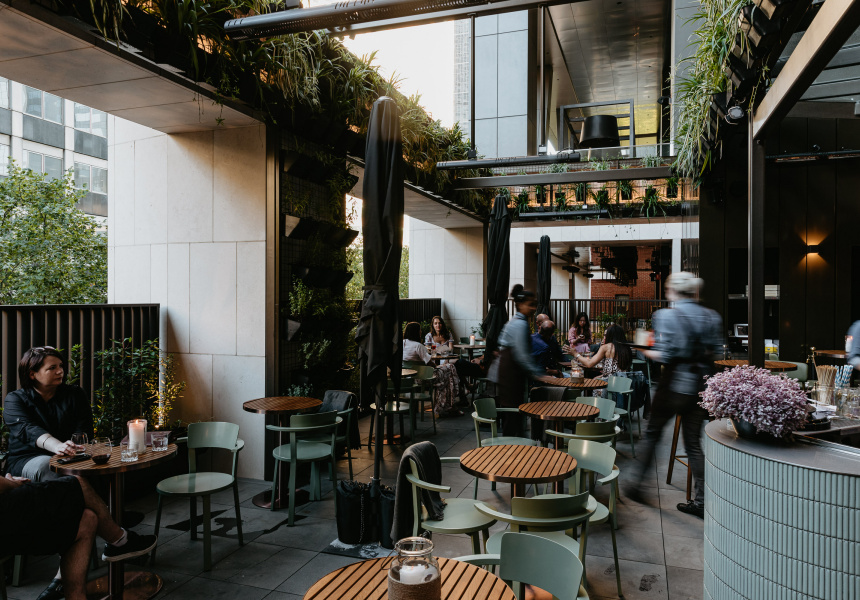 Farmer's Daughters – by celebrated Melbourne-based Peruvian chef Alejandro Saravia Pastuso – is a three-storey love letter to Gippsland and its produce. Saravia first became taken with the region back in 2016 – when he went on a produce tour. Saravia was amazed by the quality and diversity of the region's fare. It was this admiration that led to him being appointed an ambassador for the region. In 2021, he opened Farmer's Daughters – bringing a bit of Gippsland to the CBD.

Each level’s fit-out draws inspiration from Gippsland’s natural beauty. Wood has been repurposed from local timberyards; the colour palette of greens, greys and browns is based on Gippy’s gumtrees; and the restaurant’s “campfire kitchen” came about after Saravia watched farmers cook over naked flames. There’s a series of cooktops and ovens that capture and distribute heat to maximise flame-to-food contact.

On the ground floor is the deli. It’s a casual, handsome space with à la carte dining, gumtree-green bar seats around the open kitchen, and a pantry (stocked with Gippsland wines from Holly’s Garden and Lightfoot & Sons, and produce from Berrys Creek Gourmet Cheese and Tarago Olives) tucked in the corner. The menu includes house-made beef-cheek pastrami (made from Bass Strait beef) stuffed in a roll; slow-roasted Cherry Tree Organics lamb shoulder; and a trifle for dessert.

The restaurant is one level up. Head chef David Boyle (ex-Lake House, Pastuso and Oter) presides over two set menus: either four courses or seven. You’ll start with thickly sliced soda bread. Then there might be fire-roasted heirloom tomatoes around a nucleus of tomato paste (made from offcuts), with sprigs of salty seagrass picked from Snowy River Station. Seafood will likely follow – perhaps smoky baked Baw Baw alpine trout with mountain-pepper cream and trout caviar, or the Corner Inlet catch of the day, baked until the skin crisps up and served with whatever’s seasonal (currently it’s sweetcorn sauce and green beans).

On the third floor is a triangular rooftop bar that’s meant to emulate a greenhouse. There’s a sense of vertigo when you look up: skyscrapers flank the oasis, which is filled with mountain pepper trees and has a vertical garden where native herbs (used in dishes and cocktails) grow. Speaking of cocktails: there’s the “very dirty” Dirtroad Martini, the slightly-smoky Campfire Old Fashioned and a vibrant orange spicy Margarita. The back bar has an almost-entirely Australian line-up of spirits, including a house vermouth (produced in partnership with Maidenii) made with Gippsland botanicals. And for the beer drinkers, there’s a collab with Stomping Ground: the Stringer’s Creek pilsner.