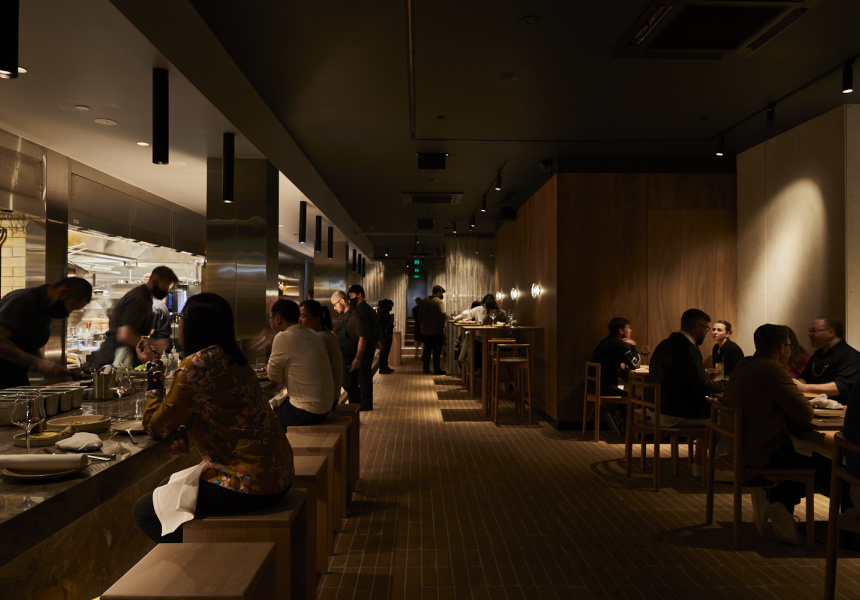 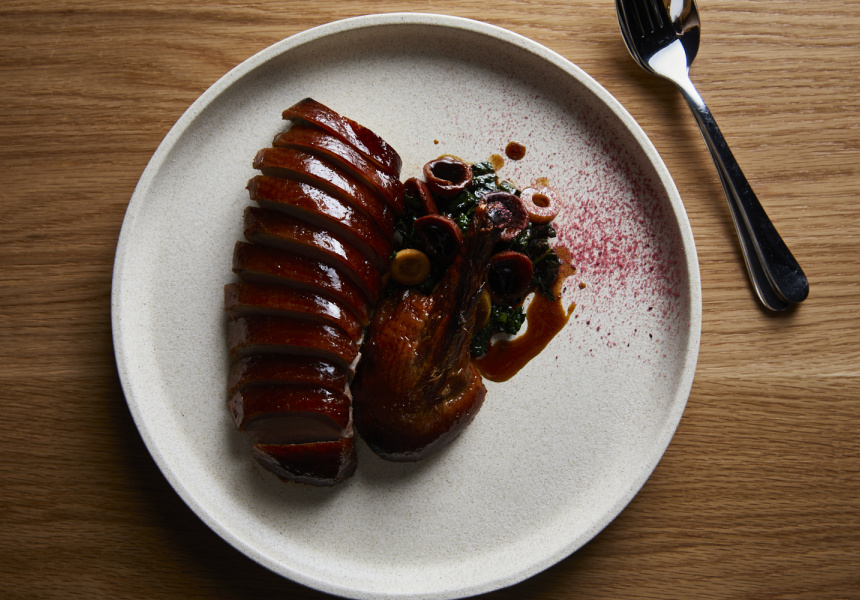 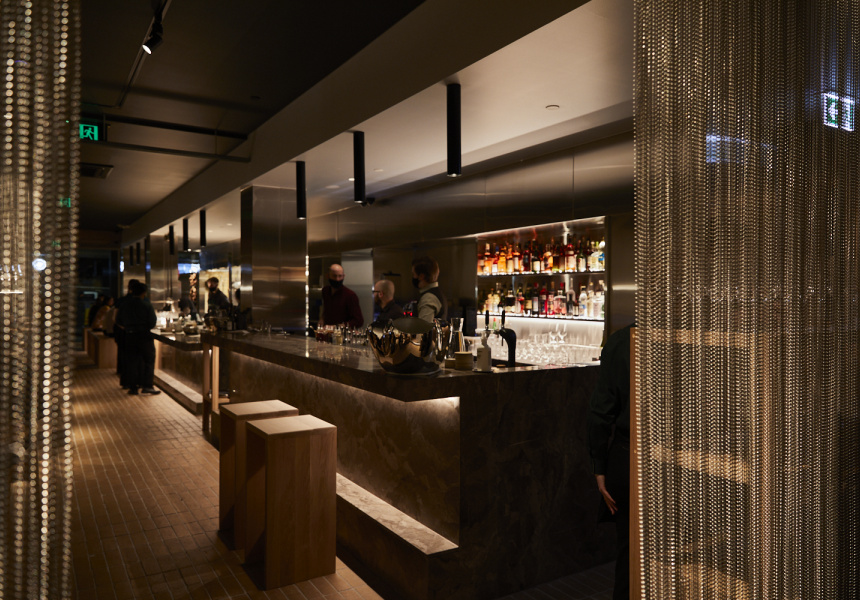 Walking into Aru – by Sunda chef Khanh Nguyen and Adi Halim (owner of Sunda and The Hotel Windsor) – the first thing you'll notice is the blazing woodfire hearth. The second is the sheer number of chefs and staff gracefully criss-crossing the room.

The busy kitchen occupies one side of the narrow Little Collins Street restaurant; on the other, diners perch on cosy banquettes and curved timber chairs. There really is nowhere for the chefs to hide – all eyes are on the 16-metre-long open kitchen. Kerstin Thompson Architects and Figurehead are behind the fit-out (they also did Sunda’s). Chainmail curtains and small elevated terraces break up the narrow but deep dining area, cast in shadow by moody lighting. The warm and earthy colour palette – which features spotted gum and terracotta bricks – is inspired by the restaurant’s focus on fire.

The hearth, a dedicated coolroom for dry-aging duck and curing charcuterie, and a fermentation room (filled with jars of sambals and sauces) were all musts for Nguyen, who wants to cleverly combine familiar Southeast-Asian flavours, native Australian ingredients and ancient techniques. It’s a formula he’s nailed – perhaps better than any other chef in Melbourne – at Sunda, with a fine-dining edge. That’s present here, too, although Aru is distinctly different from his upscale Punch Lane restaurant. It almost feels as if Nguyen is having more fun.

Sunda is known for its small, dainty plates. But they’ve been traded here for generously sized share plates, inspired by the kinds of large family dinners Nguyen would have in Vietnam. It's a playful menu that's designed to be mixed and matched across the table.

Make sure to start with the bread – sourdough with "forbidden" (black) rice, glazed with soy sauce and palm sugar. Then, follow it up with something spectacular from the charcuterie section: pâté en croûte with flavours of banh mi, including an umami-packed jelly of Maggi seasoning. There’s also a Peking duck-inspired duck ham, cured pork neck with smoked egg cream, and beef brisket.

The rest of the menu is stacked with hit after hit: a Bunnings-esque duck-sausage snag; dry-aged duck with smoky cavolo nero; hasselback potatoes atop “green” sauce and Laughing Cow cheese; mi goreng-like egg noodles with black garlic and a Hong Kong seasoning called typhoon shelter; and broken rice with duck fat, fermented duck sausage and egg yolk, all served in a clay pot.

Cocktails, by group bar manager Darren Leaney (ex-Capitano) take their cues from the menu. There’s a milk punch with flavours of banh chuoi (Vietnamese banana cake); the Umami Martini with Four Pillars Olive Leaf gin and a bush tomato in place of an olive; and a cocktail that uses calamansi, a Filipino lime. Beverage manager Michael Kovatseff-Burton has curated an almost-400-strong wine list that stands up to the food’s robust flavours, including local Avani, Main Ridge, Jamsheed and Jayden Ong wines; classics from France and Italy; Chilean skin-contact drops; and two dozen by-the-glass options.