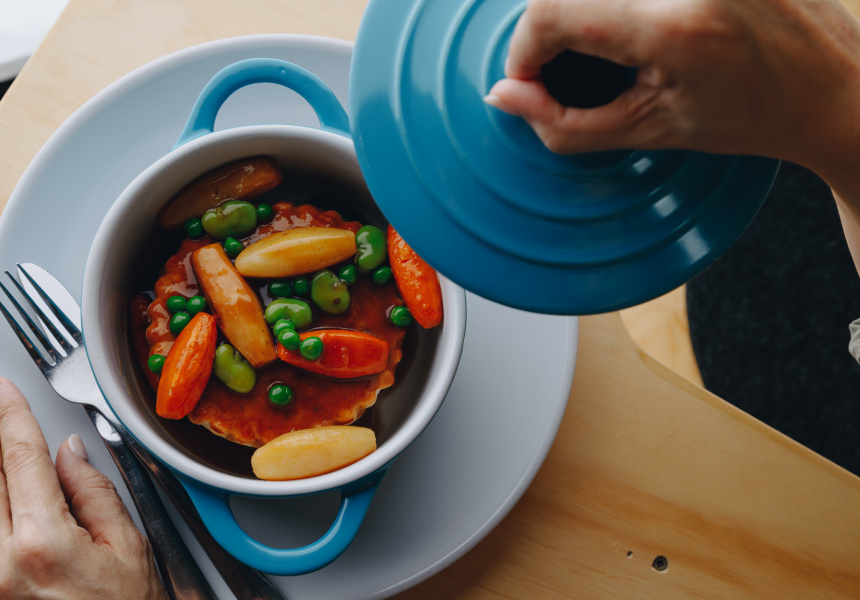 Its bright and quirky interior is a nod to Alice in Wonderland. A science-lab-like pie museum in the front window displays individual pies encased in tubular glass domes. The glow from a neon “Pielicious” sign bounces off the room’s many glass surfaces. By the window, wooden stadium seating and inbuilt tables allow for quick pit stops.

Chef Raymond Capaldi’s pies won’t collapse and crumble into your hands when you take a bite. Each one has a light shortcrust pastry on the bottom and a crispy rough puff pastry on top. The pastry is made using organic flour, and vegetable lard instead of butter, so the pie cases are vegan.

A confit duck pie with parsnip, honey and coffee jus can be found alongside the pie-au-feu, a take on the traditional French beef stew pot-au-feu, with chunky beef and a rotating mix of greens. There’s also a mac’n’cheese pie, a vegetarian cauliflower and cheese version, and a vegan pie made with vegetable mince, nutmeg, pepper and cinnamon. A traditional apple pie is made from raw and cooked apple and peppered with raisins.

The menu includes pancake pies (pancake batter cooked in pie moulds) filled with banana and custard, and “pieschetta” (bread made from pie crusts, topped with zaatar, tomatoes and cracked pepper). On tables there’s a house-made spicy ketchup and a thick, smooth caramelised-onion sauce.

Cakes and doughnuts are available, too. And the deli cabinet has charcuterie, terrines, pickled vegetables, salads and take-home meals.