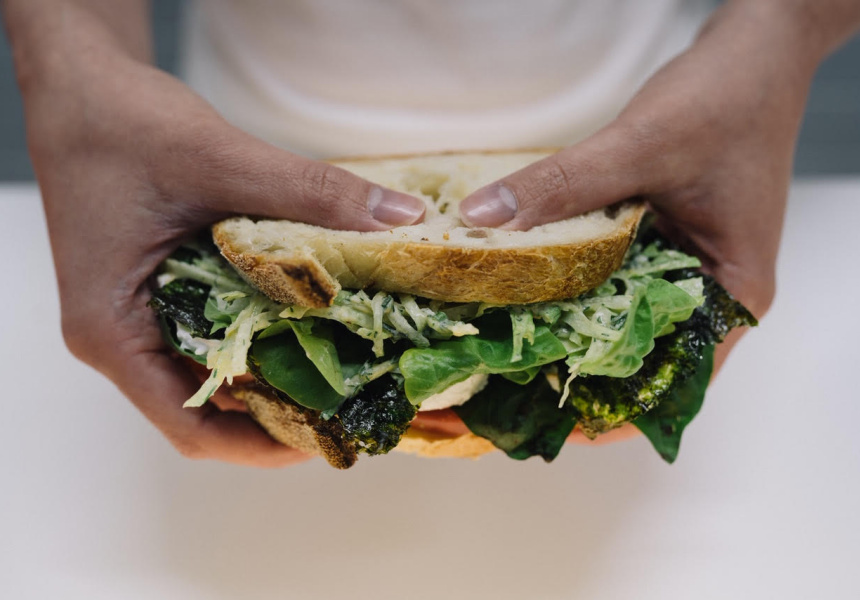 Nico’s Sandwich Deli was supposed to open in the CBD in March 2020. But we all know what happened next. It was open for one day before everything closed.

Later on in that rollercoaster year for Melbourne, Nico’s resurfaced in Fitzroy for a pop-up just off Brunswick Street. But the original CBD location, whose lease owners Marcus DeSantis, Leo Thompson and Tom Peasnell (Dexter, Takeaway Pizza, Kenny Lover, Dom’s) were still tied to, laid dormant. But now, the CBD has come out of its Covid-funk, and Nico’s has headed home – although the Fitzroy pop-up is sticking around until at least 2022.

The menu is largely the same as the Fitzroy pop-up, with a few additions to round things out. Headlining the menu is the Nico’s Original: a tomato, basil, buffalo mozzarella and crisp cos lettuce sourdough sandwich that’s been jazzed up with a creamy sauce laced with herbs, Japanese shio koji (an umami-rich seasoning), nori and kombu. The schnitzel sanga is another standout, and a bestseller from the Fitzroy days.

Other options include a brisket-and-pork meatball sub with bone marrow and a hearty, smoked cannellini bean sugo (only on Fridays); a Cubano with pork belly (smoked at Dexter), leg ham, swiss cheese, dill pickles and mustard. A prawn cocktail-inspired sandwich is a CBD-exclusive that combines prawns, smoked salmon, dill caper vinaigrette and Thousand Island dressing.

In addition to the made-to-order sandwich range, there are grab-and-go baguettes; a daily winter-friendly soup (with a cheese toastie for dipping); pastries from Northcote Bakeshop; and a kimchi-loaded grilled cheese. In the mornings, there's a brekkie roll filled with fried mortadella, avocado, smoked pork belly and a fried egg. That roll's available from opening time, whereas the other sangas kick in later on it the morning.

There’s also batch-brew and espresso coffee by Seven Seeds and a great roster of shakes and juices.

The shop is located on Healeys lane, a couple of blocks south of Flagstaff Gardens. Look for the old-school cobalt-blue signage. There’s not a lot of wriggle room inside the tiny, seven-square-metre white-tiled space. But it’s not for dining in. Good thing we’re all a lot more comfortable with takeaway these days.