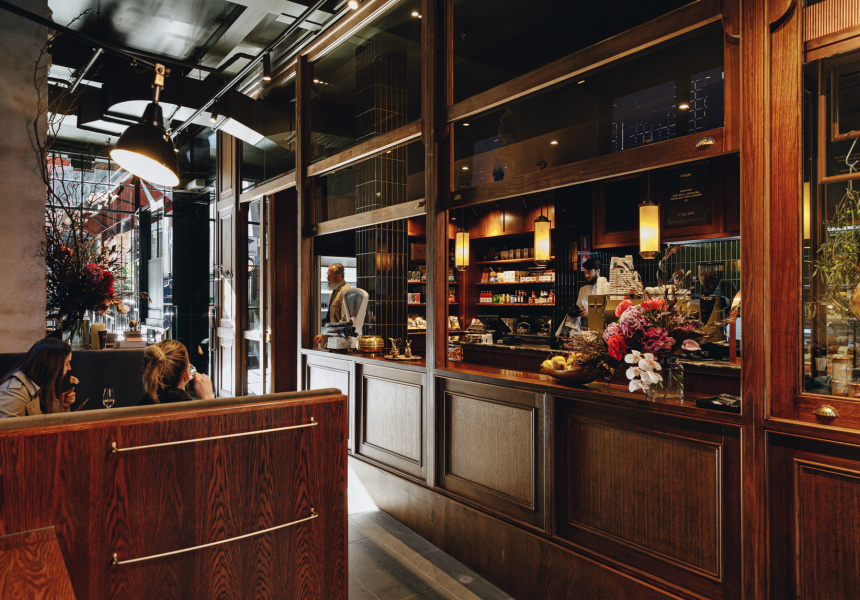 The corner store and eatery is fitted with rich green subway tiles, American oak, copper fixtures and opulent floral arrangements, and has the same timeless elegance as the bistro. It’s mainly a takeaway venue, but there are four booths if you want to settle in, or you can nab one of the standing spots.

Le Shoppe’s menu is centred on a rotating selection of salads and sandwiches to eat in or takeaway. For those after grab-and-go, there are sandwiches with curried egg, smoked salmon and cucumber, and truffles and chicken, as well as salads of tuna niçoise and quinoa and broccoli. You’ll also find baguettes (including cured pork, pickles and cheese, and brie and black lettuce) and three salads of the day (think classic potato; poached chicken with nuts and sultanas; and cauliflower, olive and romesco).

In homage to the airport's Pickett’s Deli and Rotisserie, Le Shoppe serves one of the restaurant’s signature dishes: Mr P’s egg and bacon roll. There’s also a roast roll that alternates daily.

On the menu you’ll also find a couple of French-style light bites such as quiche Lorraine and crepes suzette, plus pastries by Ned’s and baked goods made in-house. Look to the window filled with hanging cured meats to see the charcuterie, which is cut to order.