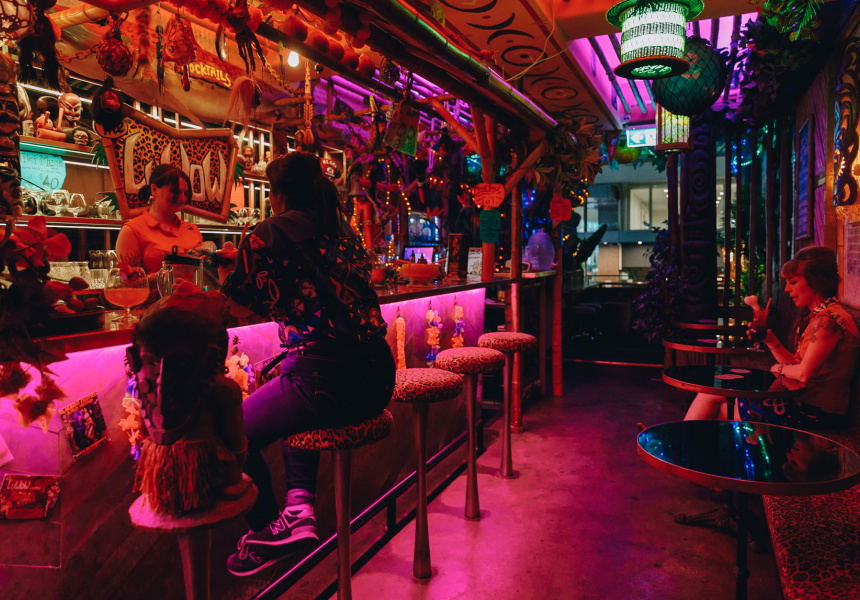 The Luwow is a real destination cocktail bar. Nothing can replicate ascending those stairs and entering the bar’s world of cultural mish-mash, garish colours and truly excellent rum-based cocktails. But considering we don’t have a concrete date for the lifting of this lockdown, takeaway will have to do. (Again.)

Every Thursday, Friday and Saturday from 4pm to 8pm, the Luwow is opening up for takeaway cocktails and tacos. The streamlined take-home menu features signatures and classics such as The Pain Killer ($20) and the Mai Tai ($15). If you want to make your walk home extra interesting, go for the Easter Island Iced Tea: a potent – but very tasty – concoction that makes its Long Island counterpart seem feeble.

There are also carnitas tacos and little quesadillas to take away, too. There’s no pre-ordering or delivery for this one. Just show up and order. Strict Covid-safety rules apply, though, so once you’ve acquired your cocktails, get the tiki party started at home.

When it opened on Johnston Street in Fitzroy in 2011, the LuWow was a little bit of a bar and a little bit of a nightclub. But the original LuWow had to call it a day at the end of the day when its lease expired.

The new LuWow, which opened in the CBD in 2019, is in the space formerly occupied (fittingly) by Hawaiian-themed restaurant Hana. It’s owned by “Skipper” Josh Collins and his wife Barbara.

Tikis are everywhere you look – Skipper Josh built most of them himself. Rattan and bamboo ceilings, booths made from repurposed car upholstery, fishing nets, fake plants and flashes of leopard print adorn the 50-person room, which is aglow in green and blue lights. It’s all set to a soundtrack that spans everything from Elvis Presley’s Do the Clam to modern surf rock such as Zombi Hut by the Tiki Tones.

Any tiki bar worth its cocktail salt should know how to make a good Zombie, and the LuWow’s is a doozy. It uses three kinds of rum shaken with grapefruit and pomegranate juice. A very boozy falernum (a sweet alcoholic cordial made from lime zest, spices and almonds) is added in for good measure. It’s a highly alcoholic, dangerously easy-to-drink cocktail. Proceed with caution.

Other cocktails on the menu include a classic Mai Tai; the Pain Killer, a pineapple and orange-juice punch combining dark rum and coconut; and instead of a Long Island Iced Tea there’s an Easter Island Iced Tea, which adds coconut tequila and blue curacao to the classic five-spirit cocktail.

Head chef Jun Lee also worked at Hana and, as with all things tiki, his menu has a lot of cultural influences. There’s Jamaican fried chicken and tempura-like crispy prawns to snack on while downing your Voodoo Volcano or Gruesome Grog.