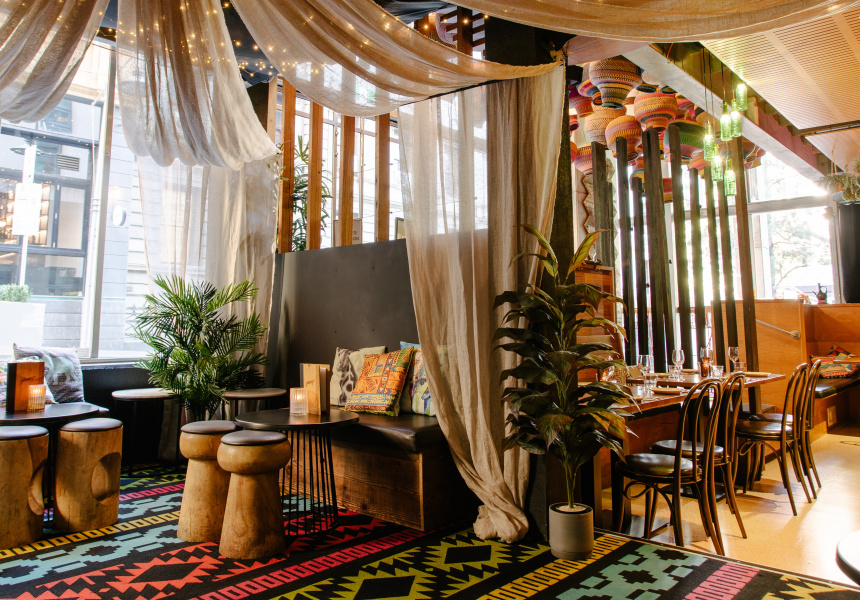 Dean and Jeanelle Mariani have a thing for Africa. After trekking there for four months, they came home and opened polepole (“pol-eh-pol-eh”), their bar and restaurant named after the Swahili phrase for “take it easy”. Glamp Cocktail Bar, located directly upstairs, is more or less the sequel.

A formidable rhino nicknamed Heavyweight guards the door. He’s one of 100 statues daubed by artists and sold off at Taronga Zoo to raise money for rhino conservation. The room has technicolour carpets, suspended hurricane lamps, a rough wooden bar and two large tents at either end.

Spirits aren’t big in Africa – which is a problem for an African-themed cocktail bar. Resident bartender Ben Hehir has a novel solution: invisible fizzy pops, which riff on the popularity of soft drinks in Africa. Fruit juices are clarified and mixed with booze to create a fruity, carbonated yet perfectly clear drink. There’s a Fanta-like citrus version, plus a cola-driven one.

Other cocktails include the Maasai Warrior and Dr Livingstone, I Presume? which are heavy on equatorial fruits. Likewise the sipping list leans most heavily on rum and tequila, spirits that best evoke the tropics. As at polepole there’s a range of African beers, the profits of which are used to fund varying donations to YGAP and Women for Women in Africa. Five per cent ($1.10) of every Big 5 cocktail goes to YGAP, too.