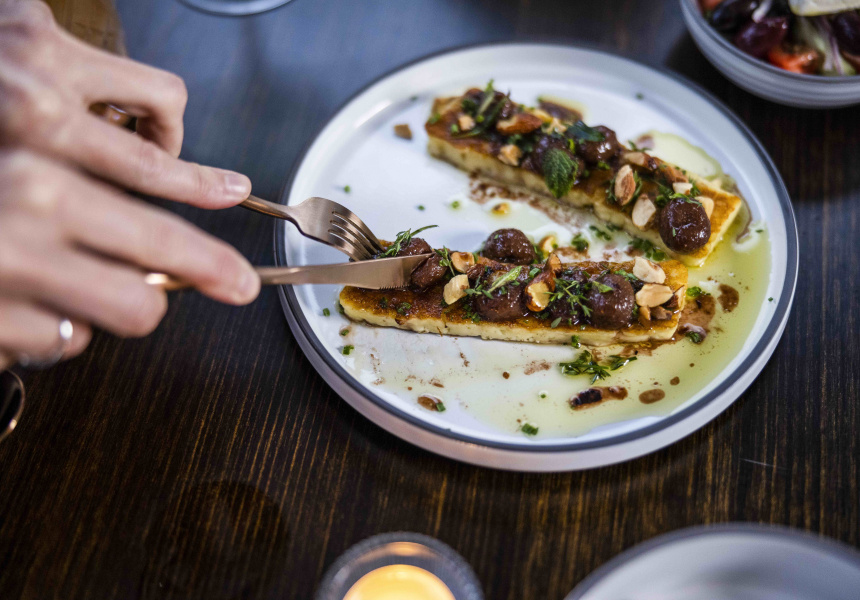 Fable, on the 13th level of the CBD’s Greek Community Building, is one of the city’s tallest rooftop bars. Located at the top end of the CBD, the venue has views of the Eureka Skydeck, the Arts Center and even the Bolte Bridge.

Initially, owner Gehan Rajapakse only planned to do a small cosmetic lift of the semi-covered eatery. But after he got started, he ended up embarking on a complete rebuild and opening the entire roof up, prior to opening in November 2021. Now sheltered by heaters and a retractable awning, the venue is designed for year-round trade.

Fable plays on the building’s heritage through its Mediterranean-leaning menu, developed by former Press Club chef Alex Xinis. Dishes include calamari with ouzo mayonnaise, a lentil and eggplant moussaka, and lamb shoulder with horiatiki (Greek salad) and tzatziki. Over half the menu is gluten-free and a large portion – including the cheese platters – can be modified for vegans.

The drinks list, designed by Alessandro Nardini (Nick and Nora’s) follows suit. Expect cocktails like Hannibal’s Dream, containing bourbon, pine and aquafaba (a vegan eggwhite substitute, the starchy liquid left over after chickpeas are cooked in water) or Ambrosia, made with beeswax-aged whisky, smoked honey and cocoa.