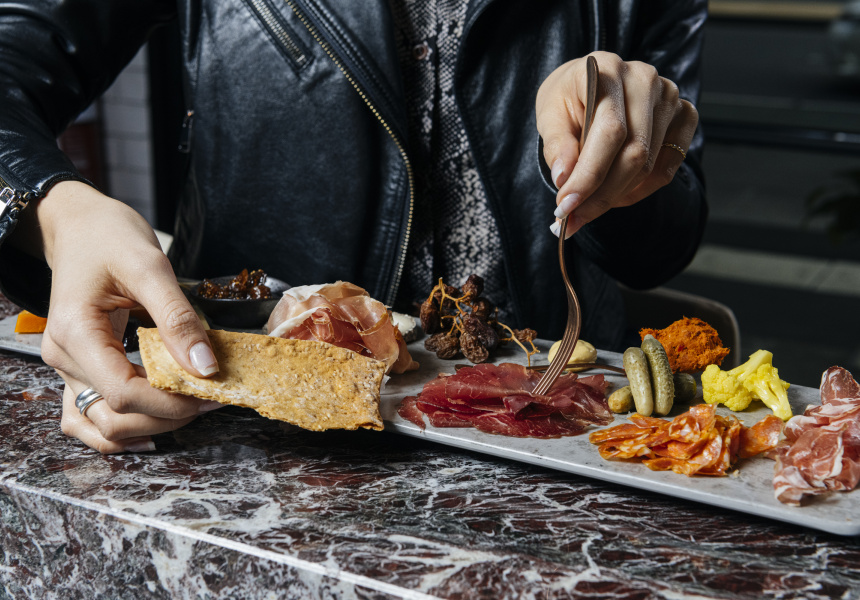 Lord Lygon feels a world away from other Zagame’s venues. The hospitality company is known for hotels and sports bars, and joints with TABs, indoor playgrounds and mass-produced lager. But here you’ll get natural wine, local beer, sliced-to-order charcuterie and a focus on sustainability.

The light and airy wine bar is attached to the group's hotel, Zagame’s House on the corner of Lygon and Queensberry streets. You’ll be greeted by staff in pink shirts. Cream-coloured high-backed stools line the long bar, which is made from Rosso Levanto Italian marble; it’s a mixture of deep pinks, reds and maroon that creates an alien landscape under your wine glass. The rest of the fit-out, by interior design firm Lukas Partners (MPD Steak Kitchen), leans local. Dark wooden tables and benches are from Castlemaine woodworker Hugh Makin. Stools are from Grazia and Co, and bespoke plates are by family-owned ceramics company Robert Gordon.

Like the fit-out, the drinks list prioritises Victorian producers with a few international touches. There are more than 280 wines by the bottle (for takeaway too) and a rotating selection by the glass. Glass prices hover around $15, but reach up to $30-plus for some pours, such as a Burn Cottage pinot noir from New Zealand.

On the beer front, there are 10 brews offered, including local favourites from Hop Nation and Mornington Peninsula Brewery, and Mick Fanning’s Balter Brewing Co from the Gold Coast. Cocktails are pre-batched and from The Everleigh, and there are canned Espresso Martinis too.