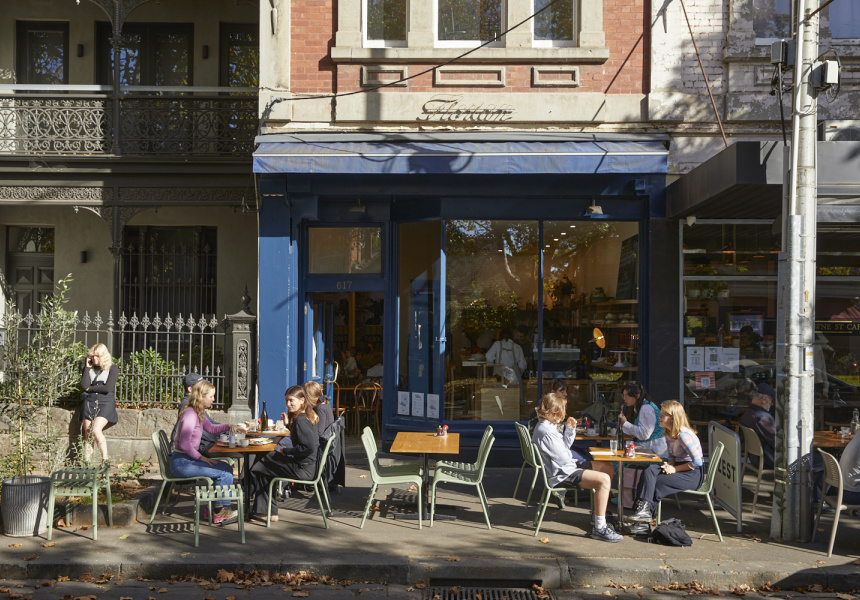 Florian is in the site that once housed Rathdowne Street Food Store, which was a bit of an institution. More recently it was cafe Small Victories, before Dom Gattermayr and Rose Richards took over in January 2021.

The fit-out complements that which came before. Glossy burgundy tiles line one wall, its built-in wooden shelves stacked with cookbooks and jars of house-made pickles. Rathdowne Street Food Store’s original landing, dubbed “the balcony” by former customers, is also still in place.

Florian’s pared-back, produce-driven menu adds to the timelessness. It’s got that relaxed, unpretentious cafe feel reminiscent of the pre-Instagram era. And that’s sort of what the owners are going for: food that’s made to be eaten, not photographed.

One of the standout dishes is the Farmer’s Breakfast, a plate of cured meats, cheese, boiled eggs, house-made pickles, rye bread and yoghurt with fruit compote. The meat for the dish comes from Donati's down the road, the produce is from Northside Fruit & Veg and the bread comes courtesy of Gattermayr's family bakery, Austro, which specialises in Austrian-style bread and baked goods (they make an appearance in nearly every dish on Florian’s menu).

Florian also serves coffee from Allpress in Collingwood, tea from Assembly in Carlton and soda from Strangelove in Carlton North.

The blackboard menu changes daily. There are a handful of rotating sandwiches and salads that shift according to the seasons; the rest of the menu changes every couple of weeks. Regulars will be rewarded with an ever-changing selection of lunch specials, such as crumbed sardines with heirloom tomatoes, or calamari salad with white beans, fennel and grapefruit.

If you’re after something sweeter, go for the whipped yoghurt topped with market fruit, puffed grains and nuts, or house preserves and butter served with a baguette, croissant or fruit toast. The gravlax dish – cured Tasmanian salmon, whipped ricotta, a soft-boiled egg, tarragon, radish and rye bread – has been a bestseller since Florian opened. The Eggs Florian, a take on eggs Florentine, has also been a hit. It’s served on a base of Austro rye and topped with soft-boiled eggs, kale, Comté and creamy bearnaise sauce.

House-made pickles and jams, plus a small selection of spices and seasonings, are also available to take home.