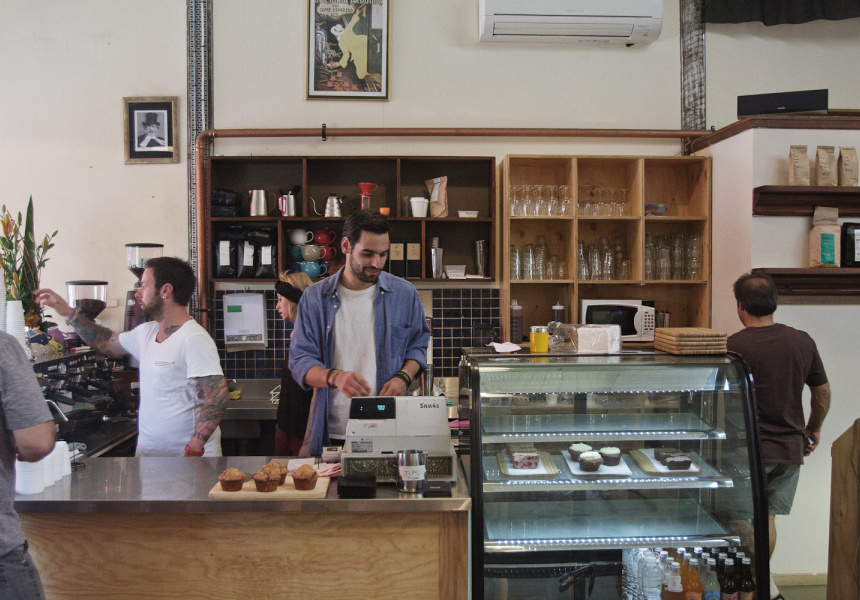 There is a jovial, familiar atmosphere about Two Short Men. The cafe, set up in Joe Green’s former location, exudes a relaxed and sunny disposition. Owner Marco Garbellotto and his son Aaron seem quite at home, as if they have been in the space for years.

The father/son duo have been working together for 12 years now, two of which were happily spent at Hawthorn’s Liar Liar, where they learned the tricks of the hospitality trade. Having started out in carpentry and building before opening up a newsagency together, the Garbellotto men were keen for yet another change when they transitioned into the cafe industry two years ago.

Two Short Men has also given the lads the freedom to create their very own coffee blend, which they roast and sell on site. The lovingly crafted blend sports the cafe’s namesake and uses 60 per cent Guatemalan and 40 per cent Costa Rican beans.

Coffee aside, all the classics are available in the way of drinks. Smoothies, milkshakes and freshly squeezed juices abound, and such variety fares well with the cafe’s strong breakfast focus.

The all-day breakfast menu is certainly extensive and has everything from homemade bircher muesli and Eggs Atlantic to house beans and assorted ciabatta toasties. Scrumptious sweet options are also on offer such as just-baked apple, cinnamon and walnut muffins or ricotta hotcakes served with macadamia cream, mixed berry compote and maple syrup. There are also lunch specials rotated every few days featuring fresh, simple staples.

The space, like the Garbellottos, has a diverse background and was originally an auto repair shop when it opened in 1890. With its cream-coloured brick walls, high ceiling and timber furniture, the cafe has kept its look charmingly old-school, and is sure to keep the local crowds coming back time and time again.