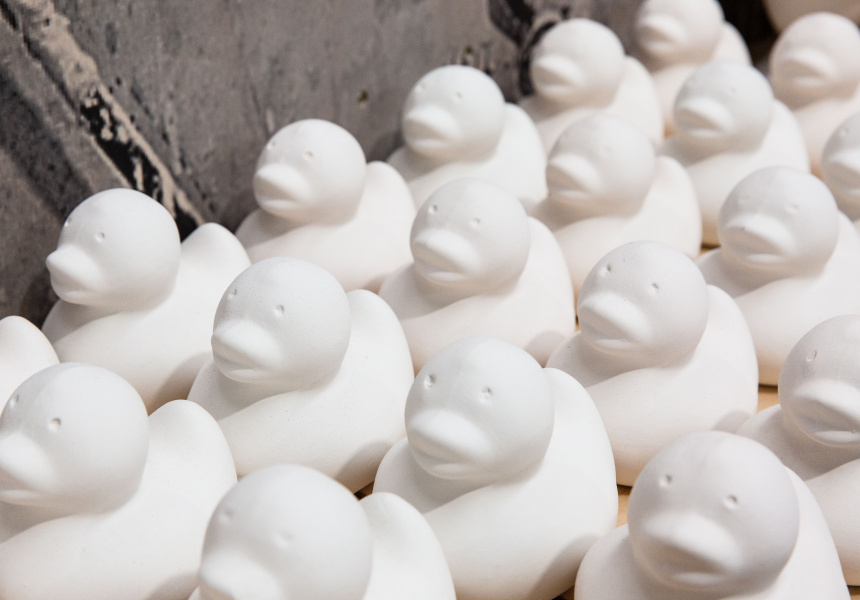 Robert Gordon Pottery has been a fixture of the restaurant industry since 1945, making stoneware for some of Australia’s finest restaurants, including Vue de Monde, Longrain Sydney and Grossi Florentino.

After more than half a century of supporting other venues, the Gordons launched a restaurant of their own in October 2018. Robert Gordon Kitchen sits within the family’s pottery factory, which churns out around 300,000 pots a year. It’s an industrial space, high-ceilinged and open, but the 60-seat dining room is transformed by moody lighting, locally made furniture, timber panelling encasing a part-open kitchen, and pile upon pile of ceramics in soft greens and ivory.

The menu involves hearty British fare sprinkled with influences from Melbourne and the wider Asia-Pacific region, such as hot chips with malt-vinegar mayo; cumin fried rice with curry-roasted cod; pear brûlée Bircher muesli with maple yoghurt; house-made baked beans; chilli scrambled eggs with Sriracha and sesame; and the Proper Bacon Sandwich, which is crisp smoked bacon and HP sauce on sourdough that has been heartily slathered in salted butter.

To drink, there are raspberry kombucha spiders, chocolate thickshakes and pots of English Breakfast tea.

There are also workshops where you can paint your own pottery, and there’s a decorate-your-own cupcake menu option for kids and kid-like adults.