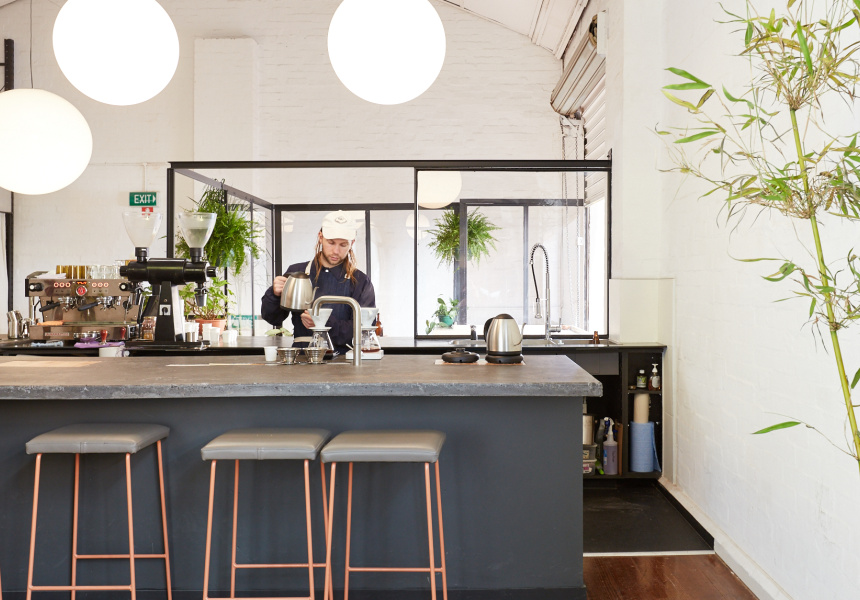 Assembly’s tea collection was getting too big to fit in its little Carlton outlet. So owners Chrissie Trabucco and Ollie Mackay found themselves a Collingwood warehouse, and made it into a second outlet for the exacting brewing business.

The Robert Street space is an open room dressed with ply and oak, soft-pink highlights and the occasional houseplant. With a little help from architecture student Sacha Hickinbotham, Trabucco and Mackay designed and built the cafe themselves, even moulding the enormous black cement benchtops in the centre of the space.

Along with serving the same eclectic selection of coffee as Assembly Carlton – Reuben Hills and Mecca from Sydney, or Barrio roasters in Canberra – and pastries from Matt Forbes and Bakewell, there’s also a growing range of specialty tea. Trabucco and Mackay consciously expand their offering, meeting with growers, distributors and exporters from Taiwan, Japan and China.

Assembly roasts its own green beans through the roastery collective Bureaux. It still sells other people’s coffee, but wanted to get acquainted with how it’s done. Assembly has also gone where no other third-wave specialty coffee store has gone before – caramel lattes. It makes its own dulce de leche for them.