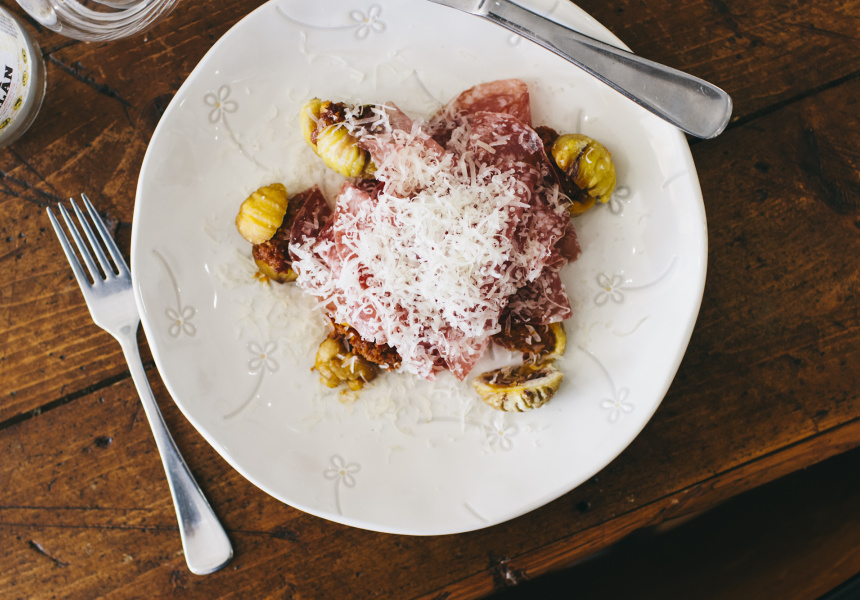 Rocco Esposito and Lisa Pidutti opened cafe and produce store PROJECT Forty Nine in 2015. Eposito owned Wardens Food and Wine down the road for a little more than five years, before taking the role of the wine director at Vue de Monde in Melbourne.

During this time he also started making his first chardonnay, sourcing small batches of grapes from neighbouring growers.

The cafe is the next stage. Food here is seasonal and packed into the impressive deli cabinet. Cured Harrietville trout might be matched with candied pears, gremolata and a drizzle of local olive oil. Organic chestnuts from Stanley farmer David McIntyre could be boiled, baked with Salumi Australia’s spicy spreadable salami, then topped with shavings of more salami and pecorino.

To drink, there’s coffee, Italian sodas and a selection of wines, including PROJECT Forty Nine’s own chardonnay.

The retail shelves are stocked with Greenvale biodynamic ham, local and imported cheeses, Phillippa’s biscotti and raw chocolate from Liefje and Pana Chocolate. There are also a few lifestyle goods, such as Frank Green reusable coffee cups and Uashmama washable paper bags from Tuscany.