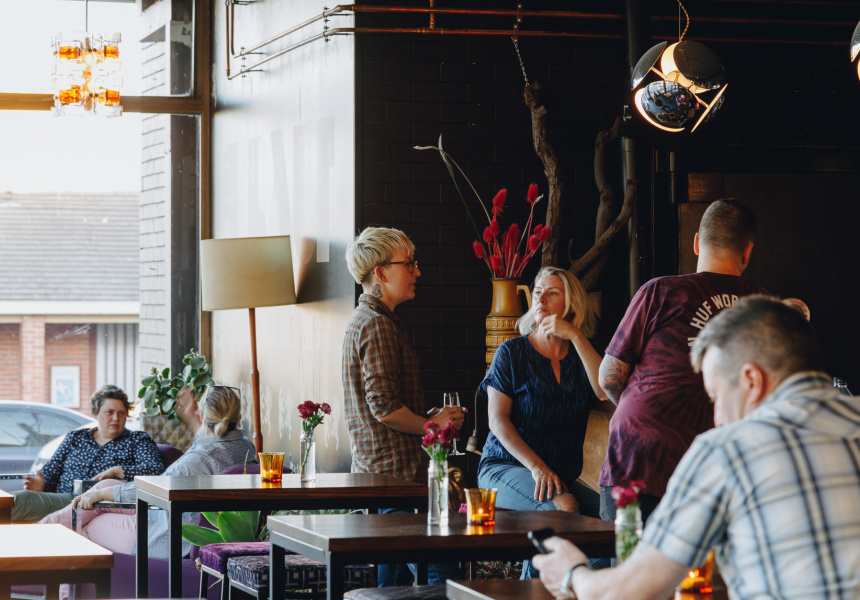 On entry to The Kraut Bar, before you head up the stairs to the bar, a mural of krautrock (a genre of experimental rock that developed in Germany in the ’60s) band names is painted in gold and black. There are cat portraits along the stairs, featuring owner Jandra Cox’s pet dressed in medieval finery. Shiny retro-lampshades hang above the bar, and the purple pool table – which is free all night on Fridays – matches the velvet-upholstered chairs by the entrance. There’s an Art Deco-inspired wooden bar, and a jukebox flips silently, waiting for its moment.

Cox had a hand in launching Kooinda Brewery and Prosciutto Bros, a bar in Eltham. Kraut has a grungy ’80s vibe with a fair whack of black paint and shiny surfaces.

There are eight beers on tap – three pour the Gage Roads range, the rest rotate through locals such as La Sirene Citray Sour and Wolf of the Willows XPA. House-made syrups are used in cocktails such as the Kraut High Tea, a whisky sour with tea syrup. And Old Ruba, a sweet and spicy affair featuring Kraken spiced rum and citrus. Cocktail samplers are $30 and arrive in long, narrow jars with tasting glasses, designed to let you and your squad sample a few before splashing out.

Wines are all from the south-east of Australia, with three reds, three whites, a prosecco and a rosé all offered by the glass.