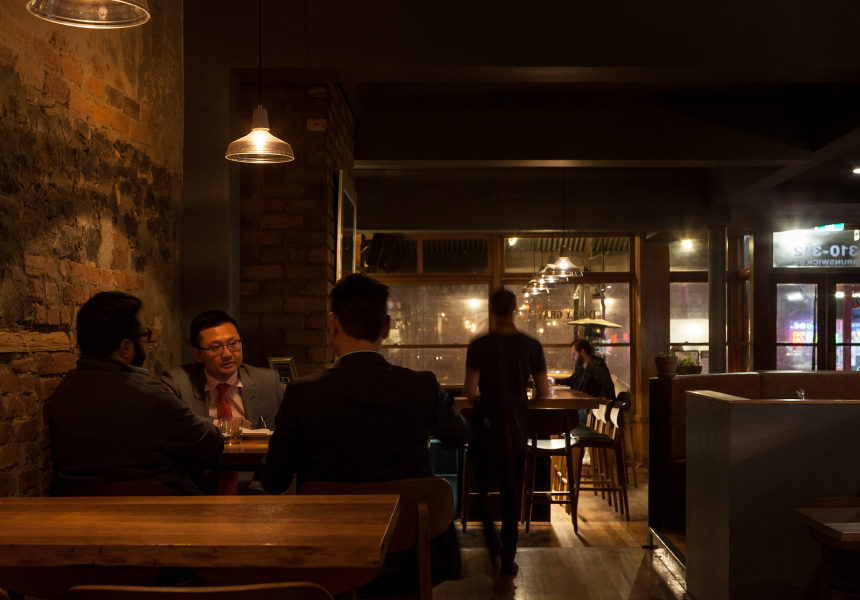 Dolly Gray was a brothel owner, “gun moll” and the first wife of infamous 1920s Melbourne gangster Squizzy Taylor. She survived both a gunshot to the head and a brutal bashing before she moved to Adelaide when her relationship with Taylor soured. Her name – in gold letters, no less – has resurfaced in Melbourne at a new bar and bistro on Brunswick Street.

Inside Dolly Gray there’s a crew of Melbourne hospo veterans, with front of house under the command of Captain Baxter alumni David van Iersel and Brad Dowling, and the kitchen overseen by ex-Circa head chef Rhys Blackley.

Cocktails are a focus and they wrote the list with classics in mind. A standout is the Spiced Bourbon Sour, which uses fig and cinnamon bitters and bergamot syrup. Mare’s Neck is based on a 1920s drink called Horse's Neck – the bar’s contemporary version is made with cognac, yuzu liqueur, smoked ginger and raisin syrup.

The rest of the drinks list emphasises Australian producers. The beer is approachable and crowd-pleasing, featuring local breweries such as Balter and Red Hill. There are wines by well-priced smaller producers such as A. Rodda chardonnay from Beechworth, or Allies’ Tuerong pinot noir from Mornington.

While it’s the booze that will get you in, it’s the aromas from the kitchen that will keep you seated. Blackley cooks half or whole barbequed Milawa chickens, steaks, or slow-cooked lamb shoulder over a red gum and fruit wood fueled grill.

The team took a jackhammer to large sections of the space’s concrete walls, exposing brick and bluestone beneath. The original floors remain, and dark polished wood and leather-cushioned seats give Dolly Gray a warm, comfortable feel. The ash-coloured paint job is apt given the smoke that rises from the kitchen grill. A painting of the restaurant’s namesake hangs on the back wall, watching over the dining room.