For the past 19 years, Andrew Mcleod has been practicing his trade at the now iconic Chapel Tattoo studio. Inking three tattoos per day, you’re left with an astonishing figure of approximately 20,000 tattoos in his time. 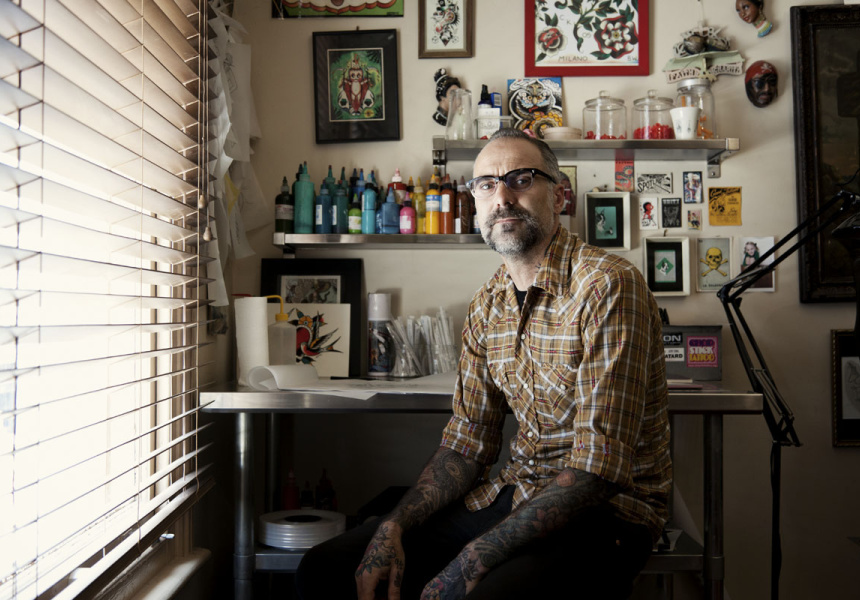 Each night, Andrew Mcleod sits in front of his desk, methodically illustrating the tattoos he is set to ink over the coming days. A studious and disciplined artist, his persistent approach to the profession is far from the disengaged schoolboy habits which initially steered him towards the culture.

“I always had a fascination for tattoos,” he recalls. “My dad had some and I even did my first one myself while in high school. I simply used some cotton, a needle, a match and some ink. Being into punk rock I had to have a Dead Kennedys logo on my finger,” laughs Mcleod. “We all tattooed anarchy symbols and shit like that for fun.”

While he grew up with an avid interest in the art form, it wasn’t until Mcleod came across the work of Chicago native Guy Aitchison that he developed a real desire to follow a career in tattoo art. After corresponding with Aitchison over a length of time – eventually meeting him while he was on an Australian holiday – Mcleod finally decided that he was ready to start his own tattooing adventure. All it took was a little guidance and a word of encouragement from his first artistic hero.

That said, it wasn’t exactly easy to begin with. Gaining experience in such an underground occupation takes a rare level of commitment. “When I started my apprenticeship 19 years ago here at Chapel Tattoo, I used to have to practice by tattooing my friends on a Thursday night in between the few walk-ins offered to me. It was only then that I was able to experiment. It was so good for me at the time and I'm so grateful for all of those guys that came in,” he says.

The fact that Mcleod now part-owns Chapel Tattoo and has assisted with transforming it into a nationally revered institution is an overwhelming achievement in itself. But it’s really the quality of service and execution offered by the studio in what Mcleod says is now a diluted market that separates his business from the rest.

Mcleod isn’t enamoured by tattoo culture’s ascension to the mainstream in recent years. “There's heaps of shit out there,” he rues. “I won't lie, it's good for business, but it makes me sad in some respects because the mystery has disappeared and it used to be much more underground. When I was starting out, people would in fact give artists more freedom, and seek them out for their individual style.”

And evidently, it’s the purist and classic anarchist in him that has taken the biggest hit. Although financially rewarding, the culture that he once found solace in as a younger man has grown into a popular culture beast that is now even the topic of trashy Hollywood reality shows.

As he sits in his well-kept studio and casually rolls himself a cigarette, it’s clear that Mcleod is an old-school kind of guy. Even though he doesn’t like it when people use the umbrella term, it seems certain nonetheless. Dressed in a blue plaid shirt, donning a classic side part and even listening to some 30s blues jams in the background, it’s this apparent love for a past culture that simply adds to the artist’s charm, and allows him to truly specialise in tattoo designs from a former golden era.

These days, Mcleod happily explains that he has the luxury of picking and choosing his work. Sought out for his clean, vintage aesthetic, the artist appreciates tattoos that are bold and simple. “Over the years, I've worked out what both my strengths and weaknesses are and it’s nice that people seek you out asking for certain things. I enjoy the fact that it nowadays can work like that for me.”

After almost two decades in the field, Mcleod is also still as passionate and dedicated as ever. “Nearly every week, there'll be a tattoo that makes me realise exactly why I'm doing this, it’s the same feeling each time. It's hard to describe – it may be a small, basic tattoo, but when you've been doing this for so long, it's still awesome when everything artistically goes right,” he urges.

“There's a new generation creeping up behind me and it's amazing to see what some of these young guys are achieving,” he says. “It blows me away and is inspiring, but it’s also a reminder of what I have to do to keep up with the trade.”

Taking a moment to collect his thoughts, Mcleod leans back in his chair. With a merry smirk pasted across his face, he asks: “What else am I ever gonna do?”