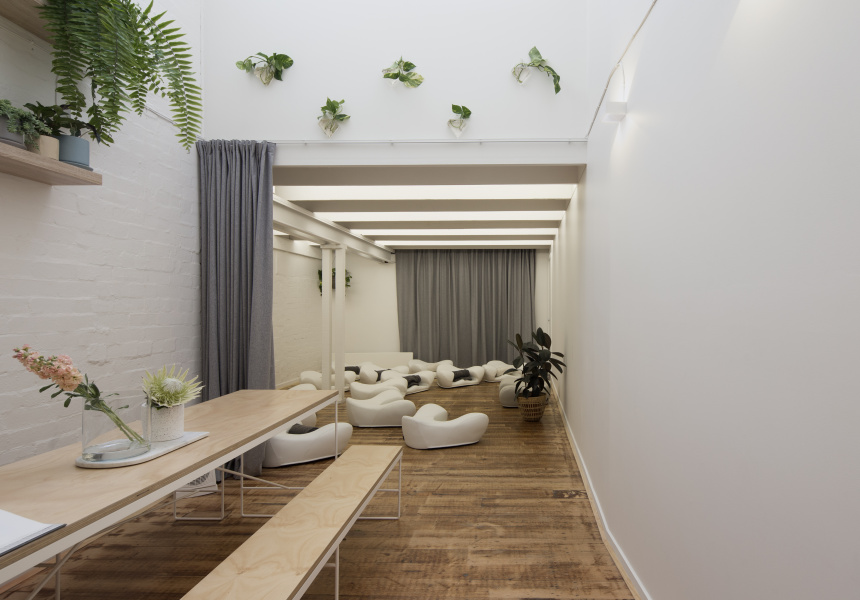 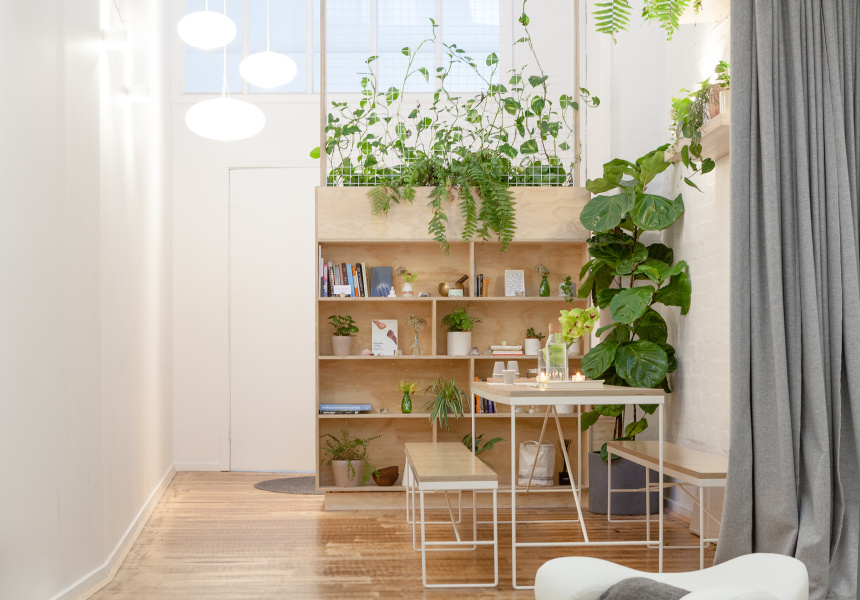 His doctor prescribed anxiety medication, but that didn’t sit right with him. So a friend recommended a yoga class with a Buddhist monk. Though Dias grew up in a Buddhist household in Sri Lanka, he’d lost touch with the traditions when his family immigrated to Australia. Despite his distance from meditation practice, he struck up an immediate connection with his new teacher. “I practised with him every day for five years and he’s still my guru today,” says Dias.

Since that first yoga course, Dias has been teaching yoga and meditation in studios and workshops around Australia before returning to Melbourne with the goal of opening his own studio.

That goal is now reality – A-Space Studio in Collingwood – which Dias opened together with a former student, Josh Lynch. You enter off a cobblestoned lane and walk through the narrow corridor to a small room with one long table, dangling ferns and tea. Beyond a thick curtain there’s a smaller room with 15 or so meditation seats, which are “like sitting on a cloud”, says Lynch. And that’s about it. It’s intimate and quiet.

Dias and Lynch first met just over a year ago, in a yoga class run by Dias (the “Yoda of yoga” Lynch calls him). “We just hit it off,” says Dias. “We had coffee that went for like five hours, and we started talking about names for studios. After we left, Josh messaged me saying, ‘Hey bro what about ‘a space’, like “a hyphen space”?’ And it just kind of stuck.”

According to Dias, A-Space is Australia’s first multi-disciplinary meditation studio. It offers only a few classes a day. A variety of meditation practices from different traditions are taught, each chosen for its accessibility and the different need it addresses.

From pranayama meditation for increasing and managing energy levels, to mindfulness meditation for a clear mind, Dias says each class is presented free from religious dogma. “We’re demystifying meditation,” he says. “It’s not all incense and ‘omming’.”

Dias and Lynch created A-Space with two intentions in mind: help people connect with their own thoughts, and therefore connect with others. It’s a space to slow down, be introspective and “genuinely feel connected to the person next to you”, says Dias.

While Dias and Lynch describe meditation as an insular process, they believe practising with others can help them to better understand themselves. “Looking at the [meditation] apps, there’s no way I can connect to this device,” says Lynch. “But someone can come here and hear someone else across the room, that they’ve never met before, bring up an issue that they’re having, and realise they’re not alone.”

For Dias, switching from marketing to meditation has clearly been a canny career move: “Meditation has given me a moment to genuinely feel something – that what I’m doing right now is really meaningful,” he says.