Bill Henson on the Indecisive Moment

Ahead of his new exhibition at the NGV, the formidable Australian photographer talks to Broadsheet about anti-portraiture, controversy and why the art chose him. 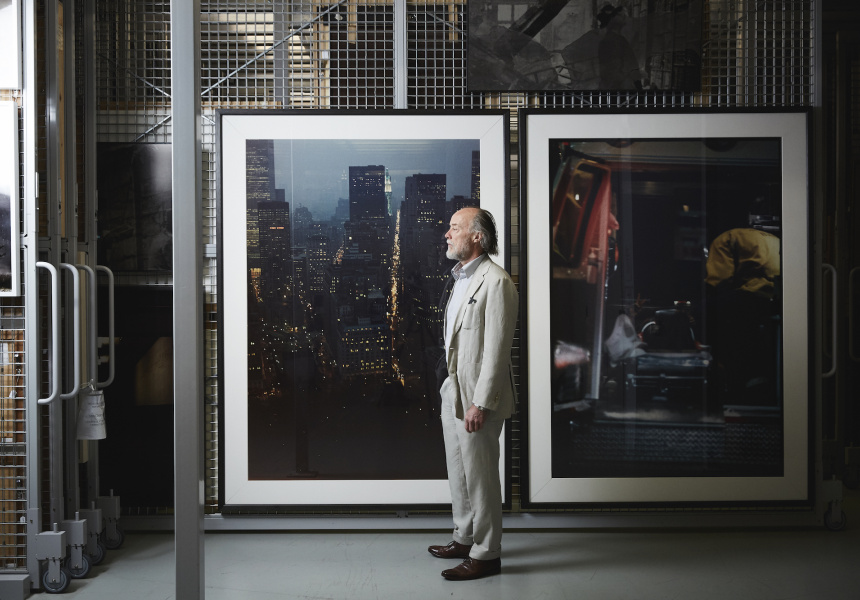 In the NGV’s Salon Room, 93 nineteenth-century Australian oil paintings are being packed away. The canvases have hung there for the past six years but everything’s coming off the walls to house 23 photographs by one of Australia’s pre-eminent artists, Bill Henson. Henson requested this space for his new exhibition, rather than one of the more contemporary-feeling temporary exhibition rooms.

“I like this room,” he says. “It has beautiful proportions. It’s the right size for the works. They’ll inhabit the space really well.”

Henson has always tried to control the space in which his work is exhibited, whether it’s a crumbling palace in Vienna or a disused power station in Spencer Street. The way the work is presented is an extension of the picture itself, and when you hold as much sway as Henson, you can disassemble a permanent exhibition because you like the room.

This new show, part of the NGV’s Festival of Photography, is made up of works from 2008 to 2011. It was never planned as a discrete set – that’s not how Henson works these days.

“It’s part of the ongoing series that is all of my work, as the decades slide by,” he says. “It’s just me putting things next to each other and seeing what works.”

If something is tying them all together, it’s not location. (The photos were taken all over the world, including somewhere off the coast of Capri, in a field near Agrigento in Sicily, inside the British Museum, Milford Sound in New Zealand, and in Henson’s studio in Melbourne.)

It’s not the subject matter, either. There are landscapes, portraits and studies of sculptures and architecture. They all involve the depth, eerie stillness and dreamy, gothic fog that are present in the best Henson works. Like all of his pictures, these do spectacularly dramatic things with light. They never settle on a single detail. Shots taken in the British Museum show people looking at paintings, but your eye doesn’t rest on the paintings or their audience – the true subject is the act of looking itself.

“They speak to each other in my head. There’s something in my sensibility that sees a connection between these things. It’s as though I’m using words to make a new sentence,” he says. “They have strange concordances.

If you put one thing next to another, Henson says, a third thing happens – a conversation starts.

“It’s not up to me to say what that conversation is. It’ll be about something different for every person. It’d be absurd for me to impose a particular reading.” And he doesn’t want people to listen to him either – he wants them to prioritise their own experience. “When I talk to school kids I tell them there’s no correct way of looking at Rembrandt, there’s only your way.”

He got into art school with a folio of paintings and drawings, but by the time he was submitting assignments he was only interested in photography – it had taken over his brain; it seemed more potent to him than any other medium. “I make things which happen to be photographs,” he says. “If I felt I could draw closer to whatever’s haunting my imagination by sculpting a lump of clay, I’d be doing that.”

Henson was a precocious and unruly student. He rarely turned up to class, and barely did his assignments. Eventually, his teachers told him that though they loved his work, there was no point to him being there. They gently suggested that he should “piss off and do his own thing.”

Around the same time, a teacher showed his work to some curators at the NGV, who immediately offered him a show. Those photos – a series of portraits of dancers in an old ballet hall – have recently been released as a book called Particle Mist. Looking at them 42 years on, the essence of Henson is already there.

“It was the light that drew me in,” he recalls now. “There could have been anything in there. It happened to be ballet dancers. But the light in the room was magical.”

Was he more attracted to the light than the subjects?

The subjects for Henson’s photographs can occur anywhere, and he doesn’t know what they are until he finds them. “It might be a tree,” he says. “It could be the shape of the ground under a tree. I might think I’m looking for a particular face or body.” When he finds it, which might take years, it’s never as he imagined it. “When you find the right vehicle, to sound clinical, it’s quite a big deal.”

Henson has described his approach to portraiture as ‘anti-portraiture’. Whether he’s shooting an anonymous nude teenager, her face shrouded in shadow, or Cate Blanchett, he’s not interested in taking a photo that revolves around a subject .

“It’s what goes missing in the gaps that really animates the work,” he says. “You have to suggest. And the way you suggest with photography is to create ambiguity. Uncertainty. The bigger the unknown space, the bigger the hole for your imagination.”

His choice of subjects has landed him in hot water. In 2008 his photographs of nude teenage models sparked tabloid outrage. The police raided a Sydney exhibition. Even the Prime Minister was asked to comment.

The NGV backed him up; they countered every reported removal of a Henson work by putting another one from their collection up on public display. Eventually, they had a dozen Hensons out of storage. The heat died down eventually, and the vitriol he copped doesn’t seem to have left a lasting impression on Henson. None of it changed the way he approaches his work.

“If anything, it strengthened pre-existing convictions I have about what matters,” Henson says now. “I don’t have the mental space to second-guess the general public. I’m in my daydream, trying to nail down things that interest me. It’s a private, selfish journey.”

Bill Henson is part of the NGV’s Festival of Photography, which runs until August 27.