On a recent winter's afternoon, Melbourne artists Tai Snaith and Kate Tucker came together to talk about working with talented creative women, domesticity gone wild and their new group exhibition, The Cuckoo's Nest. 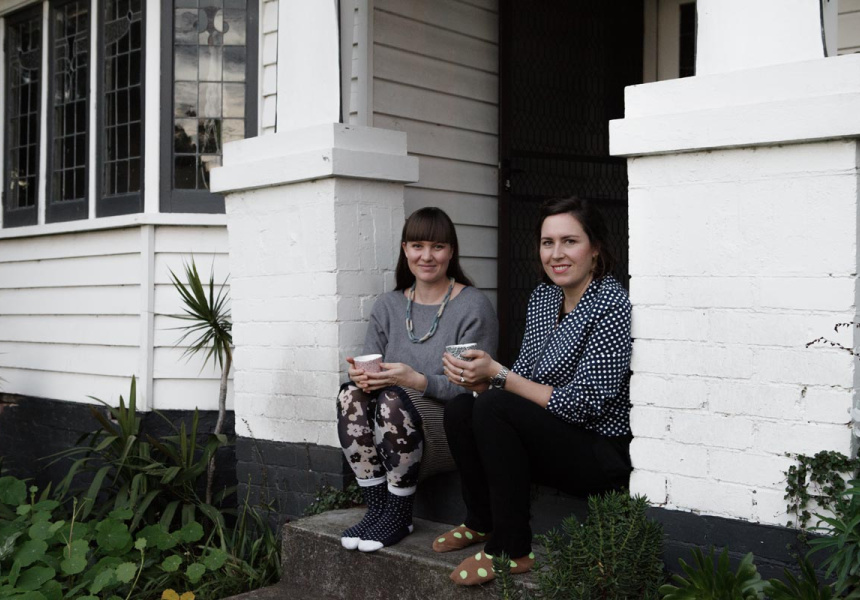 In most bird species, the female builds and feathers the nest before laying her eggs. In the case of the cuckoo, however, she simply lays her eggs in another bird's nest. Artists occupy space in much the same way, their work often ending up in someone else's home, part of someone else's life.

In The Cuckoo's Nest, a group of eight female artists will be treating Linden Centre for Contemporary Art like a display home for a new way of living with art. The show features an all-star cast of Beci Orpin, Siri Hayes, Lucy James, Dell Stewart, Low Phat Wytchkraft (Kate and Jessie Tucker), Ellequa Martin and Tai Snaith, who also curated the show. We sat down with Tai Snaith and Kate Tucker in Tai's very own domestic space and chatted about the upcoming exhibition.

Anna Metcalfe: So what are the key things you're exploring in the show?

Tai Snaith: Well, as an artist, you create work that's loaded with personal meaning, but then you pass it to someone else who puts it into their home and kind of appropriates it. That's quite weird. The work needs to be empty enough for the owner to project their own ideas onto it, but full enough to be challenging or compelling. I wanted to play around with the idea that a lot of art you see in magazines and blogs is very nice looking, but is not challenging. What's the idea? I think the ideas of living with design and living with art are crossing over. Sometimes that works, but they are not the same: art comes from a more personal place, whereas design is like functional art.

Kate Tucker: We are asking, ‘when does it just become superficial?’ In the project, which I'm doing as Low Phat Wytchkraft with my sister [Jessie Tucker], we are interested in the idea of curating a home to present a certain image and that image being fake or branded – just a projection of the life you want the outside world to see. On the one hand, having amazing design and art in your home can be wonderful, but at the same time following interior magazines can be a materialistic pursuit, totally removed from creating a sense of meaning in your home.

AM: While you have been playing with the ideas of interiors and art in domestic spaces, it sounds like the work has become kind of psychedelic and crazed?

KT: Showing the work at a big fancy house like Linden, we're all tapping into the slightly hidden parts of the domestic experience – representing the fake facade, but also the crazy reality beneath. As a group, we talked about domesticity-gone-mad scenarios, like hoarders' houses.

TS: Many of the artists’ ideas have gone a bit nutty. Like Siri [Hayes] showing weapons her kids made and Beci [Orpin] has made birdhouses that go inside – it's nature inside the house. Dell Stewart's work is a ceramic tea set, but it is for mushroom tea, so it is all a bit strange but appealing. Lucy James has collected hundreds of images of men with glasses, categorised them and pinned them all up like a butterfly collection. Lucy's work is interesting because it is like she's a 'man hunter' and turning traditional femininity on its head, but at the same time playing with the idea that you need to collect a man to complete the perfect home.

KT: There's an undertone of danger to the works. It is celebrating beauty and juxtaposing that with stuff that's a bit wrong.

AM: It sounds like some of the work is directly overturning the ideas of feminine niceties and sleek interiors.

TS: The work's breaking down our desires and challenging existing ideas. We are empowering domesticity. All of us in the show are living quite domestic lives in our own ways, but are strong women. The show also raises the idea of what you do behind closed doors and looking at the awkward part of living. Siri's works are prints of her Instagram photos. They came about because she wouldn't let her kids have toy guns, but then they started making weapons out of wool and sticks and things they found at home… Often we create this stylised image of ourselves online, that is totally unreal and perfected. The internet has changed the way we present ourselves outwardly and the show is trying to unpack some of that. The Selfie Quilt I made was quite hard for me to put out there, I've been taking these photos for two years and I was looking at them glowing in their folders, and I just thought well, fuck it, that is what I do every day.

AM: This is all quite self-reflective. Ellequa Martin's Thinking Chair is all about reflection – she has created a chair to contemplate the universe on. Your piece Taste doesn't reflect on life in this way, does it Kate? It is more about an idea?

KT: Yes, we wanted to look at the idea of the 'good room' and setting up a table centrepiece so everything is just right. We've created a banquet, and used a rainbow symbol to tie it all together, so everything has a rainbow on it or in it. There's a rainbow trout with rainbow guts. The overall image we created is totally over the top!

KT: Exactly! It is all kind of absurd, but also fun and celebratory. Jess and I have always been the lady at home embroidering and making things, so it is interesting to say ‘Okay, let's make whatever we want to make and include anything that realises the idea’, and use all of our skills in an intuitive way to make an expression of both craft and aesthetic object. Through combining those two things we constructed this really detailed vision. It is very detailed. It is about giving ourselves permission to do that, too. We just let ourselves go – no limited colour palettes here!