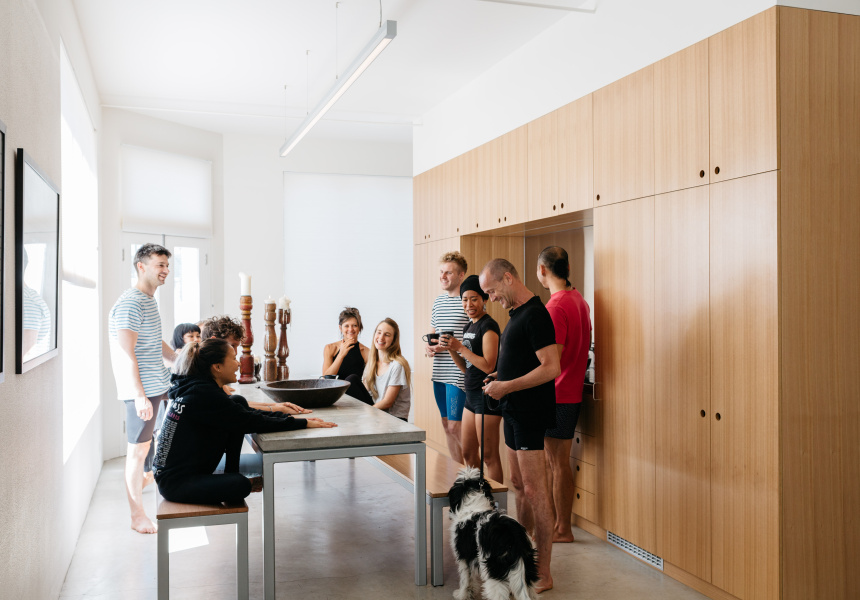 A glass and concrete atrium housing granite boulders isn’t a feature of most yoga studios. But that’s what you’ll find at Simhanada Ashtanga in Collingwood, where a yoga school has been reimagined in polished concrete, steel beams and glass blocks.

“We wanted it to look like it came out from the ground,” says co-owner and head teacher Eoin McCarthy. “A real earthy, solid structure.” He’s referring to the hulking raw steel staircase that leads students up to one of two practice studios.

The hefty granite boulders, which look as if they’ve been excavated from the ground, sit in a pile beneath the stairs. It’s a monumental version of a Zen rock garden, and a reference to McCarthy's time in dojos (martial arts spaces) in East Asia. For all the grey, heavy materials, the end effect is unexpectedly calming.

“My background is in martial arts and Buddhist spiritual practice,” McCarthy says. “The Zen influence is that it looks simple on the surface, but it’s complex underneath.”

Simhanada occupies a heritage-listed building. Originally a hotel in the mid-1800s, it was later a bakery, then a corner store. For much of its recent history, it was dilapidated and filled with graffiti.

When McCarthy and business partner Kaz Kingdon bought the property in 2015, it had no roof. “It was a huge risk,” McCarthy says. “But within one minute of walking upstairs, we both looked at each other and thought ‘this is it’.”

“The brief was based around the idea of grounding,” Stampton says. “Eoin was pretty clear that the space needed to be solid and strong, but also give light. It was a balancing act, just like in yoga.”

When it came to construction, knocking out space for more windows wasn’t an option due to the heritage status of the building. So Stampton installed a glass ceiling and built frosted-glass change rooms lit by LED lights.

“There’s not much natural light downstairs, so we put the change rooms in the middle of the space, and made them out of glass blocks,” he explains. “The LED light enters the glass and the changerooms become lanterns – yet they still allow for privacy.”

Elsewhere, warm timber lines the yoga studio floors and kitchen cabinets, and the ceiling, windows and yoga mat rack feature a dramatic grid motif – a reference to the structure and repetitiveness of Ashtanga yoga.

“We wanted the space to be aesthetically beautiful,” McCarthy says. “But it was built for a purpose for students and teachers.”

“They spend time here after class in the kitchen,” Kingdon adds. “The nicest thing for us is that the studio is filled with committed students.”