The Wonder of Media Art at Experimenta Recharge

Packed with the innovative, beautiful and bizarre, Melbourne’s sixth international biennial of media art will change your perception of what art is. 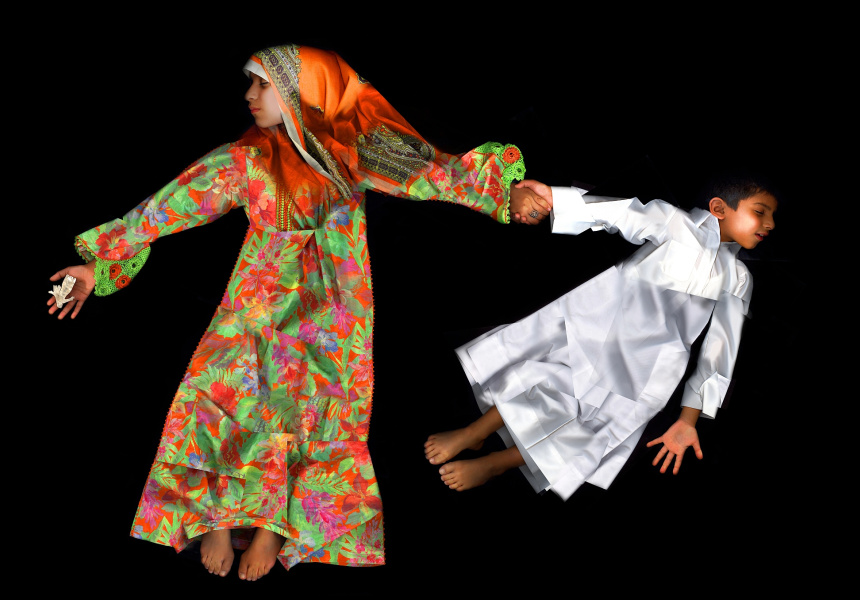 Maitha Demithan - To the Moon

Maitha Demithan - To the Moon “Every single work in this exhibition has needed a power point at some point in the process,” says Jonathan Parsons, the artistic director of Experimenta, an organisation that since 1986 has gathered artists from around the world for its biennial media art exhibition.

On the most basic level, he explains, that’s what makes media art different from other artistic traditions such as portraiture and painting.

It’s a diverse art form that’s inextricably linked to the computer, which revolutionised the ability of artists to play with and integrate various media in a way never before possible.

There’s a plethora of works in the 2014 biennial, Experimenta Recharge, which testify to this. Tripoli-born Australian artist Khaled Sabsabi’s work is a 100-screen, three-dimensional photographic installation called 70,000 Veils, a reference to a teaching in Islamic Sufism, which he often explores in his practice.

“Each of those screens has 700 images rotating on repeat over 700 seconds,” Parsons points out.

A less obvious illustration of the same thing is an extraordinary set of life-sized, quasi-photographic portraits by Dubai-based artist Maitha Demithan. At first glance these images look like particularly luminous, large-scale photographs of a young girl in a resplendent red dress, or a young boy in an ivory kaftan. But there’s something uncanny here. Demithan used a flatbed scanner to scan the individual body parts of her family members, before digitally knitting each section together to create complete, life-sized portraits.

The one exception to the power-point rule is an interactive project by Leisa Shelton, whose work involves her speaking to people about their experiences of media art – findings she has chosen to document on – of all media – archive cards.

“They are the most stable form still in terms of longevity,” Parsons says. “That gives you an idea of some of the cultural issues about digital media and about whether in 20 years time we’ll even have access to a lot of these works.”

Experimenta Recharge features multidisciplinary works – from sculpture to robotics to 3D printing to biology to sound art, by artists from Australia, Brazil, Germany, Japan, The Netherlands, the United Arab Emirates and the US.

Naturally, many of the works selected for Recharge deal with that very idea. Melbourne-based media art collective Cake Industries used 3D scanners and printers to create portraits of 15 members of their community, reinvigorating the practice of portraiture for the 21st century. Artists Yunkurra Billy Atkins and Sohan Ariel Hayes use vivid digital animation to retell an ancient indigenous story.

One of the most bizarre and fascinating works in the exhibition is an installation by Svenja Kratz, whose practice fuses art and science. Using knowledge she gained while working with cell and tissue culture at Queensland University of Technology, she has brought the story of a girl who lived in the 1970s, to life – literally.

Kratz’s work, from a series called the Contamination of Alice, uses DNA from a bone-cancer cell line called Saos-2, originally obtained in 1973 from a tumour belonging to a de-identified 11-year-old known only as Alice. Years ago, one of the cell samples Kratz was working with became contaminated with a fungus.

“That initially resulted in me having to dispose of all the cell cultures to avoid any further risk of infection but then I started to think about the creative potential of contamination,” she says. “This idea of contamination as a creative force and something that is about transformation – an unexpected encounter rather than something that was unwanted and undesirable.” Moreover, when she examined the fungus under the microscope, she found it “was really beautiful.”

Her installation consists of two faces – one is a plaster cast of the face of an 11-year-old girl (not the real Alice, but a friend’s daughter) and the other is made with a gelatinous substance called agar, which Kratz has injected with DNA from the Saos-2 cell cultures. The second face will grow different bacterial fungi and mould throughout the exhibition.

Before her inclusion in the biennial, Kratz had been coming to Experimenta as an audience member for years. The works are cutting-edge and showcase world-class levels of experimentation and conceptual rigor, she says. “There’s always something that you walk away with that you haven’t seen before.”

As a survey of current artistic practice around the world, biennials should not only act as a catalyst to recharge and inspire artists and their community, Jonathan Parsons says, they should also get, “Audiences excited about what might be possible.”

Kratz’s creation, for example, is art and it’s science. And it will upend any preconceived notion you have about what art is.

Experimenta Recharge: Sixth International Biennial of Media Art runs from 28 November 2014 to 21 February 2015 at the RMIT Gallery before touring Australia 2015-2016.