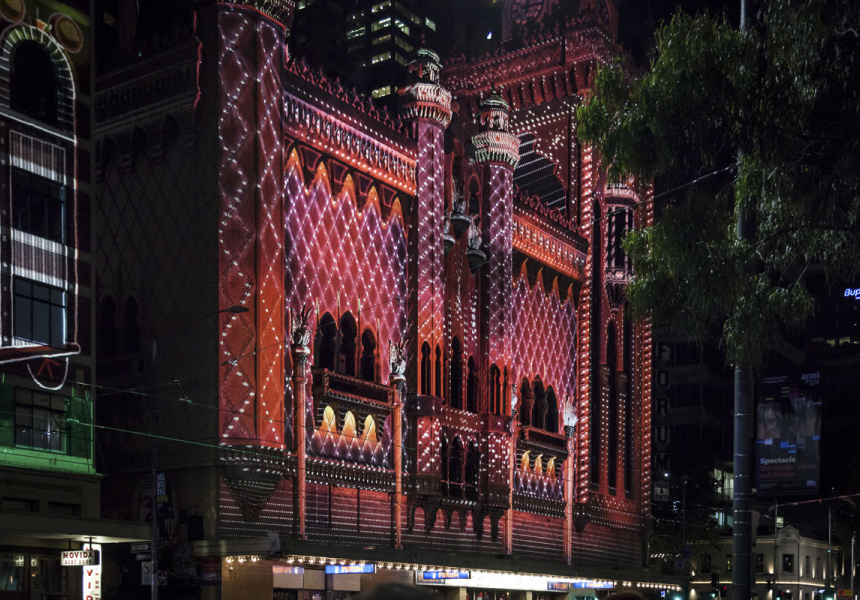 The initial announcement of the 2015 White Night program was released today. In 2015 the event will grow with the addition of a brand new “precinct” at the Melbourne Museum and Royal Exhibition Building.

The all-night festival will include its staples – projection art, live music and wide-ranging installation-based works.

At the media announcement at MPavilion this morning, artistic director Andrew Walsh spoke of the festival’s engagement with both emerging and established artists.

“It’s an environment where fairly out-there work can be displayed, because part of what we’re offering is the opportunity for people to look at stuff that they normally wouldn’t have access to.”

A diverse group of local and international works will be on show, bringing in artists that have exhibited at the Venice Biennale and the Gertrude Street Projection Festival.

One such local is Yandell Walton. Walton is collaborating with I & The Others, (the alias of artist Kirrily Anderson), on Exodus, a mysterious installation that combines street and projection art in a yet-to-be-revealed laneway.

Projection art has traditionally had a big showing over the past two years at White Night, and the 2015 festival sees this grow with 4 Elements – a work by Portuguese collective, Ocubo – which will light up the entire façade of the Royal Exhibition Building.

The Yarra will turn into Little India with Sita’s Garden, bringing Bollywood to the water with live music, murals and Indian street food flanking the banks of the river.

Though the festival acts as a bridge between spectacle and critical engagement with the arts, Walsh says that it’s important that the festival, “Starts a discussion.”

“You can have a deeply intellectual discussion about a work or you could simply ask if someone liked or didn’t like it. It’s accessible, but we don’t de-intellectualise the work,” he said.

Trams will be running services throughout the night. Further announcements for the live music program to come.

The third Melbourne White Night will run from 7pm to 7am on Saturday February 21, 2015.