Where all is (Not) Fair and Well 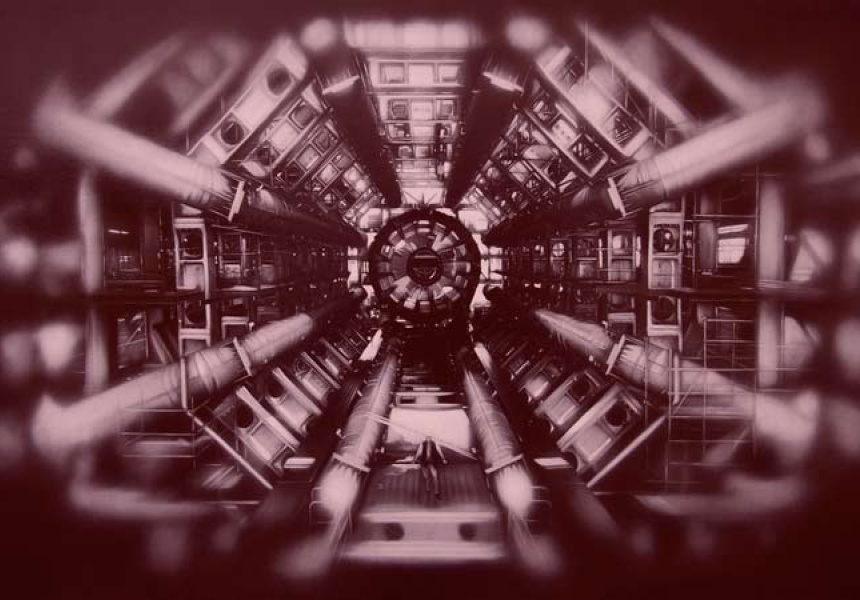 Giles Alexander, The Eye of God Aside from flashing an almost obligatorily mischievous grin, Ashley Crawford is resolute in at least one sentiment regarding his and artists Sam Leach and Tony Lloyd’s inaugural NotFair. The cheekily named satellite event possesses nothing in the way of anti-Melbourne Art Fair sentiments.

“It’s not anti,” he urges, waving a hand by way of punctuation. “It’s an alternative approach. There’s a big difference between what the galleries do and what Melbourne Art Fair does and what we’re doing. I mean, we’re taking 10 per cent on sales. We’re not going to be making profits out of this thing.” He pauses, before giving another salacious grin: “It’s not ultimately established to rape and pillage everybody around, put it that way.”

Giles Alexander, The Eye of God

Billed as an event that merges the “curatorial notion of a major biennale with the commercial potential of an art fair”, NotFair’s title and raison d'être is more an assertion about its participants’ experience of the commercial art world than a stab at Melbourne’s major commercial art exposition. Featuring 32 of Australia’s most undervalued or underrepresented artists, the not-for-profit event aims to eschew the high commissions and outlays of the commercial art model and the gallery focus of the Melbourne Art Fair to, in essence, bring the artists directly to an audience.

“There is that element of NotFair being ‘not the fair’,” offers Crawford, one of Australia’s pre-eminent art writers, critics and authors. “But it is, I think we all agree, making the statement that a lot of artists’ careers are not all that fair. They have to fork out on materials, lose 40 per cent on sales to gallerists and then they get taxed on top of it, so they essentially get hit three times over.”

Held at a warehouse space in a Richmond backstreet, NotFair will see up-and-coming prospects such as Melbourne’s Camilla Tadich, Shannon Smiley and Jake Walker share space with gifted Sydney-based British artist Giles Alexander, Japanese-born sculptor and installation artist Akira Akira and performative photo-artist Mimi Kelly, among countless others. But the line-up isn’t limited to the young. NotFair is equally defined by its engagement with comparative veterans such as Bernard Sachs and Murray McKeich.

“A number of artists reach a point in their career where they’re producing really A-grade work, but for whatever reason they haven’t caught the lucky break,” says Sam Leach, now a household name after winning both the Archibald and Wynne Prize this year. “Maybe they haven’t been curated in the right show or the right prize.

“The fact that the Melbourne Art Fair is on and you have 30,000 people traipsing around in the mood for looking at art, we’re just trying to say: ‘While you’re looking at that, why don’t you look at these guys as well because they’re good too’,” he continues. “It’s just saying that there are these people out there that do great work but it’s hard to actually find their work. Maybe they show in a lot of artist-run spaces or galleries that are a little out of the way. This is just a way of making it more accessible to people.”

The genesis for the project stretches back almost two years, when Leach and Tony Lloyd were in London for the Frieze Art Fair. “We just began to pick up on the fact that there were all these events that go alongside Frieze,” he recalls. “There are satellite art fairs, but also a whole lot of group shows that happen at the same time, and it just seemed to us like there was an opportunity to do something like that in Melbourne.”

Suffice to say, the event took on a life of its own, soon attracting an esteemed 12-strong curatorial advisory panel, including the likes Melbourne University’s Chris McAuliffe, Centre for Contemporary Photography’s Mark Feary, Gertrude Contemporary Art Spaces’ Alexie Glass and Utopian Slumps’ Melissa Loughnan. This board also counts the Honourable Paul Guest QC among its ranks and a host of high-profile sponsors. To top it off, NotFair will host the inaugural Arkley Prize.

For Crawford, the level interest has been overwhelming. “It was just one of those things where as soon as you started talking to people, they got excited,” he says. “It really was a runaway train and we were left thinking, ‘What’s happened?’. It really has taken a life of its own. It wasn’t calculated; it wasn’t planned that way. It was a fun little curated show that suddenly morphed into something else. People got behind it and expected us to take it seriously, so we had to.”

Indeed, before it has even opened NotFair has found supporters in places they’d never considered. “The name has really caught a lot of people’s imagination,” offers Leach. Adds Crawford: “We have a fairly mainstream board behind us now, and somebody did raise it in a meeting: ‘Doesn’t NotFair sound a little bit whingy?’ and all the corporate guys were like ‘No!’. They love it and they really understand about things not being fair to the artists. It might be surprising to some, but a lot of these guys in the banking industry and the legal industry recognised that element straight away and really wanted to get behind it.”

And for NotFair’s organisers, who already of plans for future events in both Australia and the wider Asia-Pacific region, it’s precisely the reaction they had hoped for.

“It’s a real vindication of putting these artists in front of a broader crowd,” says Leach smilingly. “We assumed that people would be interested because the art is good, and they are. To my mind, having an additional event like this can only add to the Melbourne Art Fair. It’s just another reason for people to actually go and see art.”