Walking Between the Raindrops 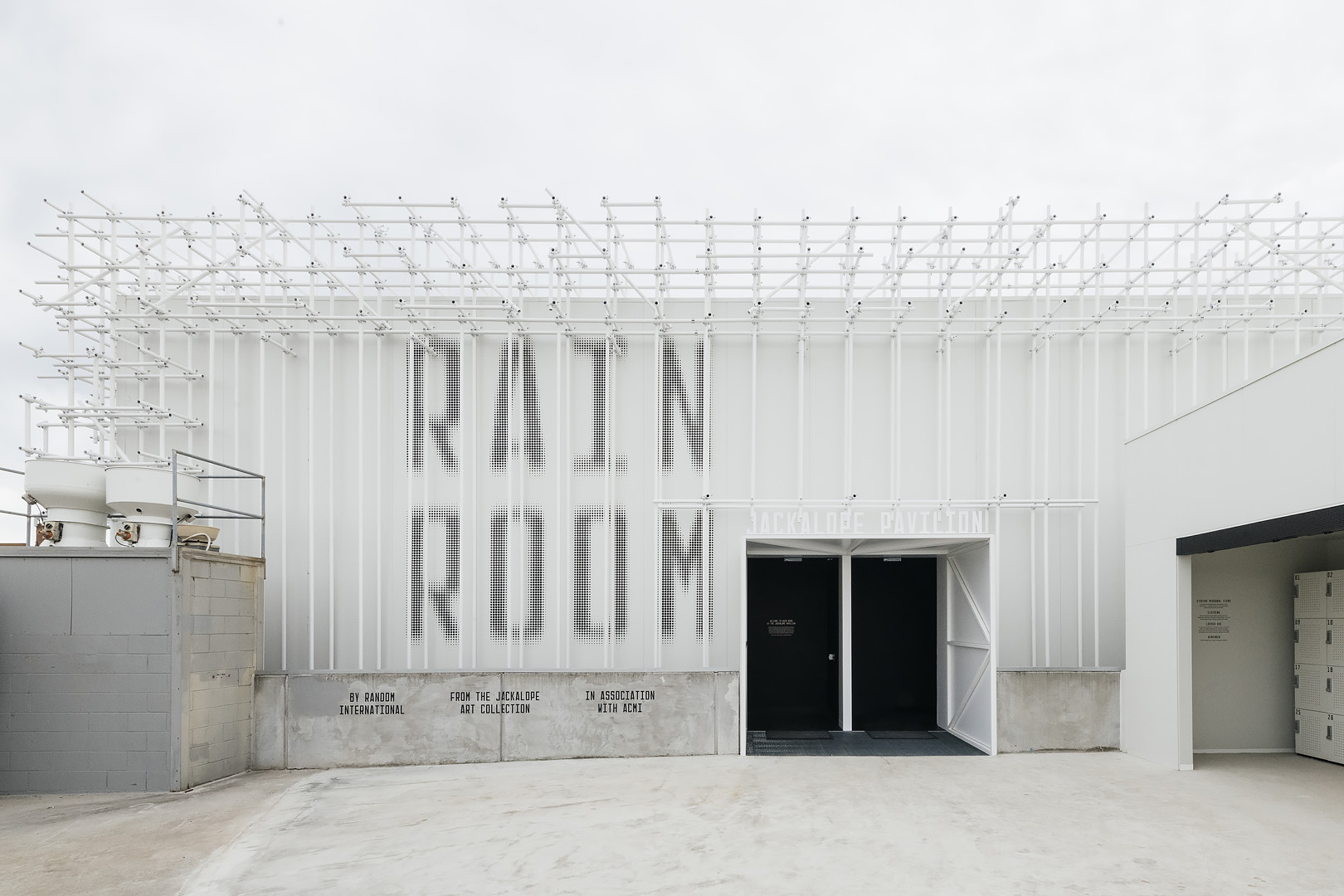 The first step is the hardest. Outside, it’s a grey, wintry Melbourne day. But in this 100-square-metre room, it’s raining. It’s a deafening torrent, glittering against the room’s single, piercing light. Walking slowly into a downpour is, needless to say, against my instincts. But as I step forward into the flow, the water parts. A halo of cool, dry air follows me, anticipating my movements. By the time I reach the middle of the room, just a few stray drops have hit me. I’m in the middle of a torrential downpour, and I’m not getting wet.

It’s an intriguing premise: a built environment simulating a natural one, going against the very purpose of being “indoors”, which is to protect us from the elements. But Rain Room, created by London-based conceptual artists Random International, confers a God-like feeling on audiences that just getting caught in a shower can’t match.

The installation involves a complex combination of valves, pressure regulators, software, 3D tracking cameras and 2500 litres of self-cleaning recycled water. Where movement is detected the rain stops. You’re fully immersed in the deluge while being shielded from it at the same time.

Rain Room is here permanently thanks to hotel entrepreneur Louis Li, owner of the luxury Jackalope Hotel on the Mornington Peninsula and proud new owner of this artwork. Li is serious about art – the grounds of his hotel and vineyard are like a sculpture park. He acquired Rain Room for his forthcoming hotel, Jackalope Flinders Lane, due to open in 2022. For now, the artwork is open to all at a temporary home in St Kilda, designed by acclaimed architecture firm, March Studio.

“It feels calming,” Li says. “It has a healing aspect. It’s like a hand is covering you and you never get wet. But it also changes your perception, and the way you move. When you see pouring rain, you wouldn’t walk into it. So when you do walk through it, you really challenge your ordinary sense of movement.”

For Li it’s about the power of nature. Five years ago, when he was developing the first Jackalope Hotel, he considered gold the ultimate luxury, and themed his hotel accordingly. Now he thinks nature is. The new hotel’s foyer will be a forest, the bar will be cloud-themed and at the centre of it all, there’ll be a room of rain.

Random International was founded in 2005 by two Germans, Hannes Koch and Florian Ortkrass. Together, they produce art with a strong technological underpinning. In 2017 they created a flock of autonomous hovering white spheres that react to their surroundings. The previous year, a mirror that reflects the normal environment but blurs out any human that steps in front of it.

But Rain Room, created in 2012, is undoubtedly the duo’s most famous and well-received work. They were originally investigating ways of manipulating water, and at the same time talking about how technology recognises bodies in a space. Putting the two together, they struck upon this poetically simple idea.

“But if you actually want to do that, it’s insanely complicated,” Koch tells me. The duo spent four years developing it into a working installation. “Often with our work, the hardest thing is to keep it simple and not dilute the initial impetus.”

As I speak to Koch on the phone from Berlin, the winter rain hammers the roof above my head. What will Melburnians make of an artwork that introduces yet more rain?

“We’re super curious about that,” Koch says. “When it opened in England it was October, and it was pissing down. Who on earth would come voluntarily queue up to see indoor rain?” And yet the work generated hours-long queues. The same thing happened at New York’s Museum of Modern Art, at Shanghai’s Yuz Museum and at the aforementioned LACMA.

Over the past seven years there’s been a lot of discussion around the meaning of the work. Koch says it came out of discussions about our increasingly automated environments.

“It’s responsive architecture,” he says. “You are being made to feel fully in control. You feel as if you’re protecting yourself with your sheer presence. But it’s a complete illusion. You’re being tricked into that by a very powerful multi-sensory experience.”

For Koch it’s a response to the soaring instances of our behaviour being tracked, analysed and exploited – particularly by new media. “The increasing automation and digitalisation of our lives is something that really bothers us and dominates our thinking,” he says. “How much control we do we want to give up to the automated world?”

But he’s found that wherever Rain Room opens somewhere new, it means something new.

When it arrived in Los Angeles in 2015, California was in the middle of one of the worst droughts in its history. Koch says it changed the way people interacted with the work. It was interpreted as being a comment on water scarcity. He watched as families brought their kids in, outsmarted the tracking system and got wet. In Shanghai, which is in the midst of a water pollution crisis, it wasn’t the quantity of the water that interested people, but the quality. In the United Arab Emirates, known for its extravagant architecture, the discussion was around how the built environment responds to human movement.

Though it’s eminently Instagrammable, the power of the work is that, like nature, it’s not something that can be captured adequately in a photo. It has to be experienced.

“One of the reasons we did this was because for us it was hard to imagine,” says Koch. “How it felt was something we needed to feel for ourselves. I’m not one of these amazing 3D visual people. I need to build something to understand it.”

Rain Room is on from Friday August 9 to and Sunday September 30 at Jackalope Pavilion, corner Acland and Jackson Streets, St Kilda. Tickets cost $31.10 for adults and $18.90 for children.