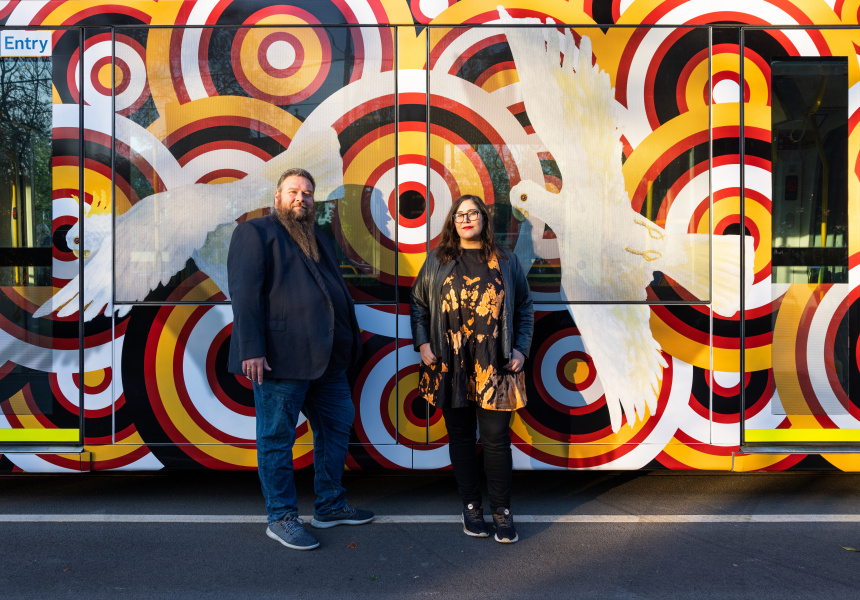 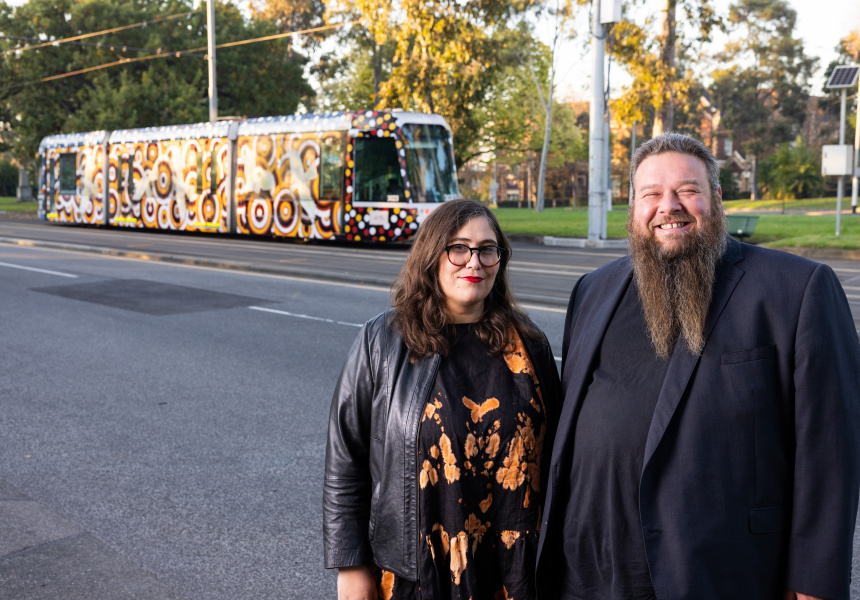 I grew up in inner Melbourne surrounded by my culture, my community and staunch Koorie and Torres Strait Islander grassroots activists, artists, and leaders of the ’80s and ’90s. When I was outside of that bubble – at school, around strangers and even friends – I had to silence parts of myself. I never hid my heritage or culture, but I was constantly othered.

I’ve always been a proud Boonwurrung woman, but as I age, I’ve realised that I often made myself small and hid parts of me from an imposed shame. Shame is a wound within the First Peoples community, inflicted by the intergenerational trauma of colonisation that forced us to stop practicing our culture and language – something my mother experienced and has fought to change.

Over the last few years, I’ve also been working to deconstruct and break free of these feelings of shame and fear through my art. I create work that comes from my lived experience learning from my Elders, who educated me on culture and language so subtly that the knowledge became as easy as breathing.

I want my work to do the same thing, where you might not even know you’re being taught something now, but one day the knowledge has become a part of you. I do this by telling the Elders’ stories and my own, unapologetically, in my authentic voice. I use bold colours to make the often unseen, seen; imprint designs influenced by Kulin designs; use and reclaim cultural language, stories and memories; and reclaim physical space, as with my Flash Forward permanent public art works in Melbourne’s laneways and last year’s 2021 Melbourne Art Trams, one of six First Peoples’ designs shown on the tracks for a year.

That tram was the highlight of my creative career and one of my proudest moments, especially as someone born in Melbourne, where trams are part of our collective history. I created art based on my mother’s stories of the iilk (eel)’s journey cycle along Elizabeth Street – which was originally a creek running from the Birrarung (Yarra River) – using a style influenced by my Kulin heritage, in a city where it’s mostly been erased.

I’m very honoured to be this year’s Rising Art tram curator, following in the footsteps of Kimberley Moulton. I’m passionate about celebrating First Peoples artists and creatives that may not be seen otherwise in the mainstream institutions. That’s the best thing about public art like this. Trams are huge, imposing creatures that travel all around Melbourne. You have no choice but to pay attention to them. They’re even part of the soundtrack of this city.

Fifty-five artists responded to our EOI in December, speaking to the theme “Unapologetically Blak”. Kuku and Erub/Mer artist Destiny Deacon developed the word “Blak” in the ‘90s, as part of “a symbolic, but potent strategy of reclaiming colonialist language to create means of self-definition and expression”.

I grew up around artists like her. I was the annoying kid running around art gallery openings my mum had dragged us to. I never really understood her work till I was much older, though I was always fascinated with the dolls and photographs of her family that I grew up around. The first time I ever saw Black written Blak was in the early ’90s, on my sister’s fridge, on a picture of Daffy Duck. Redefining a word that’s been used to label and misrepresent us seems like such a small act, yet it’s proved incredibly powerful. Decades later, Destiny’s work continues to inspire Aboriginal and Torres Strait Island people. This is what I wanted to pay homage to the work of Destiny, and that of the Melbourne art community I was raised in.

We commissioned six Art Tram designs all up. Five are contemporary artists living and working in Victoria, or from a Victorian traditional owner group. The sixth tram is a very special recreation of a 1991 art tram design by acclaimed art- ist, painter, and sculptor Lin Onus (Yorta Yorta). This work was created working closely with guidance and support from Lin’s son Tiriki Onus.

The way this year’s trams differ from last years is, I wanted to include a mixture of Elders, established and emerging young artists. They’ve focused on telling the stories of their lived experiences, referencing connection to Country, women, traditional cultural practices, Blak love, Blak joy and honouring people who came before.To me, “Unapologetically Blak” means toasting our success, growth and continued desire to be stronger as a people. It’s recognising our mob disrupting and redefining what being Blak means to them. It’s celebrating our diverse identities, without shame. It’s taking back space to express ourselves as artists and inspire the next generation. It’s sharing experiences and stories that often go unheard and forgotten.

In my community I see so many talented young artists who get cut up to fit into the boxes of others’ expectations. I don’t want that for my nieces and nephews. I want them to see their stories in the city. I want them to have pride in their culture and know their voices are important.

Art is the soul and heart of Melbourne. It’s what makes it one of the best cities. I smile when I see colour, culture and life go by the people while they rush to work or have their morning coffee. These trams become a part of the fabric and identity of what makes this city so amazing. We’ve had a rough go of it these last two years – I hope these trams bring joy to those who see them. 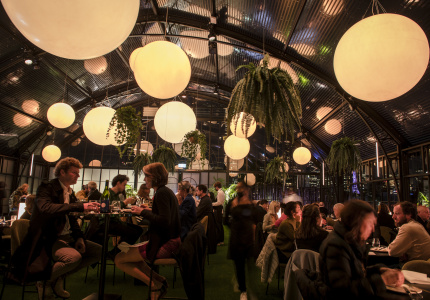