Triennial First Look: A Colossal Buddha Settles in at the NGV

The first of the NGV’s new commissions for its enormous summer blockbuster has been unveiled. It would’ve been impossible to hide. 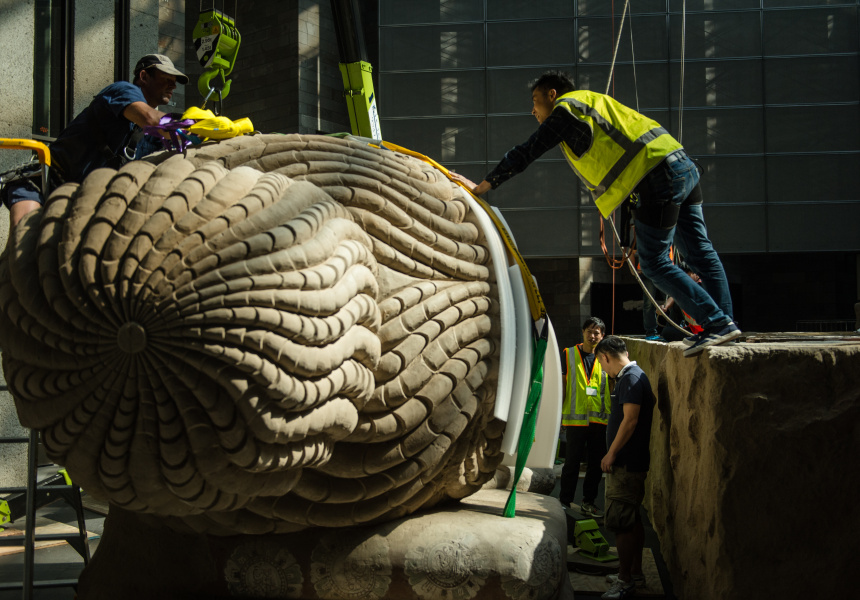 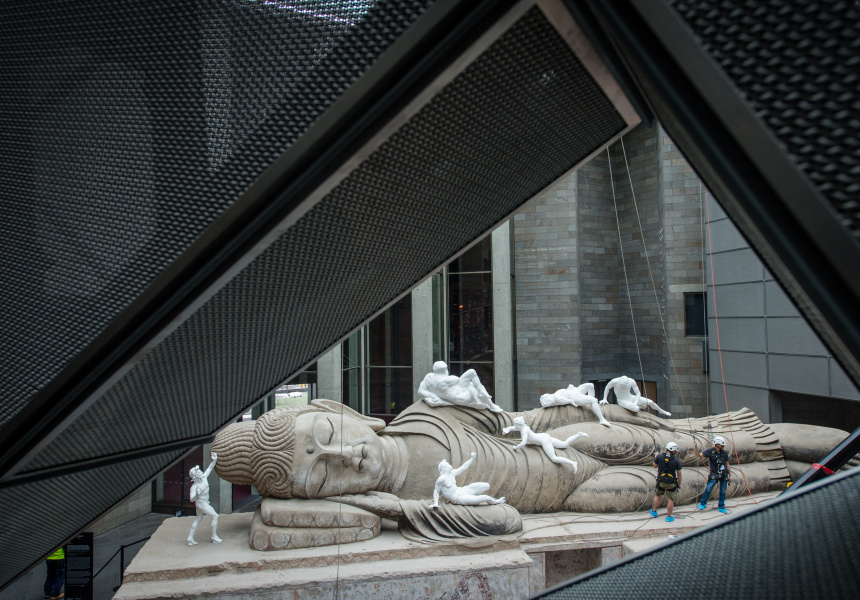 A typical Monday morning at the NGV. Just past the bag check in Federation Court, a spider-like crane pulls life-size models of familiar European statues from wooden crates and arranges them across a 16-metre long reclining Buddha sculpture.

This is the latest piece in iconic Chinese artist Xu Zhen’s Eternity series, and the first look at a number of large-scale works the NGV has commissioned specifically for its upcoming Triennial – an unprecedented gallery-wide exhibition that begins in December.

The NGV naturally remains open during the install period, which means the moving in of certain works – such as Xu Zhen’s – happens in full view of the public. In this case the process is carefully managed by a trio of Zhen’s staff, while NGV senior curator Simon Maidment looks on nervously. Despite its scale, the sculpture is handpainted and delicate. All the marks and paint daubs have been meticulously documented and replicated.

“Normally, we do all this behind closed doors,” says Maidment. “It’s a bit odd doing it with the general public watching.”

This piece is close to Maidment’s heart. Zhen, who is one of China’s most influential and celebrated contemporary artists, first proposed the idea to Maidment two and a half years ago. The curator jumped at the chance to commission it.

The work, – with its 3D-scanned and cast Euro-classical sculptures virtually draped across the giant Buddha – feels like a thematic introduction to the Triennial itself: a huge expression of diverse, cross-cultural and cross-generational ideas showcasing cutting-edge technology and innovation. Installing Eternity-Buddha in Nirvana in full public view is a statement about what’s to come.

“I’m not sure we ever thought of that,” Maidment says. “But yes, it seems obvious now.

“It would have fit elsewhere in the gallery, but it wouldn’t have the same impact,” he adds. “The natural light, the high ceilings, the multiple vantage points. And with this space being originally a sculpture courtyard, it has a nice resonance.”

The Buddha is a copy of the one in the Nirvana Cave, near Dunhuang in northwestern China, which dates back about 1300 years to the High Tang Dynasty. The statues are reproductions of famous Greco-Roman, Renaissance and Neoclassical works. East and West are cast in a new light. The Hellenistic Dying Gaul no longer appears to be dying, but lazing. Pietro Cipriani’s Dancing Faun reaches for the Buddha’s head. The Buddha is still, ever serene in repose, either unaware or calmly welcoming his Western visitors.

It’s a playful clash of artistic traditions and legacies. Rome and Dunhuang are more than 6000 kilometres apart, but they are not wholly disconnected. Around the time the original version of this Buddha was carved, the cities were connected via the Silk Road.

“Xu Zhen is a fascinating artist,” Maidment says. “He’s critical of consumer culture and interested in what internationalism means to the people of China today.”

For Maidment, this is a tribute to cross-cultural understanding. “Beyond East and West,” he says, “there’s a third way of being.”

At 18 metres long and 15 tonnes, it’s huge, and one of the biggest works the NGV has ever installed. But it’s not the biggest in the Triennial. We’ll be going one bigger in our next piece in this series.

The NGV Triennial opens on December 15.