Transcendence in the Tidal Flats

A striking new sculpture from Japanese artist Takahiro Iwasaki is making its world debut at the NGV. If you see nothing else in a gallery this month, make it to this. 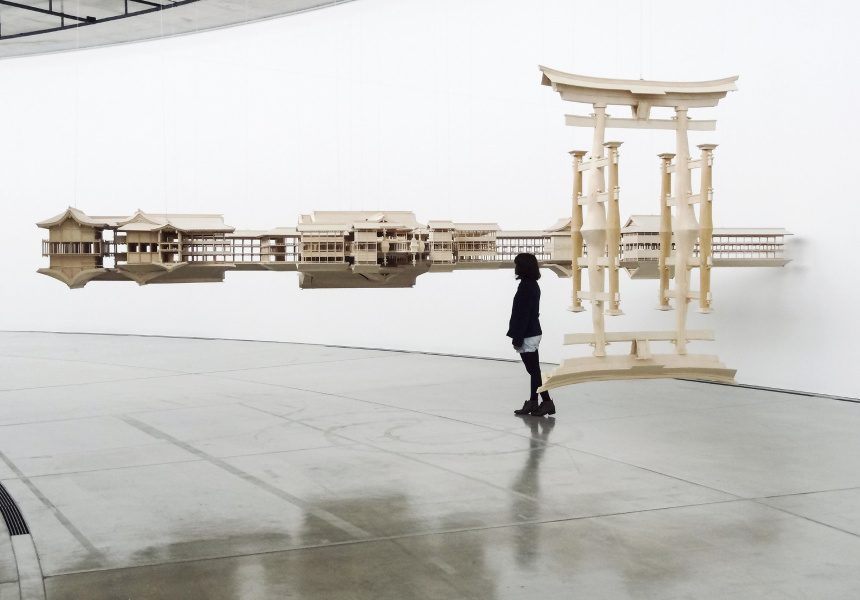 Suspended in midair from the NGV’s ceiling is the latest work in Japanese artist Takahiro Iwasaki’s Reflection Model series. The premise is simple enough. The top half of the sculpture is a scale model of the 900-year-old Itsukushima Shrine, near Kyoto in Japan. It’s eight metres across and built from cypress. Beneath it is the building’s perfect inverse, evoking the illusion of the real shrine’s reflection as you would see it in the high tide of Hiroshima Bay.

Itsukushima is the third temple to feature in Iwasaki’s Reflection series, after recreating Kyoto’s Golden Pavilion and the Phoenix Hall, outside of Kyoto.

“He’s a young artist I’ve been watching for the last 10 years or so,” says Wayne Crothers, the curator for Asian art and the man responsible for commissioning the work. Crothers explains the transcendental proposition behind the series: “These are all halls of worship for Buddhist and Shinto religions. Both these religions offered a paradise beyond existing life,” he says. “They offered a dreamlike world, or Nirvana, in Buddhist terms. To do that, the temple was created to appear as though it had been released from gravity, floating in the air, released from daily toil, daily concerns and desires.”

As a student Iwasaki became fascinated by reflections in bodies of water, from lakes to roadside puddles, and the associated feeling of weightlessness. The Reflection series is a culmination of this fascination.

Iwasaki’s other recent work includes his Out of Disorder series, in which a diverse range of architectural icons are rendered in miniature and taken out of context. What we see are tiny models of Coney Island’s Wonder Wheel sprouting from a beach towel, powerlines emerging from toothbrushes and an intricate landscape carved into a roll of electrical tape.

Iwasaki’s Reflection Model series is somewhat upscale from that – but it still makes for an interesting look at the relationship between architecture and environment, longevity and tranquility. The real Itsukushima shrine is pushing a thousand years old. “It’s amazing when you think of it being wooden,” says Crothers. Those familiar with Japanese architecture will know that these ancient temples are built to the same principle as modern Tokyo's urban megastructures, designed to withhold the strain of earthquakes. Iwasaki’s model, too, is built according to similar specifications.

“If the structure is disturbed, it will move but not be damaged,” says Crothers. “Here again, it’s referring to the ancient idea of strength within flexibility.”

Reflection Model (Itsukushima) is at NGV until April 6. Entry is free.