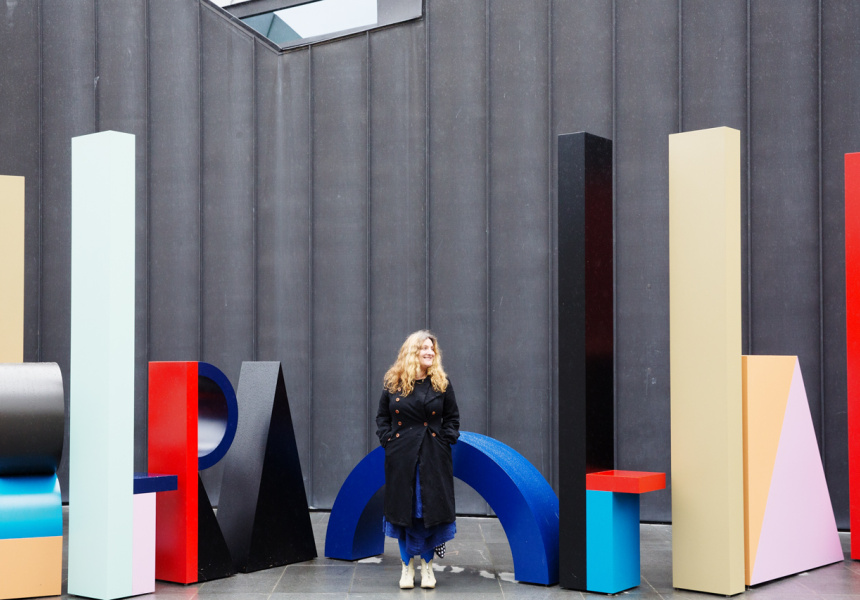 Emily Floyd’s father was a toymaker. From an early age she and her brother helped assemble brightly coloured blocks at his Melbourne workshop, which smelled of pine, and where hulking machines cut wood into elemental shapes: circles, squares and triangles.

Those toys – their geometric forms; their vivid, basic colours; their association with kindergartens and childhood learning – would end up an inspiration for Floyd. Her critically acclaimed artwork often employs those objects, but on an exaggerated scale.

Floyd kept the heirloom machines. The sculptures she made with them are currently on show at the Heide Museum of Modern Art in Far Rainbow, a survey of Floyd’s career over the last decade. “When you’re older or dead, they’re called a retrospective; when you’re still alive or younger, they call it a survey,” Floyd jokes.

Heide is not the only big gallery giving Floyd an expansive review this year; the National Gallery of Victoria will show more of her work in a complimentary survey entitled The Dawn, in November.

Floyd is one of Australia’s best-known artists, and her work – highly conceptual, visually arresting and often epic in scale – is held by institutions from the National Gallery of Australia to The Victoria and Albert Museum in London. Somewhere between Dandenong and Keysborough, just to the side of the Eastlink Motorway, there’s a colossal steel sculpture of a black bird and a bright yellow worm – that’s a Floyd.

The show at Heide is sleek but nostalgic, anchored by an archive of material that Floyd inherited from her mother, about the politics and history of organised childcare in Australia. Floyd believes it was a movement that really changed our culture, but which, in her opinion, failed to reap the acknowledgement it deserved at the time.

In addition to community activism, Far Rainbow examines themes that have been present in Floyd’s art for years, such as modernism, technology, socialist utopianism and alternative theories of learning. She is cerebral and a rigorous researcher; her art is multi-layered, requiring various levels of decoding. But because it’s aesthetically striking and playful, it can be enjoyed at face value, too.

Far Rainbow takes its title from a Soviet science-fiction story published in the 1960s. The elemental forms Floyd repeats throughout her show take inspiration not only from the toys of her childhood, but also from the cover of this paperback. The cover of the 1967 edition, on display at Heide, is laden with motifs common in Russian Constructivism including geometric shapes, bold typeface and bright colours.

Those elements are all on show in Abstract Labor, Floyd’s new 15-metre-long outdoor sculpture, which is made up of 14 giant aluminium letter shapes. Alphabet letters have been a part of Floyd’s repertoire since the early 2000s, often assembled as rubble around or at the foot of her sculptures.

Large-scale sculpture, such as Abstract Labor, is a signature of Floyd’s career. “I think that is one aspect of feminist art that has been under-explored, this idea of big things occupying public space,” she says. “There was a particular movement that said: I am here, outside, making a modern gesture. And the scale of it is really important to that movement,” she adds, citing the work of Australia’s Inge King and America’s Nancy Holt.

Floyd says the king-sized geometric forms and letters in the exhibition also echo the oversized instructional objects she has seen used in Montessori educational institutions.

Because she has been so prolific, and because so much of her work is commissioned for outdoor spaces, many Melburnians will have seen Floyd’s work before. However, the show at Heide represents a significant departure from the way her art is typically exhibited.

“Each room is like a world, rather than a showcase of sculpture, which is the way I’ve worked in the past,” she says.

In one of Heide’s largest galleries, for example, Floyd has painted ceiling-high triangles directly onto the wall in vivid yellows, reds, oranges, blues and greens. The work’s title, Help from the Periphery, refers to a Montessori-school concept about how children interpret their reality. A series of 40 fluorescent screen prints also line the same walls, while huge geometrical plywood shapes sit in the centre of the room atop long tables that span the length of the gallery.

“The creation of total environment is a new thing for me,” she says.

The screen-print series is called Ripple, which is the name of a little-known broadsheet produced by the Community Child Care Movement in Melbourne between 1976 and 1982, which Floyd’s activist mother worked on. Ripple encouraged collective action as the means to achieve better childcare services and consequently social liberation for women.

“I was trying to add something autobiographical that might help make sense of older works, and open that history up,” Floyd says of the prints. “I think the things women do take a long time to come to light because they’re not respected in the same way. There’s a history there that would not otherwise be known.”