Toing and Froing with THEESatisfaction

We talked to Seattle-based hip-hoppers THEESatisfaction about love and collaboration ahead of their Australian tour. 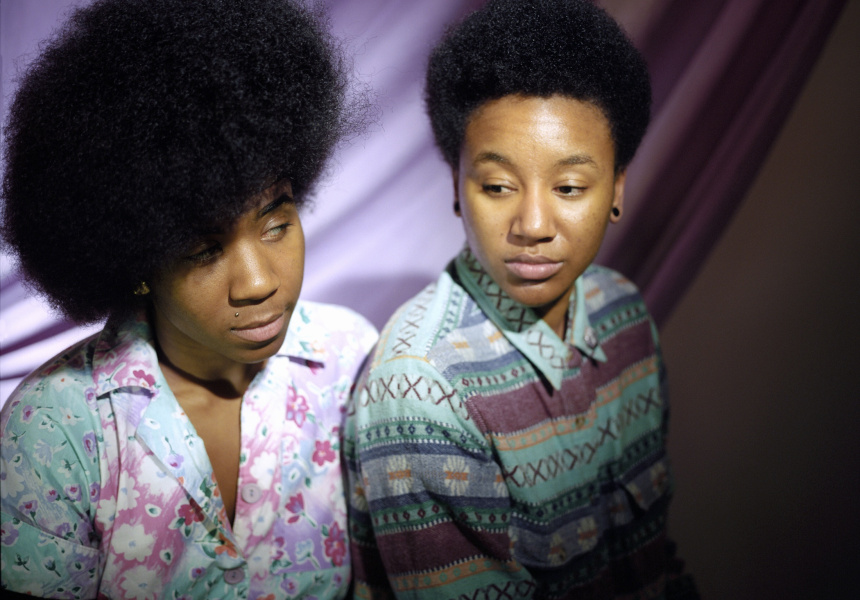 It was a series of quick decisions that entangled the lives of Stasia Irons and Katherine Harris-White. Together, they are THEESatisfaction, a Seattle-based cosmic hip-hop duo who have covered an extraordinary amount of cultural, political and musical ground in a short time.

Chatting from her home in Seattle, Irons recalls the series of decisions that saw them become partners, both romantically and professionally. “We started as friends, then we started dating, then we worked at a coffee shop and a grocery store together, and then we started making music,” she laughs in her distinctly smooth Seattleite accent. “So…yeah, it was just the natural progression.”

It’s a progression that hasn’t gone unnoticed. THEESatisfaction’s self-produced debut album, awE naturalE, has turned heads with its expansions on typical 90s hip-hop conventions. Its looped electronic beats and intonations, sprawling sonic arrangements and soaring, vocal drifts recall the lateral neo-soul explorations of Georgia Anne Muldrow and Erykah Badu as much as they do Sa-Ra.

Irons and Harris-White (aka Stas and Kat) are enjoying some time-off after touring Europe and America’s southwest, before they head to Australia in October. They take turns at answering questions and offer unexpected courtesies like “this is Kat by the way,” or “would you like me to spell that for you”. It’s obvious that they’re used to being mixed up together and mistaken for each other.

After meeting at The University of Washington about five years ago, Irons went to watch Harris-White sing at a local bar and developed a crush. “I used to do poetry and Kat would sing – she was in a couple of bands. So we put our minds together,” says Irons.

At odds with their polite demeanour is a debut full of political punch, leaping between locked down grooves, suspended melodies and esoteric lyrics. On one track, QueenS, the pair explicitly remove themselves from the swaggering, over-confident lyrics that plague contemporary hip-hop, ordering: “leave your face at the door/turn off your swag”.

Across the 13 tracks, awE naturalE effortlessly twists and turns in and out of genres. Most songs find their roots in 80s and 90s rap and RnB, inspired by groups like “New Edition, Blackstreet” and A Tribe Called Quest main man Q-Tip, while the rest borrow from such diverse sources as master lyricist Ursula Rucker and even Bob Marley.

However you describe THEESatisfaction, their energetic, psychedelic, feminist, jazz-hop is hard to ignore. They were one of the most hyped acts at South by South West in Texas this year and they’ll be bringing the same, love-addled energy to Australia this October.

THEESatisfaction are playing at The Hi-Fi Bar, as a part of the Melbourne Festival on Thursday October 18.