A new painting exhibition that opened at Kick Gallery on Election Day captures a sense of nostalgia for a more optimistic time in Australia. 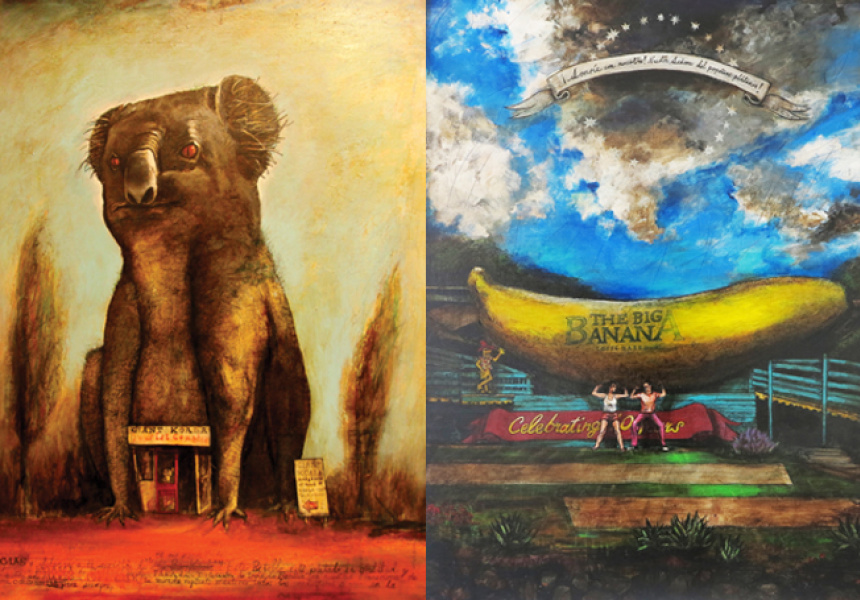 Tim Vagg’s paintings reveal an interplay of mythology and everyday life that is inclined to make you a little sentimental about growing up in Australia. Vagg’s 10th solo show at Kick Gallery takes An Unholy Pilgrimage to Australia’s ‘Big Things’ as its subtitle, referring to those outer sentinels of Australian kitsch culture that preside over our highways and towns.

Many of these labour-intensive sculptures were built from the 1960s to the tail end of the golden age of Australian Tourism, the 1980s. For millions of children (and some adults), The Big Pineapple and The Big Banana – those delicious totems of the tropical gods – were monuments to get excited about and the most breathless photo-opportunity on many a long car trip up and down the east coast of Australia. Regional and rural Australia’s answer to the Opera House and Luna Park, some of these temples to populism (including The Big Pineapple) have since been heritage-listed.

Here, Vagg re-imagines them on canvas, shifting postcard aesthetics to the realm of fine art. He portrays each monument as a patron saint to the national psyche and by extension, our tradition of egalitarianism and humour. He reinforces the colourful appeal of vintage Australiana and spikes it with references to Latin American folk art, such as the Nicho, a decorative box used to display religious icons. The Big Pineapple Devotional Nicho is framed in hand-carved oak and poplar, scattered with frangipani motifs that are redolent of airbrushed surfboards and sun-soaked gardens. Spanish prayers assign the scene with devotional meaning fit for Aussie vernacular: ‘Praise the Big Pineapple!’ and ‘I pine for you!’

Familiar archetypes are observed with comic-strip accuracy, capturing the spirit of the carnivalesque. Figures slouch and pose for their own amusement, seemingly caught unaware. Open blue skies recall Italian fresco ceilings, lifting the material to sublime heights, as well as heightening the sense of illusion.

The Giant Koala becomes a red-eyed prophet of Doomsday, his pouch now home to a ‘tourist complex’ with a faded, hand-painted sign. The Big Ned Kelly Devotional Retablo is the ultimate homage to roadside motels and our most legendary outlaw. If you peer closely at the painting you can read the depicted Maryborough motel’s slogan: ‘Where you’re treated like one of the gang’, an inclusive sentiment which has been sadly absent from national politics of late.

Postcards from the Holy Land invites us to reflect on who and what we idolise in Australia. The show’s timing could not be more perfect.

Postcards from the Holy Land runs until September 21.