Through a Glass Darkly

Yhonnie Scarce’s new exhibition of glasswork reveals a forgotten side to Australia’s dark history, drawn directly from her own family’s experiences. 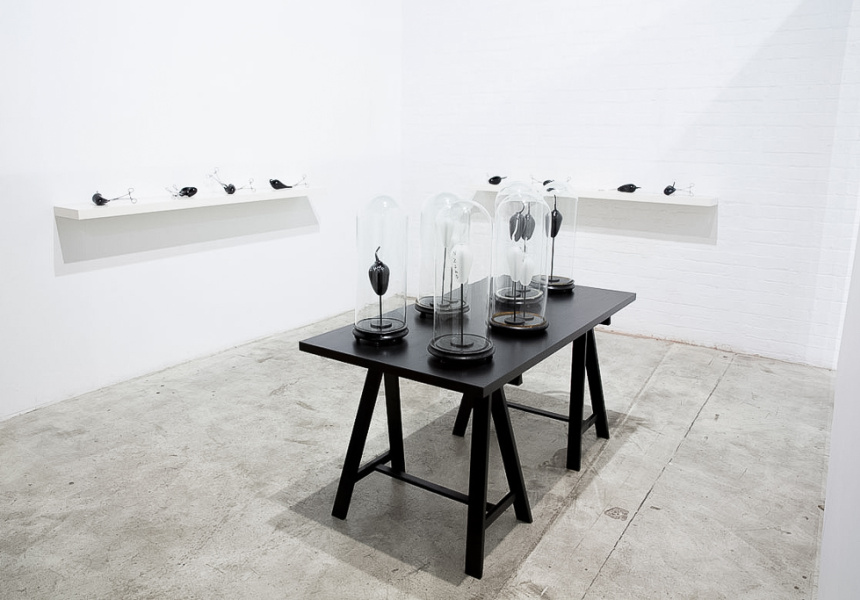 During the 1930s Australian ethnologist Norman Tindale conducted a series of experiments on Indigenous Australians to determine what constituted ‘aboriginality’. He measured their craniums, arms, legs, fingers, eyes and mouths and collected samples of their hair and saliva. He took photographs – front-on and in profile, as in a police mugshot – and gave each person a number. To Tindale, they were numbers. To Australian artist Yhonnie Scarce, they were, and are, people. More specifically, they’re her family: her great-grandmother, great-grandfather and grandfather.

Scarce has reclaimed their photographs for The Silence of Others, her new exhibition at Dianne Tanzer Gallery + Projects. The images, printed on glass domes, are presented as the scientific specimens they were once considered to be by some. Next to them, also under a dome, are glass-blown yams. These might be odd additions if not for one uncomfortable fact: until 1967, Indigenous Australians existed under the Flora and Fauna Act, making them equivalent, by law, to something like a yam.

In addition to the photographs, Scarce accessed the documents Tindale kept while examining his subjects. From them she discovered that Tindale was particularly interested in the length of the tongue belonging to N2402 – Scarce’s great-grandmother, Melba. Through his measurements and calculations, he determined that she was 5/8ths Aboriginal. In Scarce’s glass dome Melba’s photo appears old and cracked – a fading relic of the past. But Tindale’s misguided scrutiny of racial essence and purity is still all too present.

“I've had to deal with something fairly similar,” Scarce says. “Because I have fair skin and blue eyes, and because I'm not a stereotypical-looking Aboriginal person, with dark skin, dark eyes and curly hair. Quite often I come across people who say, "Well, you don't look Aboriginal." So there's that questioning of identity. Even though it may sound a little different to what my ancestors would have put up with, I think it can be very similar as well.”

Compared to some of Scarce’s earlier work, which treads the territory of massacres and mass graves, The Silence of Others might at first appear gentler. It is, however, the clinical and scientific air of calm and reason that makes the exhibition all the more sinister. Scientific experimentation with and examination of Indigenous Australians was invasive and oppressive – an insidious form of discrimination, which, while not as outright violent as others, still leads to trauma and anger.

“It does frustrate me a lot,” Scarce says, “but I feel like I'm in a really good position to talk about these issues as well. It's not just about me – these works are about my family – but there are a lot of Aboriginal people who have the same history as I do, in terms of where Tindale is involved.”

The exhibition also includes a series of glass-blown bush bananas propped up on metal stands under glass domes. Drawn on their surfaces are Tindale’s numbers for Scarce’s family members. Joining them is Silence, a series of black, blown-glass works which have been pinched, twisted and manipulated, forceps still clinging on. They represent Indigenous Australian people. It’s a testament to Scarce’s skill with form and concept that the simple manipulation of glass – a natural process of glassblowing – can end up almost painful to look at.

The Silence of Others shows at Dianne Tanzer Gallery + Projects until June 21.