Those Who Make Nite Art

Melbourne galleries will be opening their doors right through the night. So what are the artists bringing to the party? 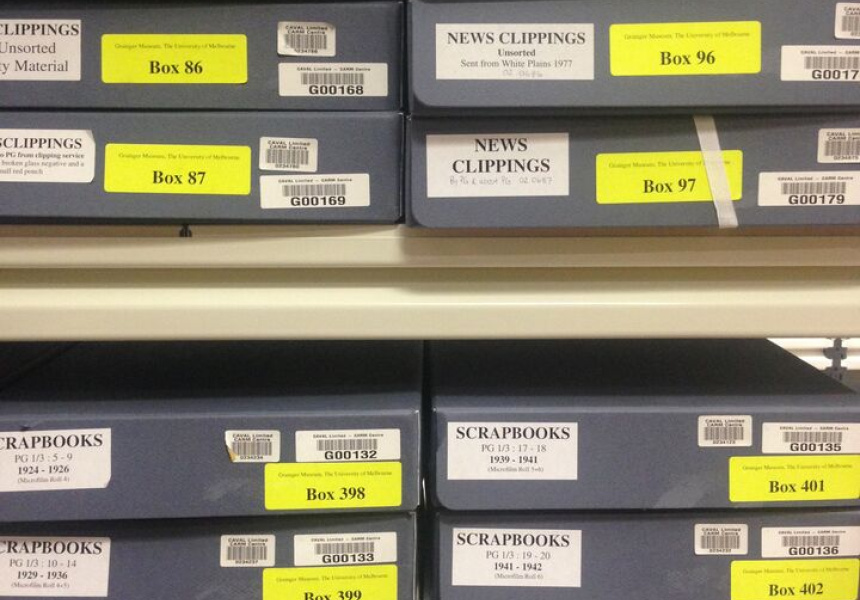 If we’ve learned anything from White Night, Bowie Late Nights and the NGV’s Friday Nights series: people in Melbourne love art after dark.

We chat to some of the artists involved to find out what they’re bringing this Nite Art, and what they’re hanging out to see too.

Patrick Pound
Patrick Pound is a collector of odd ephemera from eBay and other online bargain bins, which he then curates into strange new collections, giving them new context and new life. For Nite Art, Pound is taking over the Grainger Museum, the home of the private artefacts of the eccentric Australian composer and pianist Percy Grainger.

Pound says: "Percy Grainger's collecting habit is what drew me to him. He saved everything. The museum itself was his idea. It’s a piece of autobiography, but through things rather than words. Everything is here, from books and clothes to his incontinence clamp, bits of half-used soap, and the hospital wristband that was by his bed when he died.

I’m not changing anything of his, I’m putting these items to work telling different stories.

Some things are his, and some are mine. He had collections of photos of every home he had in Australia, and of photos of the ocean viewed from boats. Next to that there are photos from my collection: old double exposures, and shots where the camera case obscures the image … I like that you can’t tell where his collection ends and my additions start.

Grainger was an avant-garde musician of the first order, and also a free thinker. He made clothes. He walked 20 miles to performances, and slept under the stars.

He was also a self-flagellator. Along with his collection of whips, I’m displaying plastic toy weapons, my collection of Blade weapon magazines, and the knife that he kept by his bed at the end of his life. I’m not trying to accentuate the weird stuff. I just put my things alongside them."

Josh Robbins
Josh Robbins’ paintings depict vibrant, surreal birds that appear to be falling apart before our eyes. In fact, they’re drawn blind. Robbins doesn’t look at the canvas until he’s ready to paint over his pencil lines. For Nite Art, Robbins will be running a blind drawing workshop at Flinders Lane Gallery.

There’s no symbolism or social commentary, or any other layer like that. I just like to be able to paint on a whim, and see how it turns out.

I initially painted on plywood, and used the grain of the wood to dictate the shapes of the tree branches I was drawing. I liked how the medium was leading the way. After that, it was no genius move to put birds in the trees. Trees lead to birds, and blindness leads to the aesthetic being pulled apart. The more detail the bird’s feathers have, the more abstracted the result is going to be.

I’ve always loved blind drawing. I like the way it distorts the aesthetic, but the artist isn't deliberately distorting it. It happens naturally. These images are loose and tight at the same time. A lot of my work is informed by the way the audience look at it as well. In my recent Flinders Lane Gallery show, I enjoyed that people were looking closely and then backing away and then going in close again. I like that physicality."

Julia Weissenberg
German artist Julia Weissenberg will be presenting Nothing to Retain, a two-channel video artwork. Housed in the controversial Total House building on Russell Street, the piece explores the crossovers between architecture and media technology.

Weissenberg says: "My piece is shot at a temporary replica of a Mies van der Rohe building in Krefeld, Germany. The original draft for the building was designed in the 1920s, but for economic reasons it was never built. In 2013, a full-size model was constructed at the original location.

My starting point was a fascination. I’ve always been interested in the relation between the impulse to capture things, ideas or plans—and therefore to conserve them—and the ephemeral. This building was originally planned to become a clubhouse for a golf course, but it’s now agricultural land. This made me think of the temporality of construction plans and ideas, and also of the absurdity of the whole intention.

There's currently a controversy over the exhibition site, Total House, between those who would like to preserve the building for heritage and the owner, who would like to develop it. So the play in my work between permanence and impermanence seems to be relevant to this particular site.

I think at the moment a lot of cities are confronted with these kinds of questions. For instance, in Germany there is discussion about the demolition of the Palast der Republik and the reconstruction of the Stadtschloss in Berlin. Architecture has a political function. It’s used to create or to avoid a certain kind of memory."

Nite Art is on today, Thursday June 23 from 6pm until late. Opening times vary. Most events are free, although a few do require advance booking.