Before any experimental band breaks new ground, there are unfruitful tangents and moments of greatness. We spoke to Dirty Projectors’ Amber Coffman about their latest and more ‘normal’ release, Swing Lo Magellan – just ahead of their tour down under for Sugar Mountain Festival this weekend. 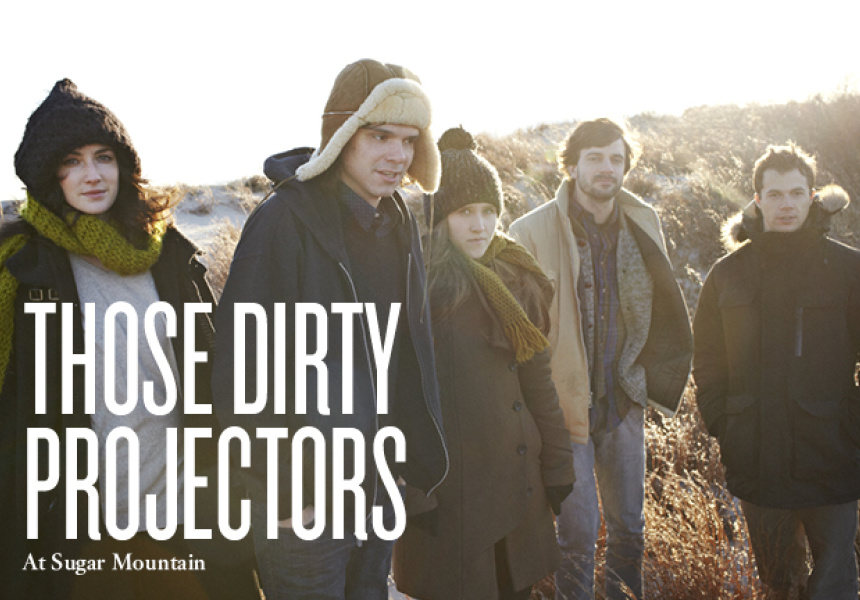 Amber Coffman is in Brooklyn, New York when we speak on the phone, still trying to digest her Australian big breakfast. Just down the street, there’s a little cafe owned by a pair of Australians, and whenever Dirty Projectors are back from tour, Coffman likes to stroll down and pay them a visit. “They have beets and eggs on their burgers – isn’t that how the Australian’s do it? It’s really good,” she says.

Coffman has vivid memories of Melbourne, and like her Australian neighbors in New York’s most populated borough, she is looking forward to returning. Last time Dirty Projectors came to Melbourne, Coffman was an unfortunate victim of the hailstorm that is still causing the insurance companies headaches today. “I had welts on my legs,” she recalls in a rather sketchy tone. “We were out walking, and I was wearing a dress. It started hailing we had to take shelter on somebody’s porch.”

Coffman is the right hand lady to David Longstreth, the American singer-songwriter who founded Dirty Projectors some 11 years ago while studying at Yale University. Longstreth is the creative director of the band, writing, producing and mixing almost all of their seven albums himself. They’re a happy dictatorship – an enigmatic frontman and an accomplished backing band.

If Longstreth is the creative director, Coffman is the confidant. She’s rarely more than a few feet away from Longstreth during live performances and acts as a palatable string to his curious (and sometimes painfully eccentric) bow, often bringing Dirty Projectors’ experimental work back from the brink of madness.

If you’ve heard Dirty Projectors back catalogue, you’ll have noted that it has all the hallmarks of great innovation. At times, Longstreth’s experimental wanderings have led him on unfruitful tangents. Other times, though, the painful or pretentious subsides and you’re left with true clarity. The band rarely goes back over old ground, moving from album to album like excited school kids who just can’t make up their mind.

And if you’re to look at Dirty Projectors body of work impartially, it seems they were distracted from the get go. Their first album, The Getty Address, is a concept album devoted to Don Henley. It’s a journey full of hits and misses, sometimes visceral and confused, sometimes concise and brilliant. And since their early concept albums (The Getty Address and their follow up, Rise Above, which re-interpreted the songs of 1970s hardcore band Black Flag), Longstreth has continued on an unusual path.

Lately, Dirty Projectors have taken a more conventional path, releasing their songs in a more widely recorgnised format. The band’s latest release, Swing Lo Magellan, is perhaps their most regular album to date. There is a genuine continuity in the music, framed by Coffman’s dynamic guitar lines and powerful harmonic backing vocals.

Towards the end of our conversation, Coffman tells me that there is always some nerves when you visit a new country, or play somewhere new. Much like Dirty Projectors’ music, touring is an experiment that doesn’t always pay off. “The first few times you go anywhere is because you’re going there to build something. It’s always a bit of a gamble when you go somewhere new,“ she says.

But Dirty Projectors are tried and tested in Australia, and Coffman is more than excited to be growing the fan base at Sugar Mountain Festival this weekend. “Maybe it’s an experiment the first few times,” she says on coming back to Melbourne. “But then you kind of believe what they’re telling you.”

Dirty Projectors are performing this Saturday January 19 at the Forum Theatre in Melbourne, for the Sugar Mountain Festival.