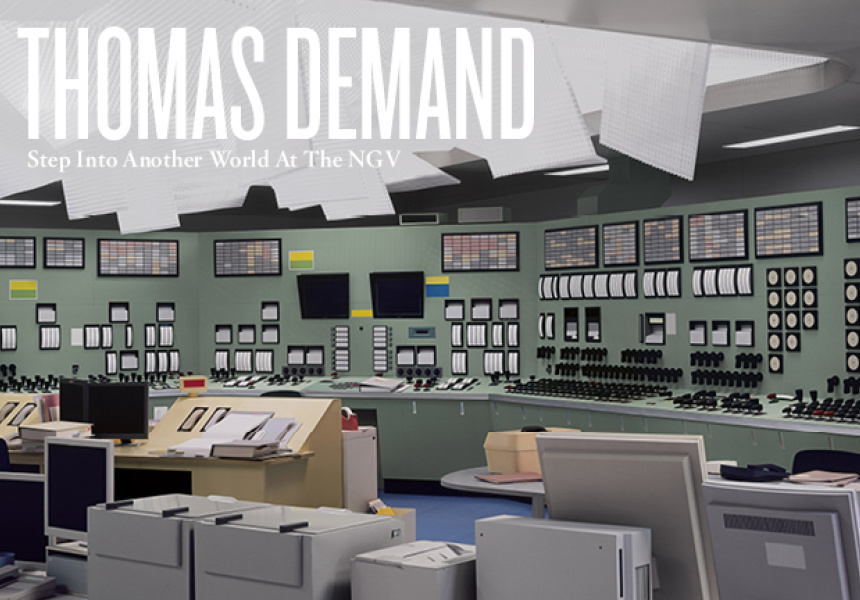 There’s something not quite right here. The light is almost convincing enough – the warm afternoon sun and dappled shadows dancing amid the dense, twists and knots of leaves and foliage. But even then, there’s something ever so slightly askew. Perhaps it's the colours; the greens just that tad too inorganic. Or perhaps it’s leaves; their edges just that tiny bit too clean.

Even with the benefit of background and context, the monumentally scaled photographs of Thomas Demand induce a kind of quiet, speculative sense of surprise and unease. That the vistas, interiors, machinery and various other objects and scenes that score the German artist’s photographs are in fact meticulously constructed paper sculptures – made, quite remarkably, to scale in his studio before their eventual, post-photograph destruction – transports his work to a whole new plane.

Indeed, standing before Lichtung/Clearing (2003), the vast photograph that welcomes you on entering the eponymous Thomas Demand survey, which opened last Friday at the National Gallery of Victoria, the leaves aren’t quite right precisely because they was never there. While contemporary discourse has long brought the idea of a photograph’s indexical relationship to its subject into question, Demand complicates the notion to acute effect. The subjects of his images are one step further removed.

This is most certainly the entry point to Demand’s oeuvre. Wandering this stunningly realised show – curated by Susan van Wyk and organised with the Museum of Contemporary Art, Tokyo – it’s hard not to be astounded by his practice. The drape of shower curtain, the sheen of bathroom tiles and the film suds atop the bathwater in Badezimmer/Bathroom (1997) transport an otherwise non-descript vantage somewhere awe-inspiring, as does the dull office environment and now-antiquated technology of Copyshop (1999), which articulates the sheer scale of its sculptural source material.

Much of Demand’s earlier works operate in this mode, rephrasing mundane scenes and environments – be they the geometrical patterns of pegboard or the lush green of a suburban lawn – to engender a skewed, otherworldly cadence. But it’s the later works, which offer uncanny vantages and reconstructions of sites that have played a sometimes-covert role in our recent collective public consciousness, that really resonate here.

The remarkable stop-animation film Pacific Sun (2012) – which recasts a cruise ship’s CCTV footage of the interior furniture being tossed about in a violent storm – is remarkable and disorienting for its sheer detail and realism, as is Space Simulator (2003) for its matter-of-fact vantage on a highly specialised piece of equipment usually shielded from the public gaze.

But it’s a work in the final room that proves the most affecting. At a glance Kontrollraum/Control Room (2011) is a masterful image on its own – the odd, dated colour scheme, banks of knobs, dials and gauges satisfying our imaginings of what the interior of a power plant or some other immense piece of industrial infrastructure must resemble. That Demand’s sculpture and, indeed, photograph in fact render the evacuated control room of the Fukushima nuclear power plant in the wake of the Great East Japan Earthquake and Tsunami gives this scene an acute poignancy.

It’s stillness and emptiness speaks of an unnerving truth that the dramatic photographic images that pepper popular culture fail to grasp. It lacks the iconicity of news media images of ravaged plains, destroyed cities and smoking ruins, but it reconstructs, pictures and considers the very facility and site that may yet prove to be the biggest killer of them all.

By rendering objects and images that are essentially ‘unreal’, Demand stipulates that we must contemplate reality with much greater attention, consideration and care.

Thomas Demand shows at the National Gallery of Victoria until March 17, 2013.