The Theatre of the World Comes to MONA 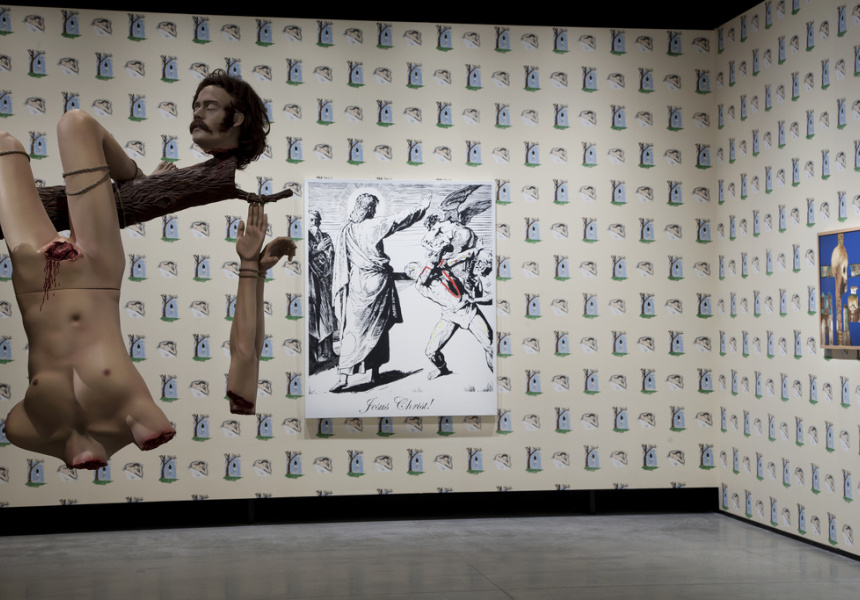 It’s in a vast rectangular space, deep within the lowest of MONA’s three subterranean levels, that new exhibition The Theatre of the World conjures its most powerful, if not troubling statement. Lining the slanted walls of the spacious gallery are a sprawling collection of impossibly fragile, intricate and exquisitely patterned traditional barkcloths (or ‘tapa’) from the indigenous peoples of Fiji, Samoa, Papua New Guinea, Solomon Islands, Tahiti and Vanuatu.

They are on loan from the Tasmanian Museum and Art Gallery’s (TMAG) immense, but relatively little known collection from the 19th and early 20th century and they forge an immersive, haunting experience. That these artefacts – which served purposes such as ceremonial clothing, swathes with which to wrap sacred objects or even the deceased – are buried deep within the Hobart museum’s tomb is alternately entrancing and disquieting. That the grand Coffin of Iret Heru-ru (Egypt, late 26th Dynasty, c. 600–5535 BCE) and the sinewy, totem-like sculpture Grande Figurine (Femme Leoni) (1947) by late Swiss artist Alberto Giacometti – two works spanning millennia – face off at opposite ends of the space make it all the more arcane.

This, one might suggest, is displacement of highest order – a kind of culture jam of that created by the now deceased. It is also Theatre of the World curator Jean-Hubert Martin’s signature.

The Frenchman’s now legendary exhibition Magiciens de la terre was a groundbreaking moment in modern art. The 1989 show at the Pompidou in Paris was the first major exhibition to set contemporary Western art against practices rising from the ‘margins’ of Asia, Africa, Latin America and Australia, and showcased Martin’s lateral approach to art history. In wandering The Theatre of the World’s 16 gallery spaces and wunderkammer of countless counterpoised artworks and objects (around 300 of which were selected from the TMAG collection and 180 from David Walsh’s private collection), it becomes little surprise that Walsh – the emphatically wealthy, eccentric and (according to a trusted source) masterful table tennis player behind this sprawling underground edifice – cites Martin’s unusual approach to art as one of his major inspirations for creating MONA in the first place.

Like Walsh, Martin’s decisions and considerations sweep across and actively contravene traditional Western art discourses and lineages. He engages with art from a distinctly visual, comparative and poetic vantage, as if a “chain of associations that brings you from one idea to another”.

“I have a tendency to be attracted by quite atypical objects, quite strange objects,” explained Martin, who worked alongside Dutch exhibition designer Tijs Visser in the creation of Theatre of the World, after our tour of this dark, playful, almost cinematic experience. “I look for the visual efficiency of the object or painting or image or something like that. Then, of course, it was not about the work in a singular sense, but looking at what I could combine with another one or two or three things.”

It’s an attitude that manifests throughout The Theatre of the World’s maze of small and large, dim and glaring spaces, each loosely themed toward a human, animalistic or emotional compulsion or state of being. There’s the “death room”, where ancient Cretian and Egyptian coffins rest alongside one of Belgian artist Berlinde de Bruyckere’s pallid, wax, corpse-like sculptures and one of Melbourne artist Tony Garifalakis’s frightful, blacked-out posters, the subject’s eyes and ravenous mouth the decipherable cues. There’s the room of mourning, with Andres Serrano’s infamous morgue photographs alongside a cabinet of bones; the ode to shamanism and ritualism replete with Basquiat, Nolan’s Ape and Elephant and Max Ernst’s L’imbecile literally plonked on top of a 4th millennium BCE Syrian deity.

Deeper still, there’s violence and terror: the Chapman Brothers’ dismembered mannequins, Nolan’s frightful Crucifix and one of Wim Delvoye’s tattooed pigs. Elsewhere, spotlights illuminate a cavalcade of tribal masks of various cultures and eras, one by one, while Picasso’s Weeping Woman (on loan from the NGV) forges an odd taxonomy with a collection of beaded Nigerian bags and garments, each of which sport eyes as their key motif.

It’s easy to become swept up in this resolutely visual exhibition. The connections and dialogues between this disparate collection of works is for us to make. Martin has often spoken of art’s need to transcend “the docile museum”, or in layman’s terms, the staid, academic inclinations of art’s institutional gatekeepers. “I want to show the visitor the same excitement and emotion and interest that I had by discovering these objects,” he urged at the conclusion of our tour.

This, he achieves. As does Walsh in his grand venture. In loosening art and artefact of the shackles of culture and lineages of art history, Theatre of the World rightly claims its prize. It’s all very impressive and spectacular (as is the opulent, almost obscene, medieval-style feast at the opening party).

But back in the gallery, standing amid the enchanting barkcloths of poor island nations near and far, the moral of this story still seems an odd one. For all the talk of subverting and liberalising the directives of art history, it all seems something of a one-way street. Rich guys from rich Western countries can still entertain themselves and those around them with whatever the hell they want.