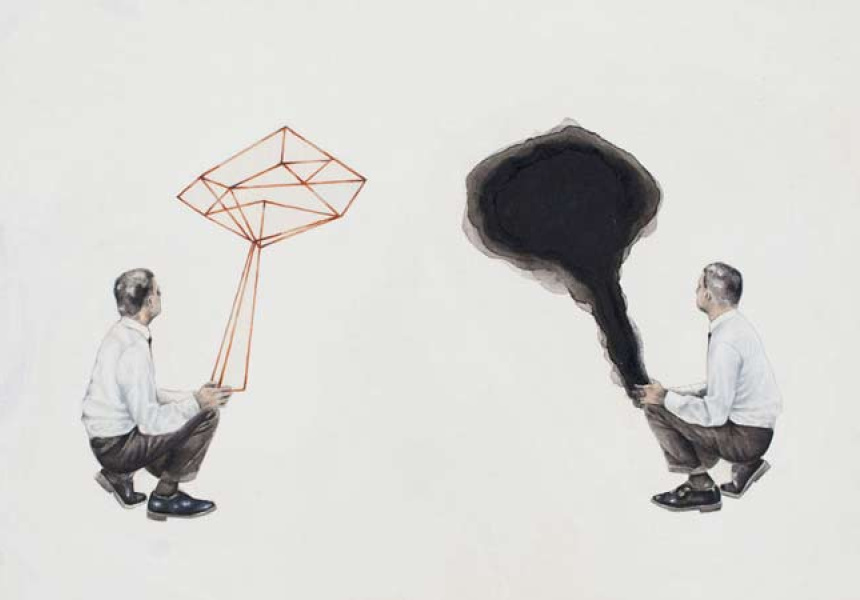 “I don’t feel the need to make big art,” says Treloar. “I don’t want my work to be some massive statement of intent.”

The suite of graphite, watercolour and ink-on-paper works comprising his new exhibition at Prahran’s Helen Gory Galerie describe the world via subtle repetitions, dualities and the economising of unnecessary details.

“This notion of big paintings with bright colours and a lot of detail almost spelled out for you, I find it a real barrier,” he says. “Our visual culture is already so huge. I mean, I can walk through Sydney and see Kyle Sandilands’ head on a 30-metre by 30-metre billboard.

“I really relate to literature in that sense,” he continues. “A book is small, but it contains huge ideas and scope and feeling. These are tiny objects that contain worlds that are vast.”

It’s an idea that echoes throughout The Science, Treloar’s first major Melbourne show. His “archetypal” men – the source imagery for which Treloar garners from post-war Sears and JC Penny catalogues from the US, and the NASA image library – espouse a kind of lurking, though unmistakable, sense of disquiet. Some are subsumed in the opaque blankness of their backdrops. Others haunted by a nebulous black void, an “ambiguous menace”. There are few clear cues; narrative strands remain untied. But this is the precise point.

“I’m engaging with ideas of mystery and absence and tension,” he explains. “It’s this thing that’s always there in the works, but how people relate to that is totally up to them and their own experience. I try and make work that is driven by empathy. I don’t want to confound people, I just want people to think.”

Teo Treloar’s The Science opens tonight alongside Will Nolan’s Everything Is Melting and runs until October 23 at Helen Gory Galerie.