The Kamilaroi/Gamilaroi artist’s newest video work, presented at Rising festival, sees him cruising the western suburbs in a pink Monaro, reframing his initiation into manhood. 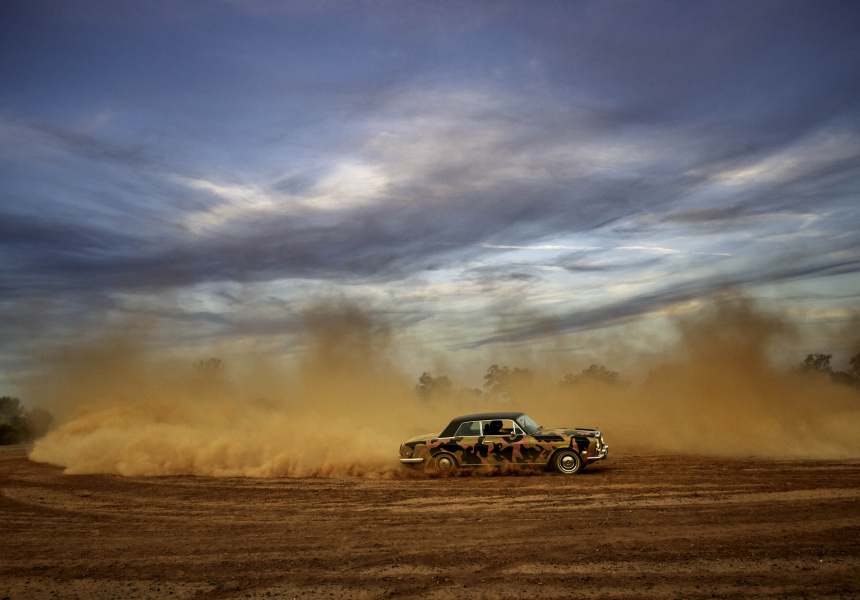 Photography: Courtesy of Rising / Reko Rennie and Justin McManus
by Will Cox
Share

Reko Rennie’s work permeates Melbourne like tattoos on skin. His distinctive art has adorned gallery walls, trams, elevator shafts and has even been buried in the foundations of buildings. Visible or invisible, it’s always lurking. Without knowing Rennie’s name, you may be aware that you’re in his town.

His latest work is an ode to where he’s from, and an exorcism of complicated memories. Commissioned by Rising, the new three-channel video, projected onto the wall of the Golden Square Car Park, sees Rennie behind the wheel of a hot pink Holden Monaro, cruising around the streets of Footscray and Maribyrnong to a lavish operatic soundtrack. He’s returning to the sites of his childhood, reclaiming old ground.

“The west is my home,” Rennie tells me. “I did graffiti there. I got into trouble there. I was a young teen. I tested the boundaries like many others. This was a passage of initiation, and it wasn’t always positive.”

I meet Rennie at Di Stasio Città on Spring Street. Appropriately, the facade is adorned with a metres-high Rennie, Visible Invisible (2019), a loud, colourful statement in the neon camouflage he is known for. Inside, Rennie’s three-channel video work OA_RR (2017), an earlier counterpart to his new Rising work, plays on silent loop against the back wall. We’re very much on his ground here.

In OA_RR (OA stands for “original Aboriginal”) Rennie drives a Rolls-Royce Corniche adorned with his familiar camo motif through the traditional lands of his ancestral home, Kamilaroi/Gamilaroi country in northern New South Wales.

The new work, Initiation OA_RR, brings the narrative forward some decades to Rennie’s own youth in Footscray. He uses it to come to terms with his family history, confronting his own troubled adolescence and initiation into manhood.

“There’s a lot of trauma there,” he says. “This work is about survival, about initiation, about breaking down these old notions of masculinity. Keep your mouth shut. Don’t express emotion. That was being a man. It’s such bullshit. For me to unlearn that was a big thing.”

The soundtrack is an Italian-style opera translated into Rennie’s grandmother’s language and performed by renowned composer and opera singer Deborah Cheetham AO (Yorta Yorta). Rennie’s grandmother was forcibly removed from her parents as a child, then enslaved as a domestic servant by the white family that adopted her. The family blocked her, a talented soprano, from studying and pursuing music as a professional career.

Rennie says his grandmother’s story made him “angry, fiery”. “I didn’t know how to channel that as a young man. My grandmother was my caretaker while my mum worked six or seven days a week putting food on the table. That gave me this respect for the matriarch, and for women.”

By contrast, the Monaro was the masculine status symbol coveted by Rennie and his friends growing up in the west. The name “Monaro” was lifted from the Monaro region of NSW, and is said to be of Aboriginal origin, roughly translating as “higher plateau”. That’s a nice bit of synchronicity for Rennie, who was told as a kid he aimed too high.

In both film and interview, Rennie skips over the specifics of his youth. He’ll talk about it when he’s ready. He merely makes it clear that it wasn’t always easy and it wasn’t always fair.

“There was a fork in the road where I could have easily been another incarcerated statistic,” he says. But Rennie isn’t afraid of facing up to it.

I’m reminded of something he said to me last time we spoke: “The whole idea of camouflage is to conceal and hide and blend in,” he told me. “I want to make camo about not being invisible – proudly declaring who you are and where you’re from.”

Initiation OA_RR is showing at Golden Square Car Park from May 26 to June 6. Tickets are $23–$32 and include access to numerous other works within the complex.